A Regular Expression to a first time user, on instinct, does not appear 'regular' at all.

In this tutorial I take a dive into the world of Regular Expressions (RegEx) including the history, major components of RegEx followed by an example to help explain the application of RegEx in JavaScript.

I've chosen a useful regular expression that can be used when searching for an email address in text or validating a user's input:

Do note that the focus of this summary is exclusively the use of Regular Expression's in JavaScript. You will need to refer to other tutorials for other programming languages to understand the syntax for the regular expression pattern you are wanting to match in your selected programming language.

There are different 'flavours' of Regular Expression processors / engines. CMCDragonkai has a great Gist that has a very detailed table that communicates what each 'flavour' has for each programming language:

A Regular Expression (RegEx) is a pattern of characters created to either pattern-match or search and replace a given string of characters.

Regular Expressions provide a powerful, flexible, and efficient method for processing text. The extensive pattern-matching notation of regular expressions enables us to quickly parse large amounts of text to:

Regular Expression is essential to efficiently programmatically work with strings or when parsing large blocks of text.

Why? A History of RegEx

Sometimes it helps to have an appreciation of the origins of tools we frequently use to deepen our understanding of why they exist. Following is a history I've compiled from my review of Wikipedia's Regular Expression page

Among the first appearances of regular expressions in program form was when Ken Thompson built Kleene's notation as a means to match patterns in text files in the editor QED ( i.e Quick EDitor: a line-oriented computer text editor developed by Butler Lampson and L. Peter Deutsch for the Berkeley Timesharing System running on the SDS 940).

Regular Expression matching was then added to the Unix editor ed, which eventually led to the popular search tool grep's use of regular expressions.

"grep" is a word derived from the command for regular expression searching in the ed editor: g/re/p meaning "Global search for Regular Expression and Print matching lines".

Around the same time when Thompson developed QED, a group of researchers including Douglas T. Ross implemented a tool based on regular expressions that is used for lexical analysis in compiler design.

Many variations of the original forms of Regular Expressions were used in Unix programs at Bell Labs, including vi, lex, sed, AWK, and expr, and in other programs such as Emacs.

Part of the effort in the design of Raku (formerly named Perl 6) is to improve Perl's regex integration, and to increase the scope and capabilities to allow the definition of parsing expression grammars. The result is a mini-language called Raku rules, which are used to define Raku grammar as well as provide a tool to programmers in the language. These rules maintain existing features of Perl 5.x regexes, but also allow BNF-style definition of a recursive descent parser via sub-rules.

Regular Expressions were subsequently adopted by a wide range of programs, with these early forms standardized in the POSIX.2 standard.

Implementations of regex functionality is often called a regex engine, and a number of libraries are available for reuse. Several companies started to offer hardware compatible regex engines, faster than CPU implementations. Some examples were FPGA (a Field Programmable Gate Array is an integrated circuit designed to be configured by a customer after manufacturing) and GPU implementations of PCRE (Perl Compatible Regular Expressions).

Regular Expression support is part of the standard library of many programming languages, including Java and Python, and is built into the syntax of others, including Perl and ECMAScript (JavaScript).

In the JavaScript universe, a RegExp object is a pattern with properties and methods and you call the constructor function as follows:

The other way, probably the more frequently used method, is to use what is called a regular expression literal that encloses the search pattern between back-slashes:

Anchors are unique as they match a position within a string, not a character. They match a position before, after, or between characters. They can be used to “anchor” the regex match at a certain position. A regex that consists solely of an anchor can only find zero-length matches.

The caret ^ matches the position before the first character in the string. Applying ^a to abc matches a. ^b does not match abc at all, because the b cannot be matched right after the start of the string, matched by ^.

The $ matches right after the last character in the string. c$ matches c in abc, while a$ does not match at all.

Quantifiers indicate to the processor that the preceding token must be matched a certain number of times. By default, quantifiers will try to match as many characters as possible (greedy).

Groups allow you to combine a sequence of tokens to operate on them together. Capture groups can be referenced by a backreference and accessed separately in the results.

Bracket expressions [] are used to show character classes. They are essentially grouping a character class together and including the OR operator. For example [abc] tells the search to match "a" or "b" or "c".

A character class is a special notation that matches any symbol from a certain set.

To match whole words only, use \b(cat|dog)\b. This tells the regex engine to find a word boundary, then either cat or dog, and then another word boundary.

Modifiers instruct the processor with how to proceed with searching for the Regular Expression Pattern.

Escape sequences can be used to insert reserved, special, and unicode characters. All escaped characters begin with the \ character.

Character escapes are used to switch from a literal search to a special search, and vice versa.

I've selected an example that has a lot of every day programming application. The following Regular Expression will match or validate email addresses in a document or an input box:

What does it mean?

For validation, add the "^" anchor after the first "\b" anchor. This will confirm if a valid email has been entered with no whitespace or new lines at the start of the email. You also don't need the global "g" flag.

This example has 3 groups:

@ = located between Group 1 and Group 2 character sets, instructs Regular Expression engine to look for "@" character in between groups 1 and 2.

. = located between Group 2 and Group 3 character sets, instructs Regular Expression engine to look for "." character in between groups 2 and 3. The backslash is needed before to escape the character as "." has a special purpose, refer Character Classes

g = global, search continues after 1st match. i = shortens the Regular Expression as you can state a-z characters instead of A-Za-z for the search criteria.

The Character Class "\d" instructs RegEx to search for any digits 0-9.

The quantifier "+" outside the square brackets instructs RegEx that one of these must exist at least once (but could have more than one of these components in the string).

The quantifier "+" instruct RegEx that one of these must exist at least once (but could have more than one of these components in the string).

Searches for any of the literal characters "a-z", ".".

The Quantifier "{2,10}" instructs RegEx that one of these must exist at least two times and no more than 10 times.

Note: Whilst this quantifier will work for most domains, there are now so many domain alternatives that extend past 10 characters. This is a good example of choosing the right Regular Expression setting for your search or validation. A better Quantifier to use would be "{ 2, }". Have a look at this picture showing some of the alternatives to .com : 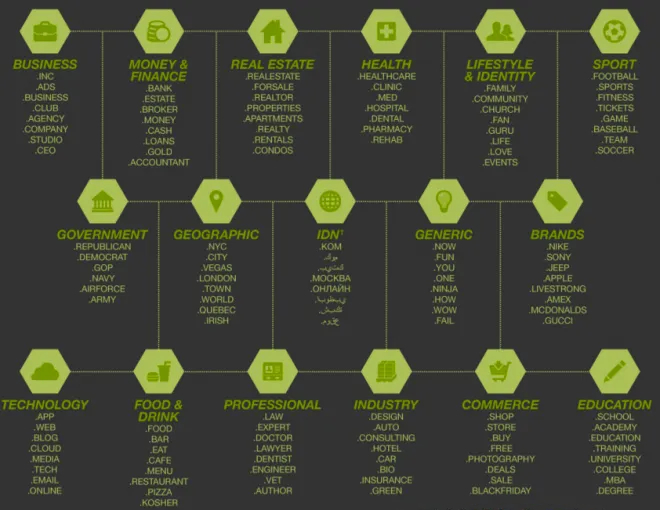 There is so much more to Regular Expressions than what I've covered here. Following are the various sources I referred to for this Gist.

I highly recommend RegExr. It is a great website to test your understanding of Regular Expressions and test if your Regular Expression will actually find or validate what you want using the 'sandbox' environment in the website.

Mark Watson is a programmer currently focused on learning JavaScript. If you have questions or would like to connect with me, please use one of the following: