Authentication means determining who a particular user is. Authorization means applying rules about what they can do. Blazor contains features for handling both aspects of this.

It worth remembering how the overall goals differ between server-side Blazor and client-side Blazor:

If you're creating a new server-side Blazor application, the project template can set up an authentication mechanism for you. During project creation, click on Change under Authentication.

This will open a dialog that offers the same set of authentication mechanisms available for other ASP.NET Core projects, i.e.:

The actual mechanism of authenticating the user, i.e., determining their identity using cookies or other information, is the same in Blazor as in any other ASP.NET Core application. So to control and customize any aspect of it, see documentation about authentication in ASP.NET Core.

The result is that your project will track the identity of the logged-in user. You can then apply authorization rules to users as described below. 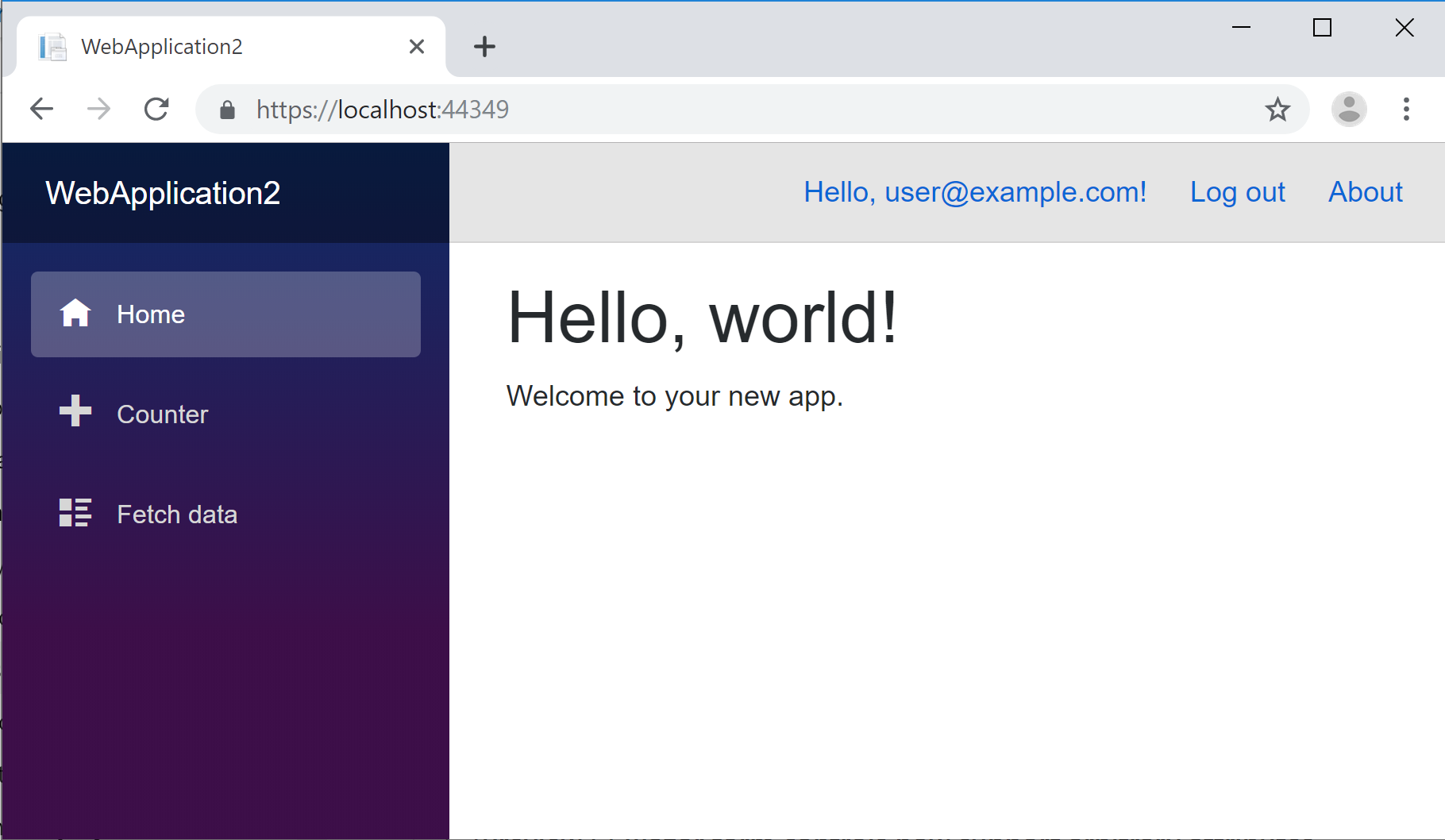 Accessing information about the current user

There are three ways to access information about the current user. Each is useful in different cases.

This is the simplest and most high-level way to access authentication data, and is useful when you only need to display the data, and don't need to use it in procedural logic.

The <AuthorizeView> component exposes a context variable of type AuthenticationState, which you can use to display information about the logged-in user:

You can also supply different content to be displayed if the user isn't authenticated:

The content doesn't have to be static HTML. It can include arbitrary items, such as other interactive components.

If you need to use authentication state data as part of procedural logic, such as when performing an action triggered by the user, then you should obtain it by receiving a cascaded parameter of type Task<AuthenticationState>.

Troubleshooting: If you receive a null value for authenticationStateTask, then then it's likely you didn't create your project using one of the authentication templates. In this case, you need to wrap a <CascadingAuthenticationState> around some part of your UI tree, for example in App.razor as follows:

This is the lowest-level way to access authentication state. In most cases you won't want to use this directly, as there are more convenient alternatives as described previously. However it's worth understanding that this exists, because it's the underlying feature that supports more high-level alternatives.

The AuthenticationStateProvider is a DI service that can give you the current user's ClaimsPrincipal data.

The main drawback to using AuthenticationStateProvider directly is that your component won't be notified automatically if the underlying authentication state data changes. That's why it's normally preferable to use the cascaded Task<AuthenticationState> instead.

So, if you're building a client-side Blazor application, or if your requirements are different in some other way, you could choose to implement your own AuthenticationStateProvider that gets data from some other source. For example,

You can register this with DI in your Startup class as follows:

With this custom AuthenticationStateProvider, all users will now be treated as authenticated with the username Some fake user.

Note that if you want to use <AuthorizeView> or a cascaded parameter of type Task<AuthenticationState>, then you still also need to ensure you have wrapped a <CascadingAuthenticationState> around the relevant part of your UI hierarchy, for example in App.razor.

Once you've determined who a user is, you can apply authorization rules to control what they can do.

Each of these concepts is the same as in ASP.NET Core MVC or Razor Pages.

For role-base authorization, use the Roles parameter. For more information, see documentation about user roles.

For policy-based authorization, use the Policy parameter. For more information, see documentation about policies. This explains how to define authorization policies. These APIs can be used with either server-side or client-side Blazor.

So, what content should <AuthorizeView> display while authentication is in progress? By default, it displays nothing. But if you want, you can specify some content to be displayed during this process:

Just like you can use [Authorize] with MVC controller or Razor pages, you can also use it with page components.

Important: it's only applicable to use [Authorize] on @page components reached via the router. Authorization is only performed as an aspect of routing, and not for child components rendered within a page. To authorize the display of specific parts within a page, use <AuthorizeView> instead.

Note that you may need to add @using Microsoft.AspNetCore.Authorization either to your page component or to _Imports.razor in order for this to compile.

For policy-based authorization, use the Policies parameter:

Customizing the display for unauthenticated users

The Router component allows you to specify custom content to be rendered if a user fails an [Authorize] condition, or while asynchronous authentication is in progress. In the default project templates, this can be found in your App.razor file:

As always, the content doesn't just have to be static HTML. You can include arbitrary content, such as interactive components.

If no NotAuthorizedContent is specified, then the router uses the following fallback message:

Known issue: In ASP.NET Core 3.0 Preview 6, it's not possible to specify custom NotAuthorizedContent or AuthorizingContent on the Router component with server-side Blazor (though it does work with client-side Blazor). This will be fixed in the Preview 7 release.

If you need to check authorization rules as part of procedural logic, you can receive a cascaded parameter of type Task<AuthenticationState>. This can be used to obtain the user's ClaimsPrincipal, which in turn can be combined with other services such as IAuthorizationService to evaluate policies.

A reminder about authorization in client-side Blazor

So, you must always remember to perform authorization checks on your server within any API endpoints accessed by your client-side application.