The source of our data is NYC's Open Data: https://data.cityofnewyork.us/Social-Services/Rat-Sightings/3q43-55fe

We can import it more easily via CartoDB's cached infrastructure:

The internet is full of people who have had the same problems as you! Use their experince to solve your problems!

If I want some date to string functions, I search:

If you don't have your own PostgreSQL instance set up, SQLFiddle is a great place to try out queries. You can even share them with other people. http://sqlfiddle.com/

First, let's see how many rat sightings were reported:

We see that there are 70,576 complaints about rats (or we assume they're all complaints).

count(*) gives a count of the number of rows. If we want to find out how many rat sightings have a valid position (i.e., the_geom is not null), then we can do count(the_geom), like this:

(Here we are giving each column an alias using As new_name after we define the operation. Also notice that we can liberally use whitespace to reformat for readability.)

Now that we know the number of sightings (~70k), how many is that per year?

We can use the aggregate functions max and min on the date columns to find out!

So we see that this dataset covers 2010 through 2015 sightings -- six complete years but is strangely tied to beginning and end of the year. Upon closer investigation, we have dates in 2016.

But notice that created_date is a string! Postgres supports some fancy operations on date types, so we should probably convert to the timestamp format. CartoDB has an easy type converter built-in, but if you want to be careful over how it's converted, you may want to use a PostgreSQL function like to_timestamp like this:

That's the safe way to do it because you don't alter the original column. If you want to live on the edge and alter the column type in place, you can run this:

Now we have the real max min from our data set, not the dates alphabetically.

We can also use these max/min values to find the number of days in the range:

Finding which borough has the largest number of rat sightings

All of the aggregate functions used so far have acted on the entire table... What if we want to look at aggregates over groups, such as which borough the sighting was in? We use the SQL clause GROUP BY!

Notice after the SELECT that we need to either include the column(s) which appear in the GROUP BY, or use an aggregate function over the other column(s). For example, this would fail because community_board isn't in an aggregate or the GROUP BY:

If you wanted to aggregate over a string as well, you could do string_agg.

BUT, if you want groups within groups, you can specify multiple columns in the GROUP BY. This gives you counts

Working with dates and time

Dates can be tricky to work with but thankfully PostgreSQL has a number of functions that can help us out. The two most useful of which are date_part and date_trunc.

date_part allows you to grab part of the date. For example, the year, the month, the day of the week, etc. Let's say we wanted to know how many rats where sighted on Mondays (day number 1 in PostgreSQL -- the number of days starts at Sunday):

Or let's say you wanted to know how many rat sightings for each hour of the day there where you could use date_part('hour', created_date_timestamp)

Finally, we can use date_trunc to truncate a date to a given precision. So for example let's say we wanted to create counts for rat sightings by hour each day, we could do:

For a full list of functions that can be used with dates and times check out the documentation.

Just like dates SQL has a number of functions for matching and working with strings. The simplest of which is to concatenate strings. Lets say we wanted to create a full address from the table, we currenlty have it spread out over the incident_address, borough and city fields. Lets smoosh these in to one field with the parts of the address joined by the character '/' using the || operator in PostgreSQL

We can use WHERE to match on strings like we have already seen but we dont have to match to the exact string. Lets try and get all of the sightings in places where famalies live. In the Location_type column we have entries like "1-2 Family Dwelling" or "3+ Family Apt. Building". To get all of them we could make a list of strings that indicate a family lives there or we can simple us the like operator

The LIKE command allows you to write a string with wildcards. A _ matches any one character and % matches any number of characters, so '%Family%' matches any string with 'Family' in it at any point. This is really powerful to get more info on pattern matching check out the docs.

Finally lets aggregate by the number of people dwelling in the buiilding. This is contained at the start of the string '1-2 Family Dwelling' so how do we get at it? Well we can split strings using the split_part function

Split part takes a string to split on, what to split it with ' ' and which part of the split to return. Finally lets aggregate

For more info on string functions in PostgreSQL cehck out the documentation.

Visualize the number of rat complaints in each borough

Let's use our GROUP BYs to look at how boroughs compare. Let's do the normal group by, but this time find the center of the complaints in each borough (a kind of center of mass of complaints).

Some of the magic happening here is in the PostGIS function ST_Centroid, which calculates the 'center of mass' of the geometry into a latitude/longitude point. The aggregate function that allows us to use the_geom is ST_Collect().

We can visualize this in CartoDB by making a 'bubble map' that sizes the marker by an attribute, such as the number of sightings. But we can do more.

Now that we have some summary information about rats and boroughs, let's go farther!

What about breaking them out by borough and year? This way we can see trends in complaint data.

One thing we need ahead of time is the center of all the boroughs that we used in the last query. Since this will change year by year, we should use one for all years so they are neatly stacked.

Now we can make a category map off of the year column, and then do a rough proportional symbol map off of the number of complaints. Here's a good styling for that (with help from our colleague Mamata):

If you want to make way better proportional symbol maps, check out this blogpost by our colleague Mamata Akella. 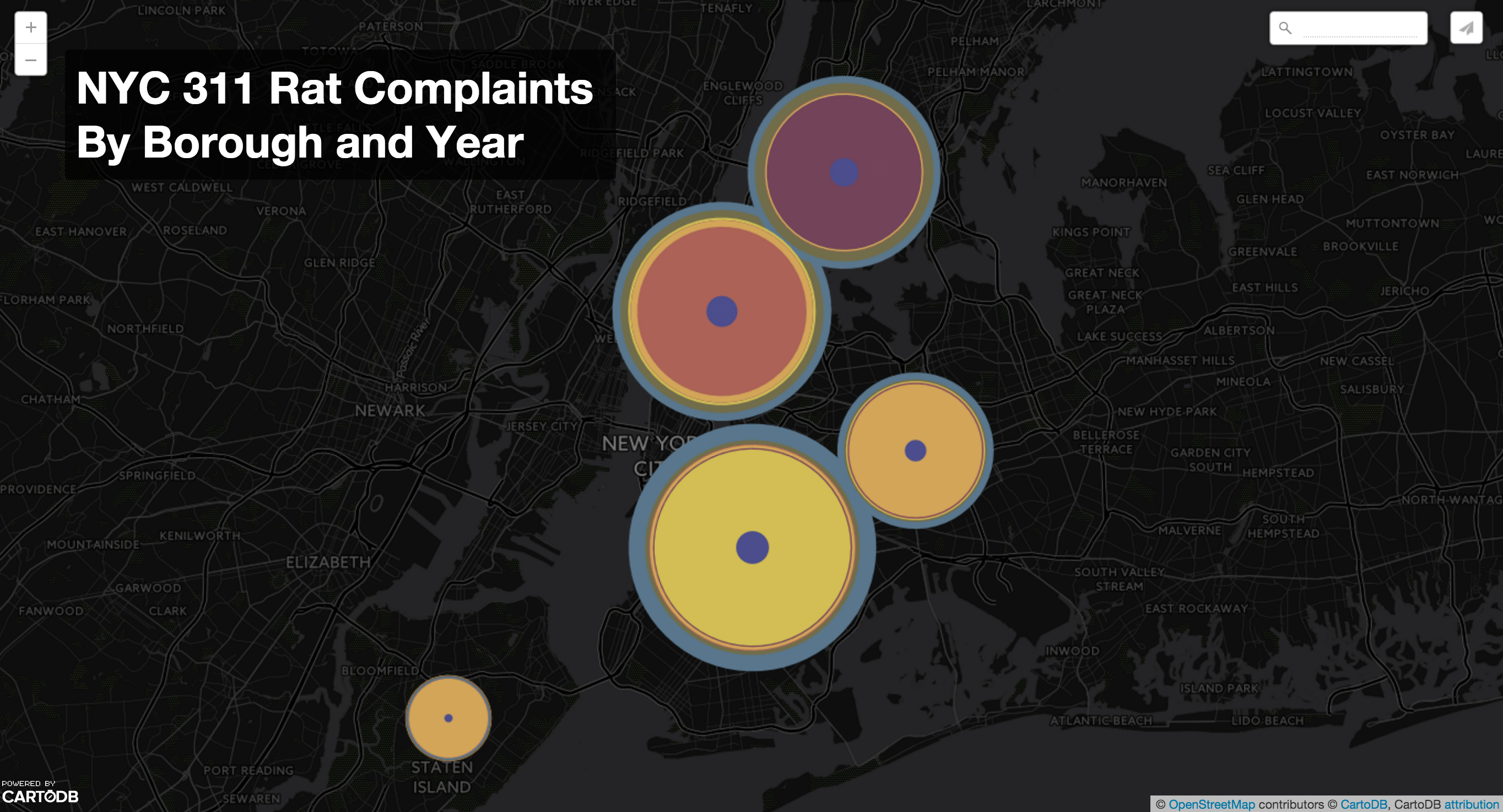 Check out the final map.