What Is A StatefulSet

A Zookeeper service is a distributed coordination system for distributed applications. It allows you to read, write data, and observe data updates. Data is stored and replicated in each ZooKeeper server and these servers work together as a ZooKeeper Ensemble. 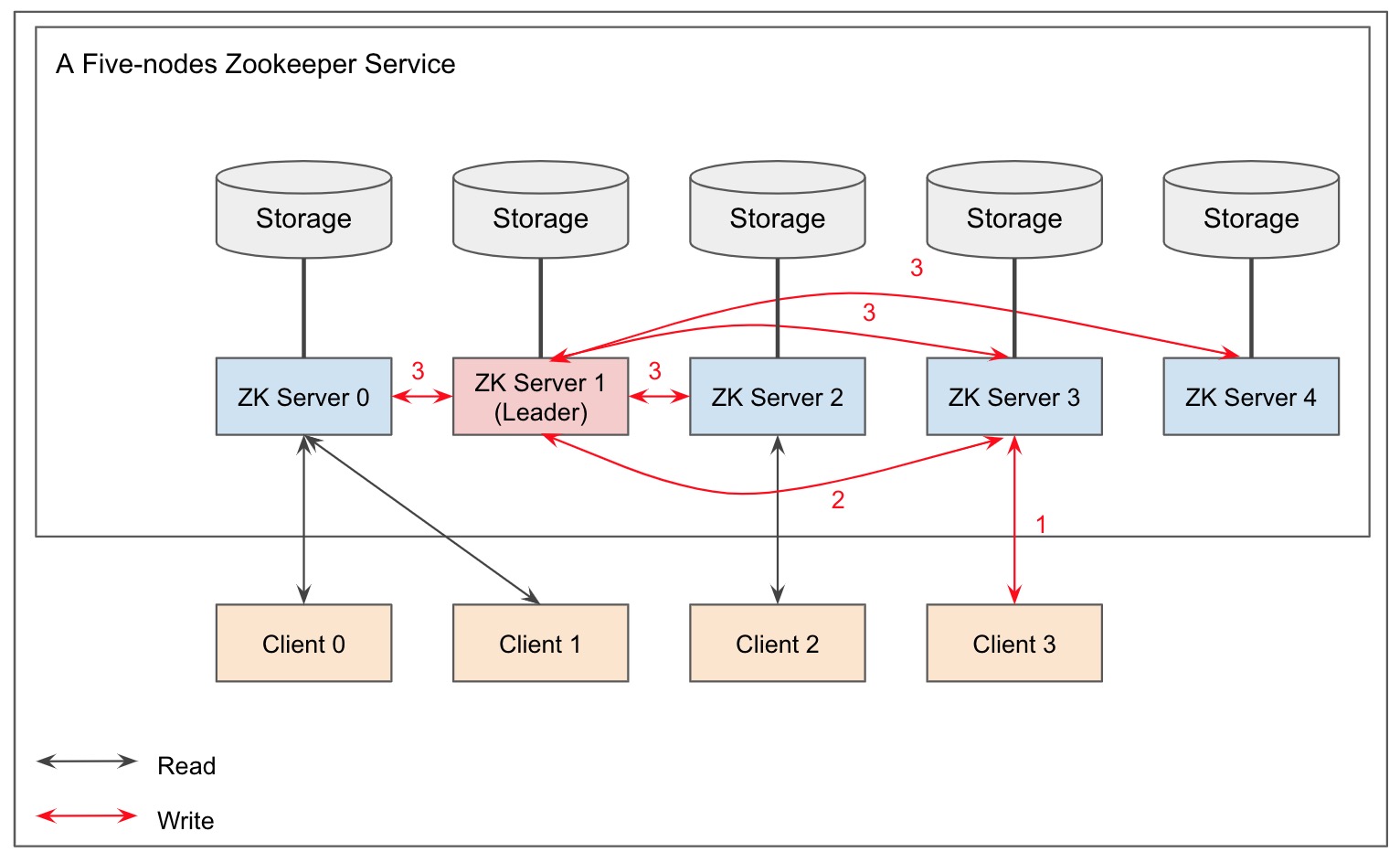 A Headless Service is responsible for controlling the network domain for a StatefulSet. The way to create a headless service is to specify clusterIP == None.

Unlike a ClusterIP Service or a LoadBalancer Service, a Headless Service does not provide load-balancing. Based on my experience, any request to zk-hs.default.svc.cluster.local is always redirected to the first StatefulSet Pod (zk-0 in the example). Therefore, A Kubernetes Service that provides load balancing or an Ingress is required if you need to load-balance traffic for your StatefulSet.

The following spec demonstrates how to use a StatefulSet to run a ZooKeeper service:

Like a Deployment, a StatefulSet uses the field spec.selctor to find which Pods to manage. You can check this doc for details about the usage of Pod Selector.

The field spec.replica specifies the desired number of Pods for the StatefulSet. It is recommended to run an odd number of Pods for some stateful applications like ZooKeepers, based on the consideration of the efficiency of some operations. For example, a ZooKeeper service marks a data write complete only when more than half of its servers send an acknowledgment back to the leader. Take a six pods ZooKeeper service as an example. The service remains available as long as at least four servers (ceil(6/2 + 1)) are available, which means your service can tolerate the failure of two servers. Nevertheless, it can still tolerate two-servers failure when the server number is lowered down to five. Meanwhile, this also improves write efficiency as now it only needs 3 servers' acknowledgment to complete a write request. Therefore, having the sixth server, in this case, does not give you any additional advantage in terms of write efficiency and server availability.

A StatefulSet Pod is assigned a unique ID (aka. Pod Name) from its Headless Service when it is created. This ID sticks to the Pod during the life cycle of the StatefulSet. The pattern of constructing ID is ${statefulSetName}-${ordinal}. For example, Kubernetes will create five Pods with five unique IDs zk-0, zk-1, zk-2, zk-3 and zk-4 for the above ZooKeeper service.

You can choose whether to create/update/delete a StatefulSet's Pod in order or in parallel by specifying spec.podManagementPolicy == OrderedReady or spec.podManagementPolicy == Parallel. OrderedReady is the default setting and it controls the Pods to be created with the order 0, 1, 2, ..., N and to be deleted with the order N, N-1, ..., 1, 0. In addition, it has to wait for the current Pod to become Ready or terminated prior to terminating or launching the next Pod. Parallel launches or terminates all the Pods simultaneously. It does not rely on the state of the current Pod to lunch or terminate the next Pod.

Doing rolling updates for the stateful applications like ZooKeepers is a little bit tricky: Other Pods need enough time to elect a new leader when the StatefulSet Controller is recreating the leader. Therefore, You should consider configuring readnessProbe and readnessProbe.initialDelaySeconds for the containers inside a StatefulSet Pods to delay the new Pod to be ready, thus delaying the rolling update of the next Pod and giving other running Pods enough time to update the service topology. This should give your stateful applications, for example, a ZooKeeper service, enough time to handle the case where a Pod is lost and back.

Like a Deployment, the ideal scenario of running a StatefulSet is to distribute its Pods to different nodes in different zones and avoid running multiple Pods in the same node. The spec.template.spec.affinity field allows you to specify node affinity and inter-pod affinity (or anti-affinity) for the SatefulSet Pods. You can check this doc for details about using node/pod affinity in Kubernetes

The field spec.volumeClaimTemplates is used to provide stable storage for StatefulSets. As shown in the following picture, the field spec.volumeClaimTemplates creates a Persistent Volume Claim (datadir-zk-0), a Persistent Volume (pv-0000), and a 10 GB standard persistent disk for Pod zk-0. These storage settings have the same life cycle as the StatefulSet, which means the storage for a Stateful Pod is stable and persistent. Any StatefulSet Pod will not lose its data whenever it is terminated and recreated. 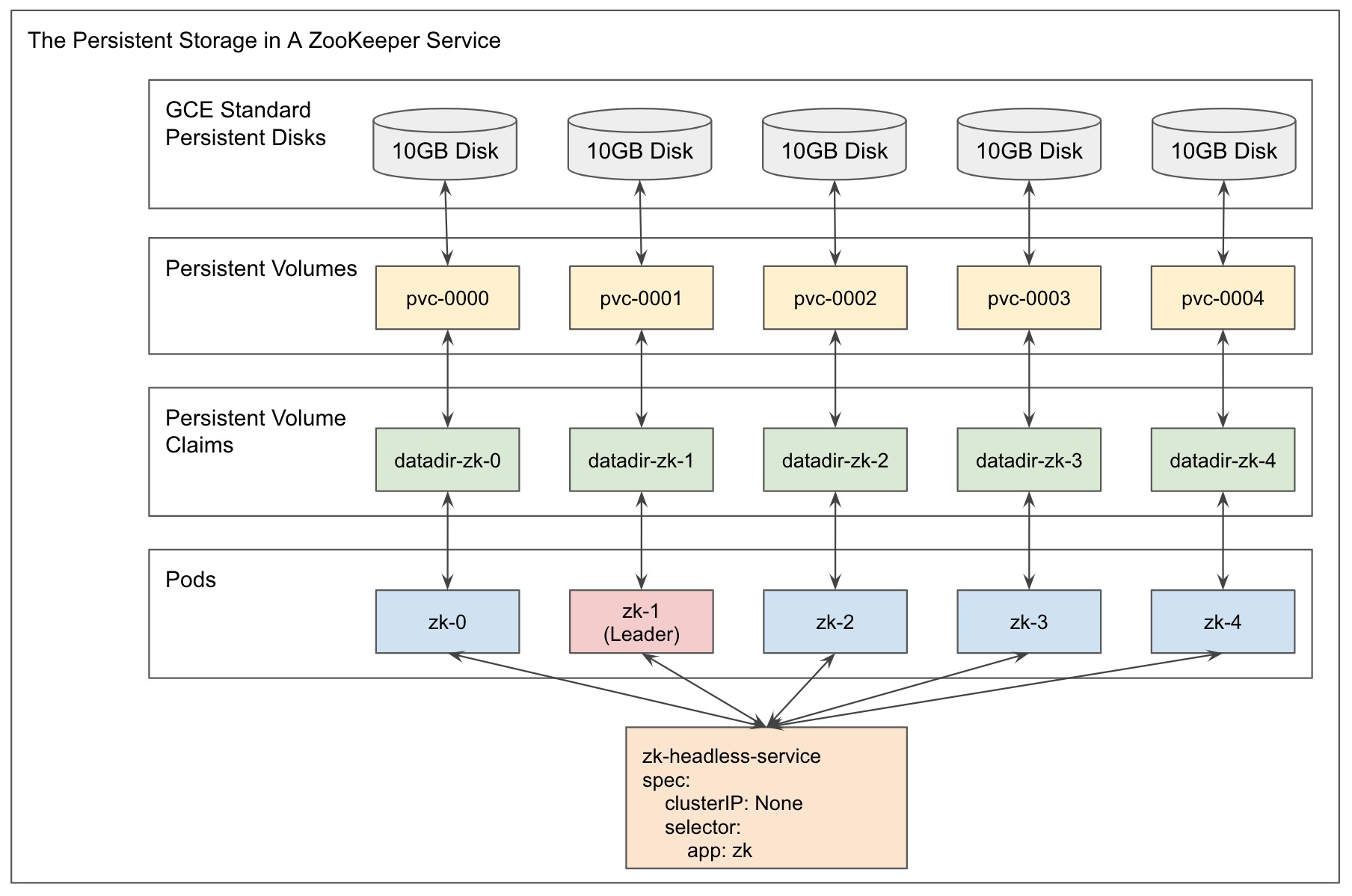 Check this blog if you are curious about how Kubernetes provides load balancing for your applications through Kubernetes Services.