Last active
Star
Download ZIP
Breaking down the features provided by PyTK or TMXL that work just by having those mods installed.
Raw
wip-passive-features.md

PyTK and TMXL both offer various passive features for maps, which require only that the mod providing the feature be installed. A "passive" feature here from TMXL could be used in a map loaded by Content Patcher or SMAPI as long as TMXL is installed, for example, and does not need to be in a TMXL pack specifically.

This allows mappers to do things like add additional layers, change the color of water in a location, or use image layers with parallax effects in their maps, while still using their framework of choice for loading their map.

Additional layers you add with a map editor (such as Tiled) are not normally rendered in game. A new layer property is enough to make it appear as long as PyTK is installed, without additional side effects if PyTK is absent.

Here's an example that will be drawn between the Back and Buildings layer. (Remember that this is not because of the position of the layer in the list on the right, which is just for viewing how it will look in-game. The property is what determines the order.)

If you only want your new layer drawn sometimes and not all the time, you can tell PyTK to only render it once certain requirements are met. It just takes one more new property called DrawConditions. It accepts all event preconditions, and can also use Lua conditions if needed. Here's an example of a layer that's drawn underneath the Back layer, but only if you've married Abigail. See conditions for a more detailed breakdown of possible conditions in PyTK-based mods. (aka TODO)

The game's animated water tiles are partly made up of the sprites on your tilesheet, and partly from the wavy overlay that gets rendered over it. This overlay is only rendered in non-desert areas flagged as Outdoors, in the Sewers, and in the Submarine. This property will try to force the game to render water as if it were outside.

Mappers are not normally able to change the tint of water tiles without editing a water overlay in LooseSprites. Even then, the way they are mixed may give a result you didn't intend and lead to some trial and error. @WaterColor is a map property that lets you change the color of all water tiles for a specific map.

Layers and tiles can be tinted, too. Add a new layer or tile property called @Color of the color type, then use the color picker to choose how you want it tinted. (todo add screenshots)

Background Color is a standard map property in Tiled that can be read by PyTK. It changes the color you see past map boundaries or under transparent/missing tiles.

PyTK allows you to use higher resolution textures for things that would otherwise need to be a fixed size, just by adding a json file next to the png you want to use. If your png is called mytilesheet.png, then your json file should be named mytilesheet.pytk.json. An example:

Here's a sample-pack that uses Content Patcher to edit the trees in spring_outdoorsTileSheet to replace them with higher resolution ones provided. It only uses Scale inside the json, because it's not animated.
(TODO: replace sample pack with one specifically for that)

Ever wanted to make an NPC garden that actually grew crops? Crop layers can even be harvestable. 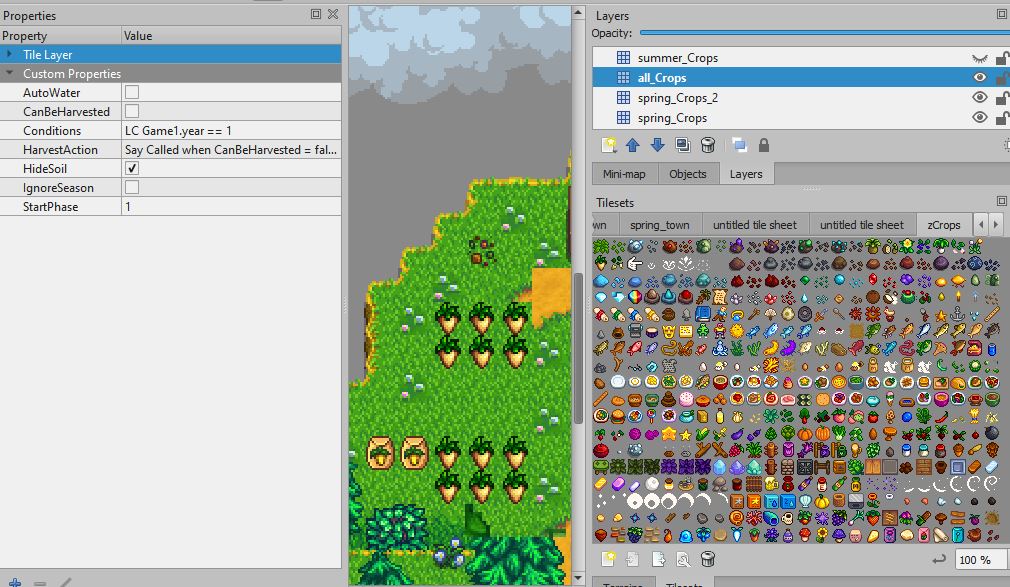 Can I grow JSON Assets crops? Yes! Paint any tiles down where you want your JA crop to grow, and then add a tile property of Name and set it to the exact name of the JA crop.

TMXL adds several new tile actions you can use in your maps. Unless otherwise specified, they also work as TouchActions.

Warp the player to a map at the specified coordinates. NPCs will not use this for pathing. Usage Action|LoadMap Name X Y

Usage:
Action|Lock 5 388 [persist] [recall]
Default|Say Default (show text 'default' when no object is in hand)
Failure|Say Failure (show text 'failure' when either the active object is not the correct item, or there is not enough of it)
Success|Say Success (show text 'success' when you're holding at least the required amount of the right item, and remove that number - in this case 5 pieces of wood)
recall|Say recall (optional - show text 'recall' every time you click on it after the initial success. persists through game reload)
(Note that Say is used here just as an example - you can trigger any tile action at any stage, including custom ones.)

SwitchLayers Layer1:Layer2:14:17 Switches only the specified Tile between layers x:y

Tiled will not allow you to save your map as a tbin if you use the color property. If for some reason you can't use the more fully featured tmx format, you can instead add this property as a string, then write your color in hex using either #RGB or #ARGB format. (Example: #86000 or #C786000 for a red color.)