Moving to Cypress (at least for the E2E tests), it now looks like:

At first glance, and based on my experience, the stack is a lot less "batteries included", which is what I like about Rails. I'm continuing to try new things out. This article will

I like each blog post to be independant, and include all the steps to recreate it. If you don't care about setting up the Rails app with RSpec etc, just grab the repo here and move to the second half.

Note: If you want to skip to the section where I add Cypress, ctrl+f "Installing and Setting Up Cypress".

Add FactoryBot and RSpec and webpacker.

Then run bundle install, and generate the binstub and system folder by running:

Initalize the database with rails db:create. That should have set up RSpec, FactoryBot and installed the dependencies for system tests.

We will make a simple blog app, that lets an anonymous user create a post, which has a title, body and category. We need a Post and Category model - create them with the following:

Update models/category.rb to reflect the has_many relationship (a category can have many posts):

Add some code to app/controllers/posts_controller.rb:

Create some views with

Create a test with touch spec/system/posts_spec.rb, and add:

Before moving on to using Cypress, let's make sure the code is working correctly using the built in system tests, which run using selenium_chrome_headless. Update spec/system/posts_spec.rb:

Now we need the views. Start with app/views/posts/_form.html.erb:

We included a flash message validating the minimum length of a post - we will add this validation in a moment. First, update app/views/posts/new.html.erb:

Now running rspec spec/system should give us a passing test. Let's implement two more tests, starting with validating the length of a post title. Update app/models/post.rb.

This should pass, too.

Finally, add the following to app/views/posts/index.html.erb:

This shows a list of posts at /posts. Lastly, a test in spec/system/posts_spec.rb:

Installing and Setting Up Cypress

Now we have a boring, yet working and well tested Rails app. Let's proceed to add Cypress and migrate our test suite. Firstly, install Cypress and a few dependecies with:

Next, following their documentation, add a command to package.json. Mine package.json looks like this: 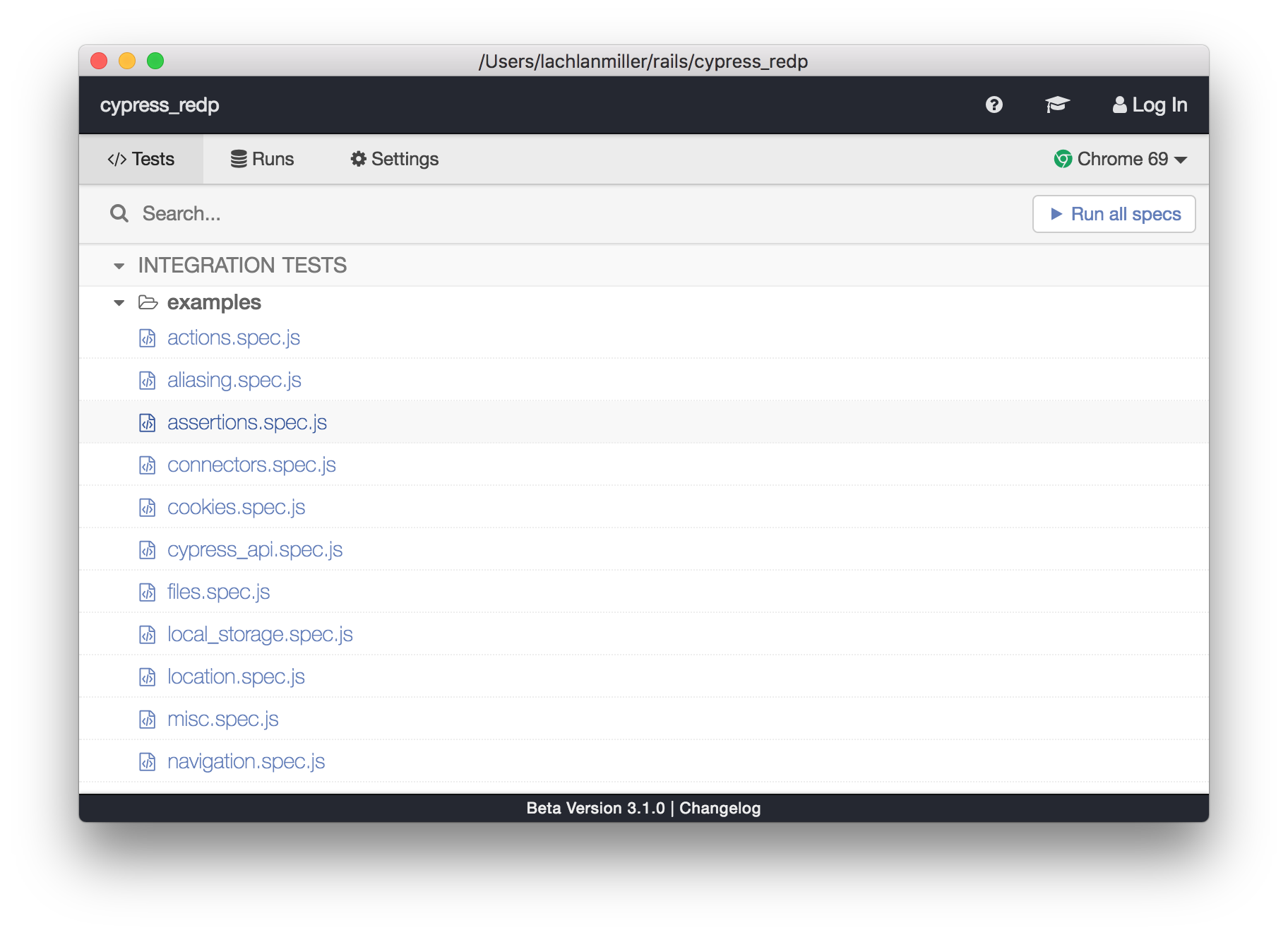 Furthermore, a cypress folder was created for you.

Let's migrate the first test - creating a post succesfully - to Cypress. First, start the rails server by running rails server in a separate terminal from Cypress. Next, create the test with touch cypress/integration/posts.spec.js, and add the following:

The Cypress DSL is fairly easy to read. Strictly speaking, {force: true} should not be necessary. Some of my tests were randomly failing without this, though, so I added it. I'll investigate this in more detail later.

If you still have the Cypress UI open, search for the test using the search box: 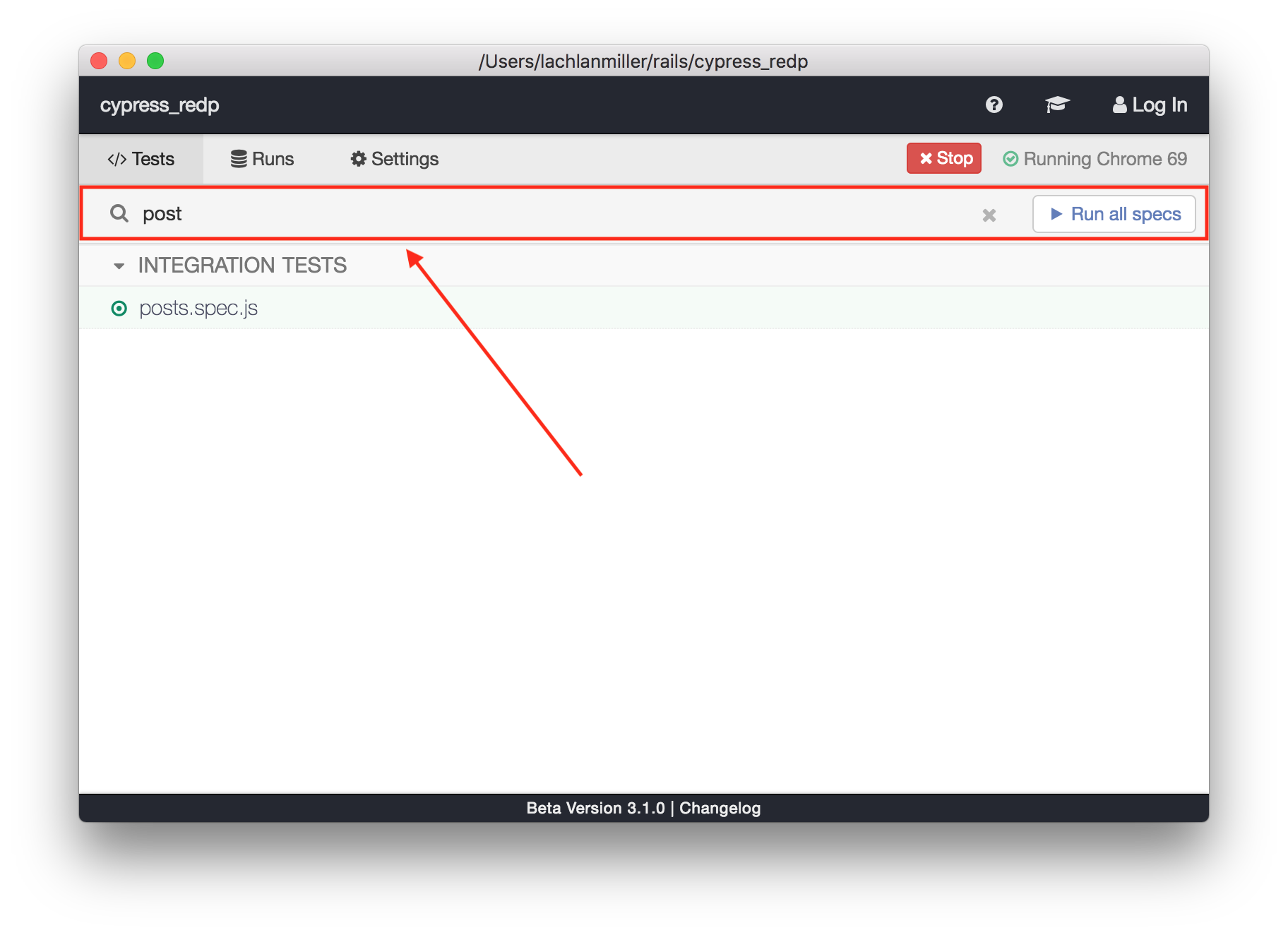 This fails, of course: 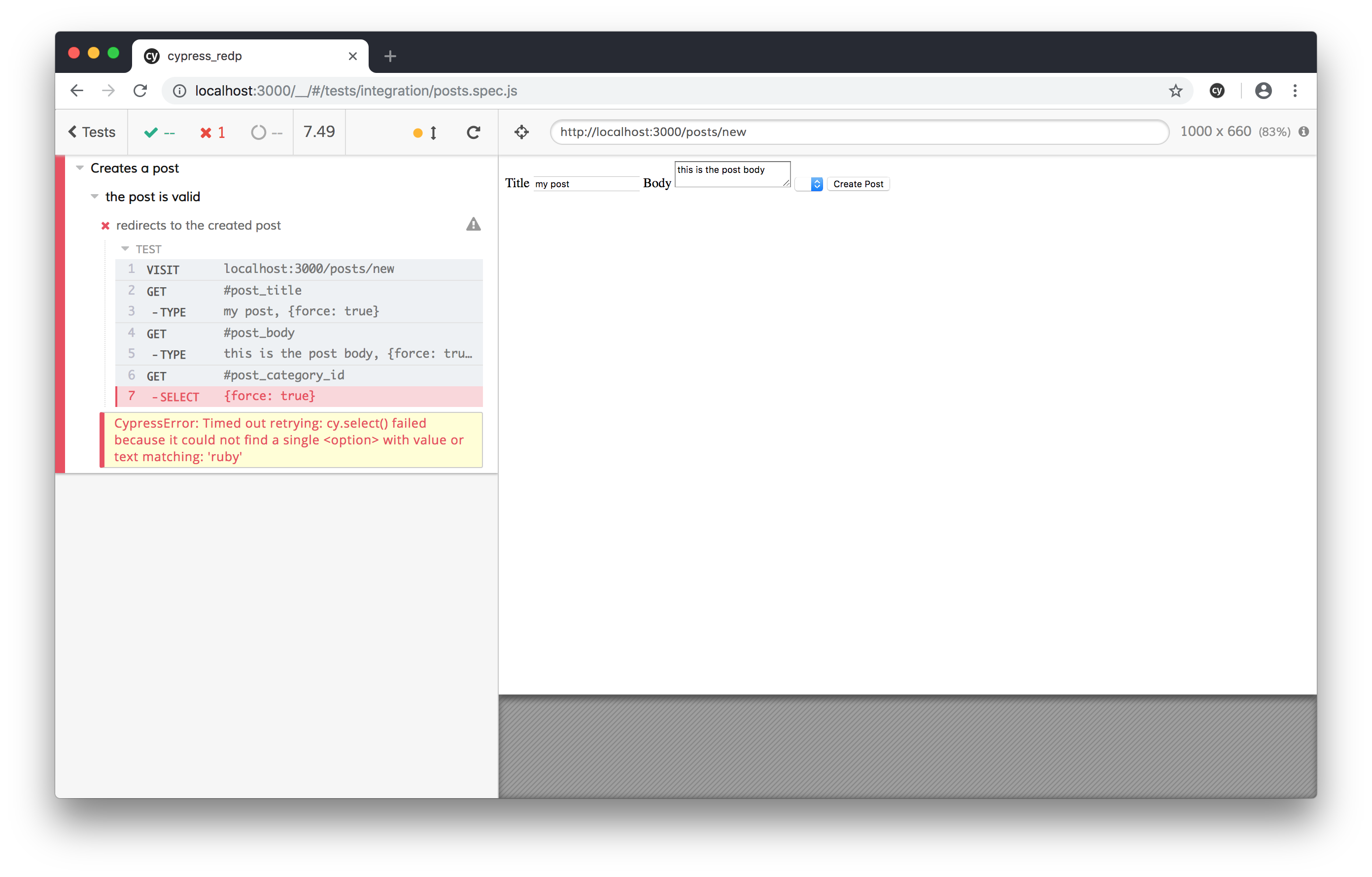 Because no categories exist. Before implementing a nice work around, just create one by dropping down into rails console and running Category.create!(name: 'ruby'). Now the test passes! 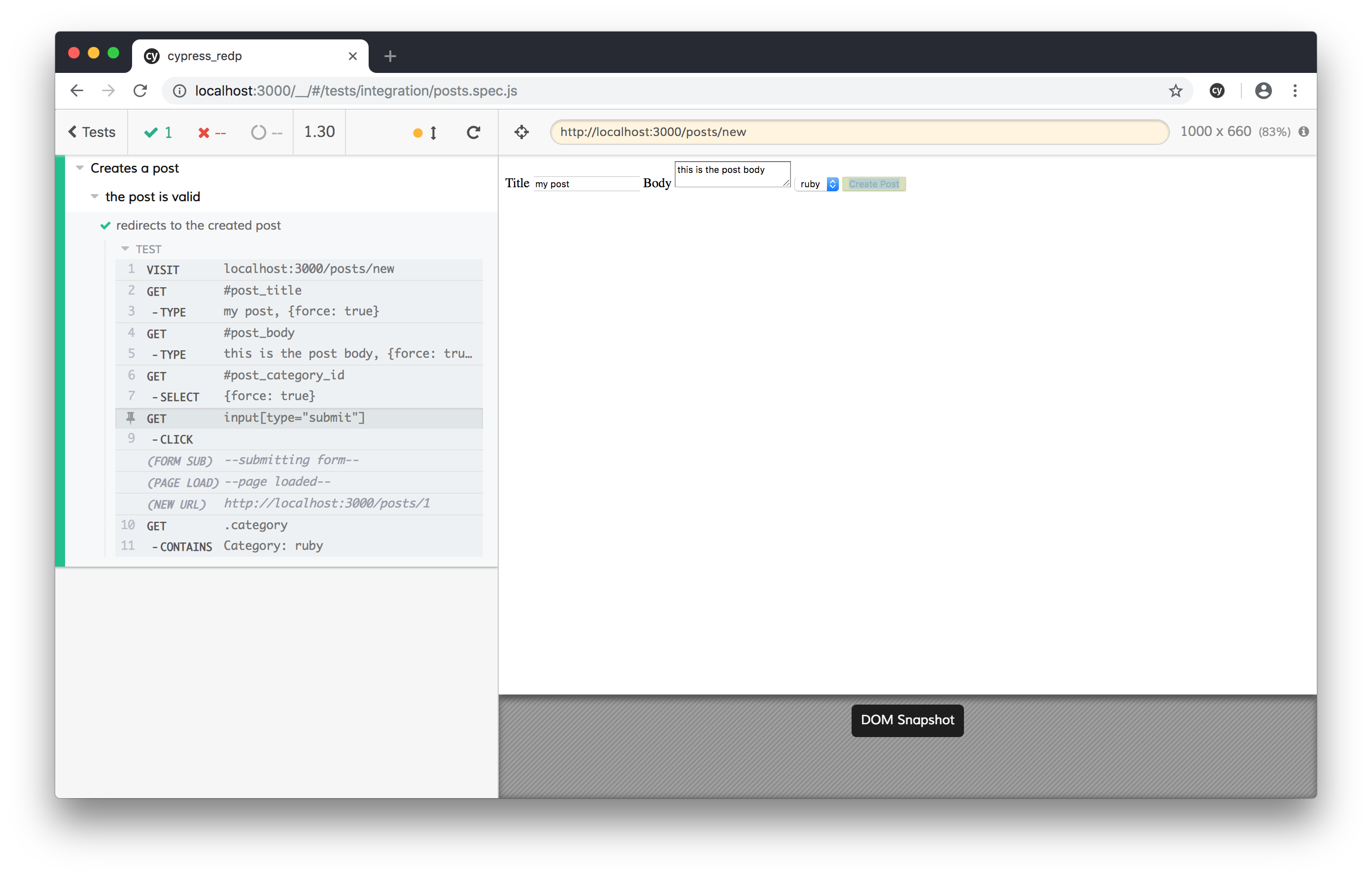 There are some problems:

Let's get to work on the first two.

Let's set up some basic seed data for the tests to use. First, create a seeds folder containing a test.rb file by running mkdir db/seeds && touch db/seeds/test.rb. Inside, add:

This will seed the correct seed file based on the current RAILS_ENV.

Cleaning the Database between Tests

Now we have a way to seed data, but no way to clean the database after each test. The way I've been handling this is by making a POST request to dedicated /test//clean_database endpoint before each test, as recommended by Cypress. Let's make that API. First, update config/routes.rb:

Starting with databases_controller_spec.rb, add the following:

There are two functions this API provides. Both specs test for truncation. We also allow a should_seed parameter to be provided. If should_seed is true, then we repopulate the database using the data defined in db/seeds/test.rb.

The controller implementation is as follows:

This should yield two passing specs. Now, restart the Rails server with RAILS_ENV=test rails server. Now, we need a way to actually access the API from within Cypress. Inside of cypress/support/commands.js, add the following:

Cypress automatically loads all the helpers in commands.js for us.

Since Rails is running on port 3000, and Cypress is assigned an arbitrary port, we need to support CORS for the /test routes. Inside config/environments/test.rb, add the following:

This allows CORS for the test environment only. Restart the Rails server, and reopen the Cypress UI if you closed it. It should pass... alas, it does not.

If you look closely, only on the initial opening of the Cypress UI, the browser kind of "flickers" once. For some reason, this causes the beforeEach hook to be called twice, messing up the seed data. The post request contains the category id of the first seed run, however since the browser flickers and causes the data to be reseeded, the initial category id used in the test no longer exists!

Once you have the UI running, however, simply rerunning the test should be enough to pass. Typically I only open the UI once, and leave it open, so it is not a big deal locally. On CI, this is a huge problem though. I'm going to get in contact with the Cypress team and see if they have a work around.

This endpoint will simply seed a specified number posts. Now, the implementation in seeds_controller.rb:

This test should pass. Here are two more tests - one for the case where a post title is too short, and an error is displayed, and another for the /posts index page. This once will make use of the new /seed_posts route, so update commands.js: 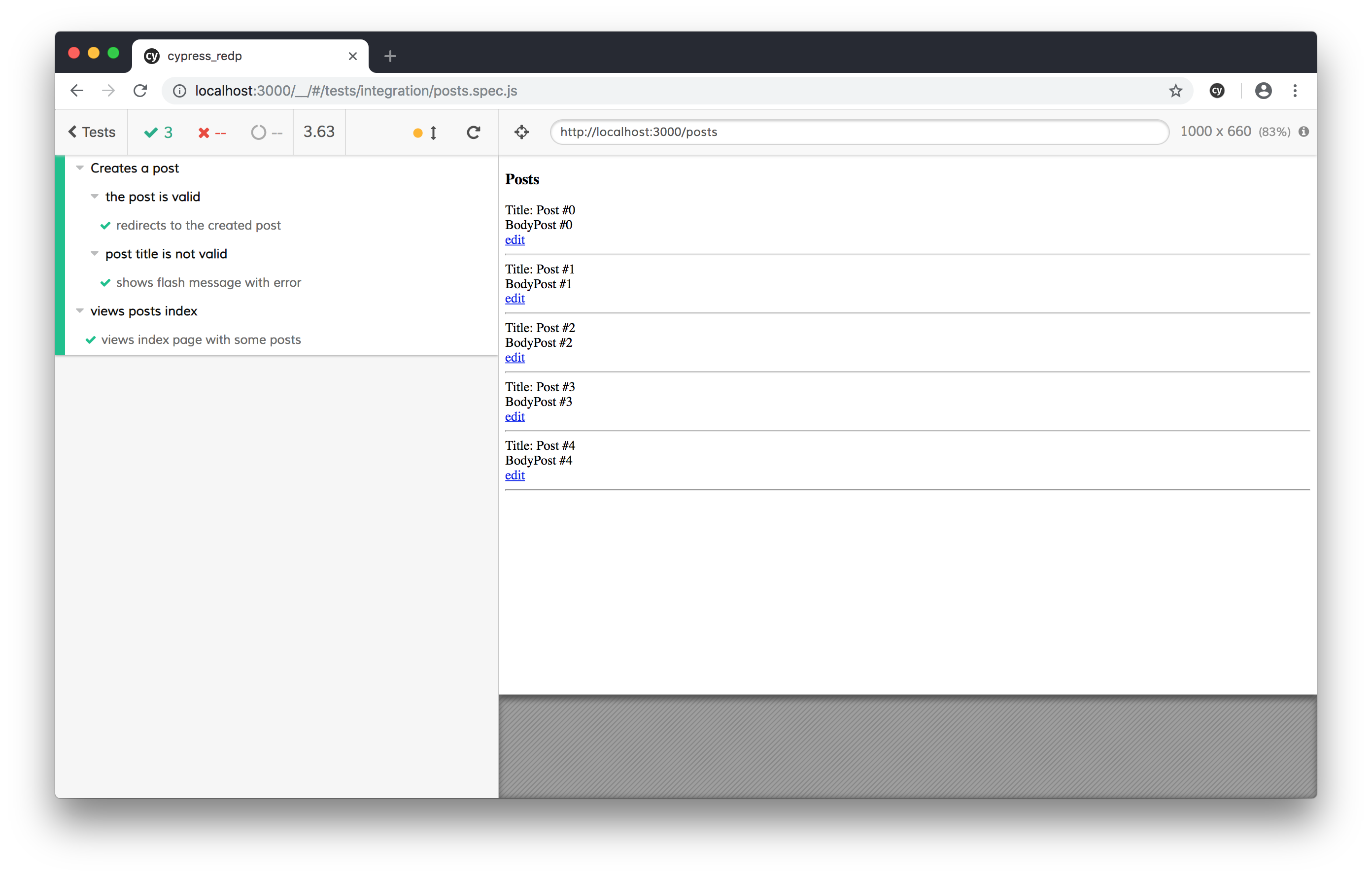 This was a very long article. We covered:

Cypress is certainly a great tool, and a refreshing new angle on E2E testing. The lack of support for non Chromium based browsers, and of information on how to integrate it with various backends led to some challenges. However, I'm positive Cypress is going in a good direction and will continue to refine my workflow and integration with Rails.