For that reason, I wanted to use Docker so that all of my deployments would be automated and reproducable. In addition, Docker would allow me to have reproducable builds for my releases. I could build my releases on any machine that I wanted in a container which would target the same architecture as the one I used to run my release when I deployed it. For instance, I could build my releases on my MacBook using an Alpine-based Docker container, and then deploy those to my VPS in a different Alpine-based container. This would save me a lot of headache with trying to compile for the correct architecture for my VPS.

In addition, using Docker would allow me to recompile and swap out my app's server without having to mess with the database at all as long as I don't change my models. Since I run apps which need a lot of time to seed the database, this would provide me a lot of granular control about when I need to do that and when I don't.

Finally, this setup would allow me to run an NGINX container to proxy all of my server's traffic to the appropriate app container, since I often run multiple apps on my server.

Overall, the biggest motivation that made me want to create this guide was to setup a VPS in which I have zero dependencies besides Docker, and I wanted to have a reproducable guide for doing that which was compatable with both Phoenix 1.2 and 1.3, since I have apps running both of those versions of Phoenix.

This guide is written for Phoenix 1.2. However, all necesary changes to work with Phoenix 1.3 will be marked explicitly with "Phoenix 1.3: ...".

For generating releases, we will be using Distillery, which allows us to package a release of our application into a single tarball.

2. Running Migrations and Seeding the Database

In order to be able to run migrations and seed the database from the release generated by Distillery, we will need to make a few modifications as generally outlined by the Running Migrations guide. This section assumes that you have database seeding operations defined in the normal location under priv/repo/. If you don't have these, your database will just be migrated and no seeding will be done. Otherwise, you can strip down the release_tasks.ex file as shown below.

Now you will be able to run migrations from the release with bin/myapp migrate.

Phoenix 1.3: the file needs to be modified slightly for the new location of node_modules.

Phoenix 1.3: the file should be modified slightly to accomidate the new assets directory, and the new phx.digest command.

Now, you can run the script with ./build.sh and it will build and run the Docker container which will build the release in _build/prod/rel/myapp.

Next, we need a Dockerfile to run the generated release that Distillery has built for us. In the root directory of your application, create a file called Dockerfile.run. In this file, we have not specified a default command via a CMD instruction for the container. This is because we will set this in the docker-compose.yml file later so that we can change the command there if needed.

Now, you have a container which includes Erlang to run your release in. You could now run the container as follows:

However, this would be quite pointless at this stage because we haven't set up a database for the app to connect to, so if you did this you would just see a bunch of connection refused messages from the app.

Next, we will create a Docker Compose file for our app. This file helps us provision and manage multiple containers so that we don't have to manually start each individual container with many parameters. To do this, create a docker-compose.yml file in the root directory of the app.

Now your app can be started with a single docker-compose up command. This will start a database container, then a temporary container which seeds and migrates the database with ./myapp migrate, and finally the actual Phoenix server container. However, it still won't be able to connect to the database as we haven't configured it yet. Also, it relies on an external Docker network to have already been created.

The following diagram depics the process of running the application with Docker Compose: 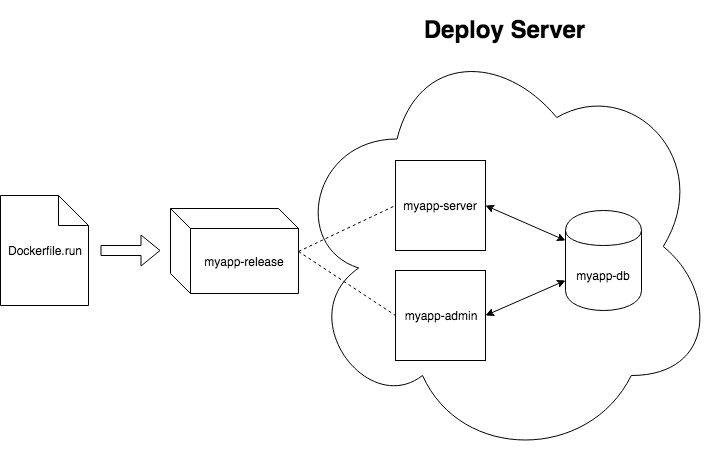 In order to run our releases inside the Docker environment, we need to change a few Elixir config files. This section is loosely based on the Using Distillery With Phoenix.

Phoenix 1.3:, you only have to change the url: line as the http: line is no longer relevant. You should have a line reading load_from_system_env: true, instead.

We will setup a Docker network called nginx-network. Normally, each Docker container started individually joins its own network. When you specify a docker-compose.yml file and start multiple containers with docker-compose up with no netowk specified in the file, your containers will all join a default network created by Docker Compose. When all of your containers are connected to the same network, they are all reachable by their hostnames which are set as their container names. This is what we want.

This config file proxies any traffic coming in from the myapp.com domain to the hostname myapp-server on port 5000, which is the HOST and the PORT that we specified in the environment configuration in our app's docker-compose.yml.

9. Tying it All Together

Now, you should be able to access your application on the domain that you specified.

If you want to extend your configuration for multiple applications and domains, it's very easy!

That's it! Your NGINX container will now proxy traffic appropriately for both of your apps. 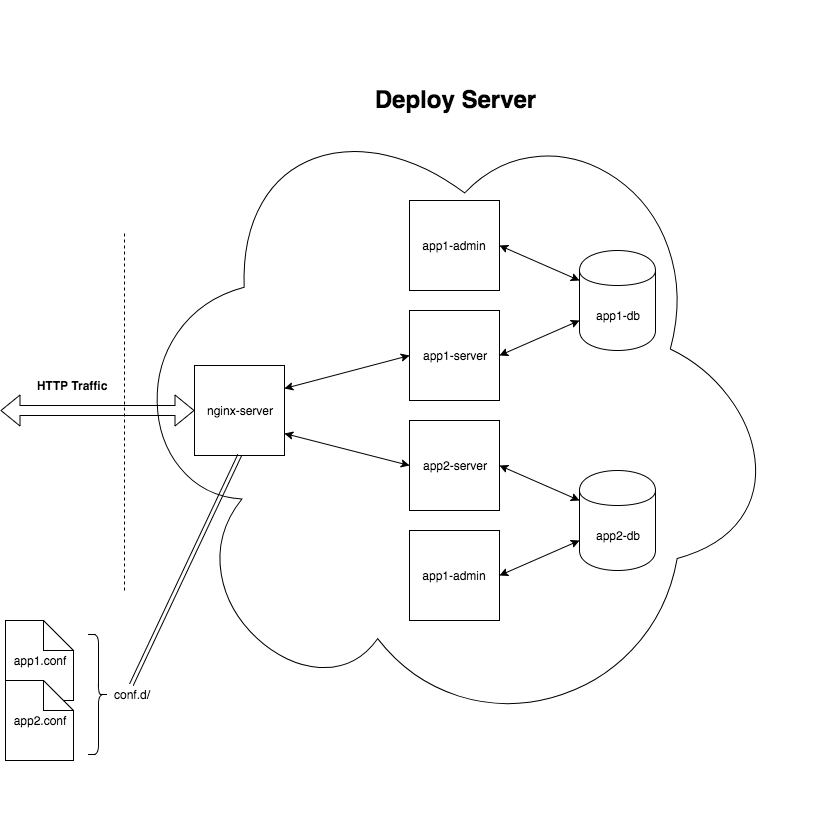 A huge advantage of this deployment strategy is the fact that compiling the releases is completely decoupled from deploying them. That means that you can compile your Distillery release anywhere you want, even on your development machine. It will be compiled for the correct architecture using Docker. Both the release builder image and the deployment (runner) image are based on Alpine.

To compile your release on a different machine than your deployment machine, do the following:

Note: on your deployment machine, you really only need the following files to deploy the app:

Then, you can run your releases without having to have the rest of the app's directory structure and code on your deployment machine.