Last active
Star
Download ZIP
On the cost of being lazy
Raw
lazy_performance.md

On the cost of being lazy

Previously I have looked at performance of different persistent hash maps and data pipelines in .NET. Now I wonder:

What is the cost of being lazy?

In F# we can define a lazy value like this:

What is the CPU cost of this delayed computation and how does lazy compare with alternatives?

To test it I have created a simple algorithm that allows me to control the ratio of how often the lazy value will be be recreated so that we can see how the relative cost of being lazy depends on the ratio. The delayed computation is very cheap (returns an integer) as we like to measure the cost of being lazy.

These are the alternatives I selected: 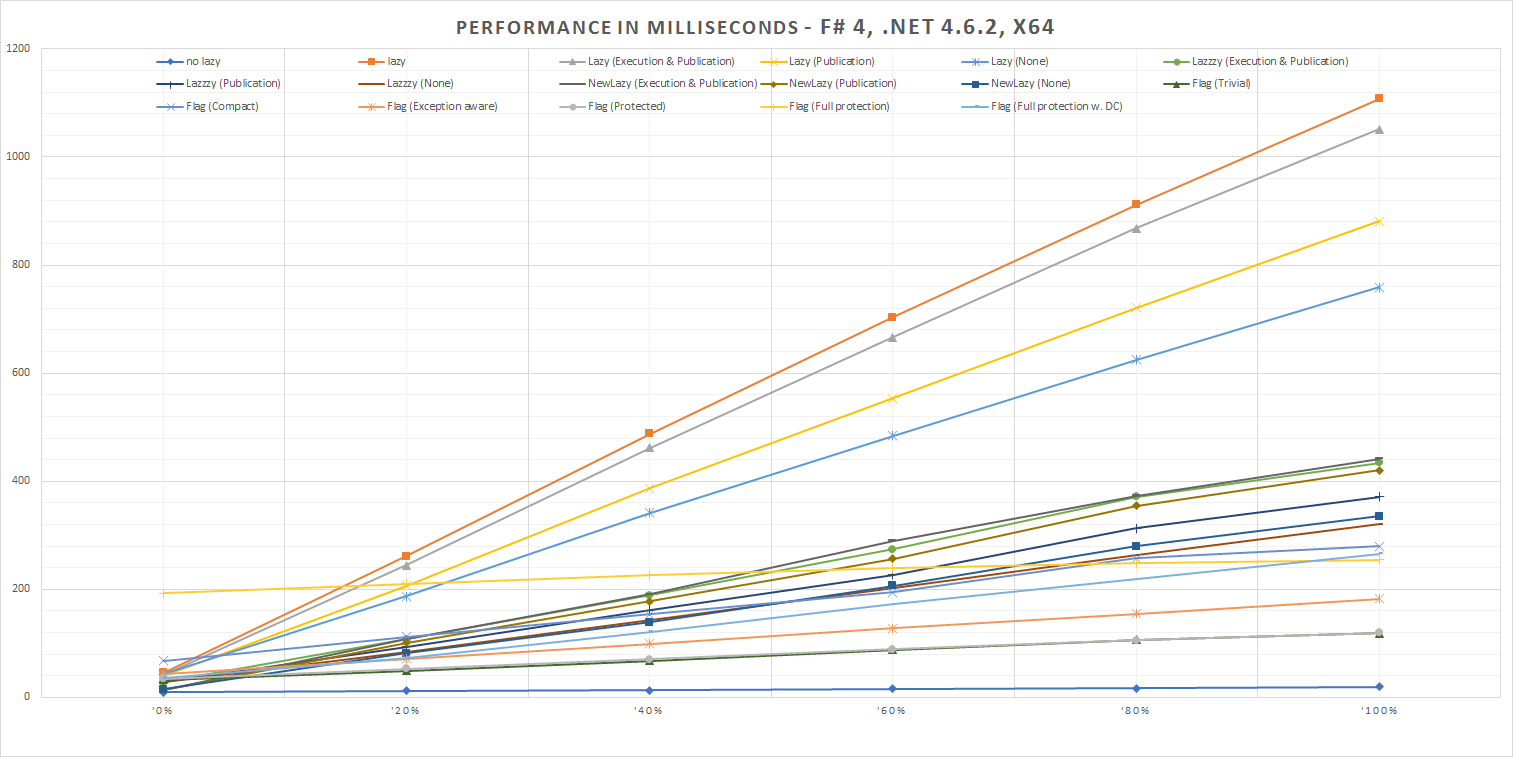 As expected no lazy is the fastest overall (because the computation is very cheap).

For all lazy implementations except Flag (Full protection) the overhead seems to be roughly linear to the ratio.

At 100% we see that lazy incurs a 50x performance overhead. It is also somewhat surprising that lazy does worse than Lazy (Execution & Publication) as F# uses the same implementation but it turns out that FSharp.Core allocates an extra function object when we use lazy.

Because of the forgiving memory model of i86 it turns out that the cost of Flag (Trivial) and Flag (Protected) is almost identical. This might not be true on ARM or PowerPC.

Paul Westcott (@manofstick) Lazzzy implementation does significantly better than the Lazy<'T> and according to Paul Lazzzy should replicate the full functionality of Lazy<'T> which my simpler flag based schemes don't.

In all these cases we have no contention of the locks so the performance will look different in a concurrent environment with heavy contention. What is the cost of locks under contention? That is a topic for another blog post. 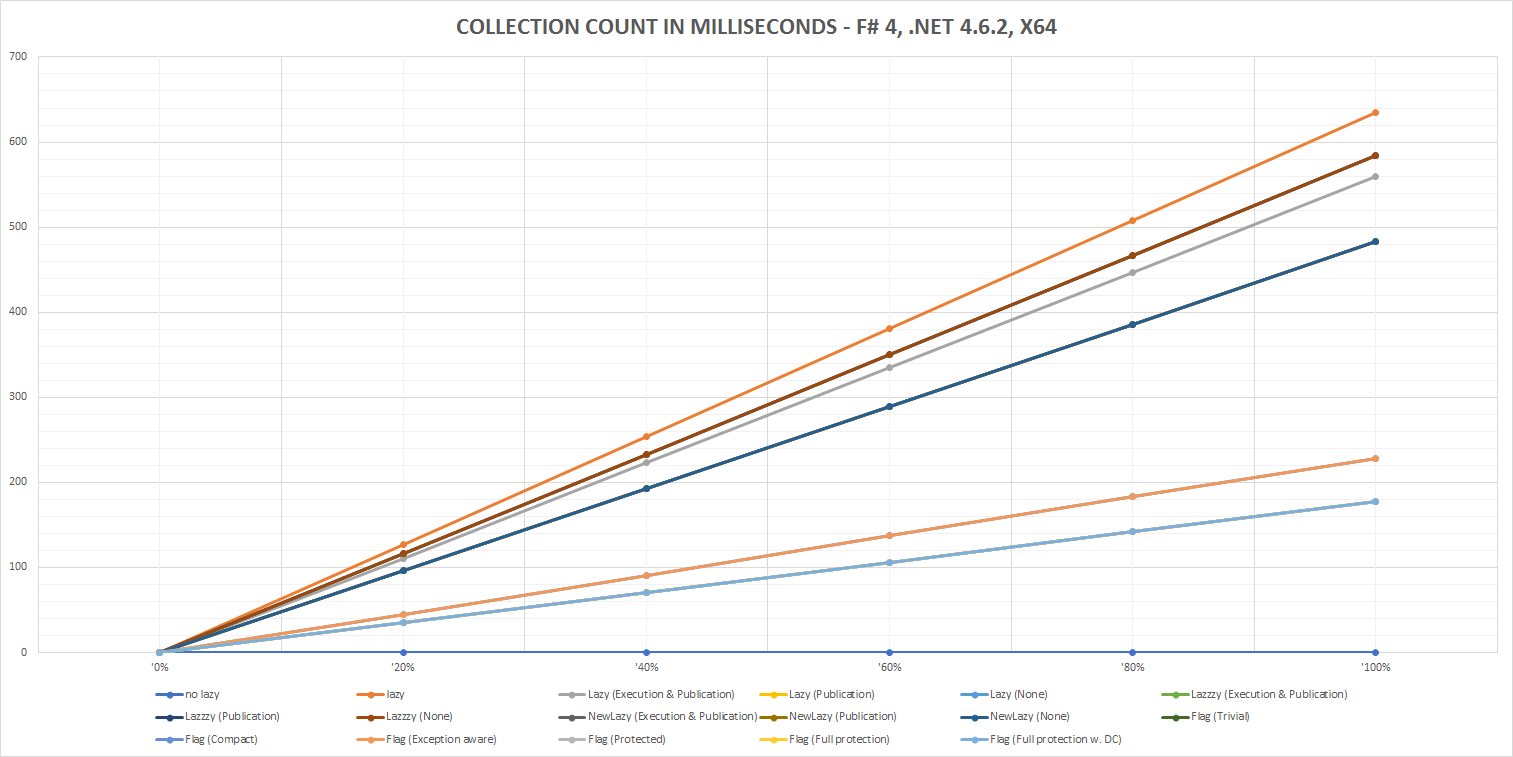 Collection count gives an indication on the number of objects allocated by the lazy implementations. Lower is better.

For all lazy implementations the overhead seems to be roughly linear to the ratio.

Is it a problem that for lazy at 100% the overhead is large? Isn't it so that in most realistic cases the ratio will be closer to 0% than 100%. In at least one case the opposite is true, consider Seq.upto. It turns out Seq.upto uses Lazy<_> to cache the current value (or exception). Normally the current value is accessed just once and then the next value is computed. That means in this case the ratio is closer to 100% and then incurs a large overhead if the computation is cheap. During my comparison of data pipelines in .NET this turned out to be the source of most of the overhead of Seq over other pipelines.

Personally, I am sceptical of mutually exclusive regions of code (like Monitor.Enter/Monitor.Exit). One of my reasons for this is the dreaded priority inversion. Now on Windows and non real-time Linux this isn't much of a problem in general but when working with real-time system priority version is real problem. In addition, the real-time distributions of Linux I had the pleasure of working with had severe problems in the futex implementation which meant that a futex could lock-out a different process (!) if we are unlucky. So by avoiding mutually exclusive regions we avoid these problems.

On the other hand, implementing thread-safe code without mutually exclusive regions is really hard as it requires whole different understanding of how the compiler, jitter CPU, cache and memory system rewrites your code in order to speed it up. Basically, reads are scheduled earlier and writes are delayed. Reads & writes that are deemed unnecessary may be eliminated. These rewrites works brilliantly in a non-concurrent environment. In a concurrent the rewrites makes it impossible for you to look at the code and deduce what happens (because this is not the program that is being executed). Because of this the simple double-check locking is actually quite hard to implement. Mutually exclusive regions restores sanity but as mentioned above has their own problem.

Hope this was interesting to you,