I took it to heart when @kassandra_perch said to document everything durring her talk at EmpireJS. So I documented my whole process, what went right and what went wrong.

This document is unfinished and is not a complete tutorial

The primary way to interact with a Raspberry Pi is to use WiFi and SSH. The problem with this is that the WiFi on the Pi needs to be configured and in order to do that you'll need a monitor. I've tried to edit the wpa_supplicant.conf by using the SD card's file system. I achieved this with minimal success the problem with this is that you still need to get the IP address of the Pi, even if it's connected.

Alas, there's another way! Using a wire referred to as the "USB to TTL Serial Cable - Debug / Console Cable for Raspberry Pi".

Note: The Raspberry Pi has a power cable, you know the one that plugs into the wall. It is important to note that the Raspberry Pi has another alternative way to be powered. It's the farthest most pin from the board on the corner is a 5 volt input not output, as I misread several tutorials. The cable we're using has a red wire that powers the Pi. This being said you should only use one methods of powering the Pi.

DO NOT USE THE RED WIRE AND POWER ADAPTOR AT THE SAME TIME! 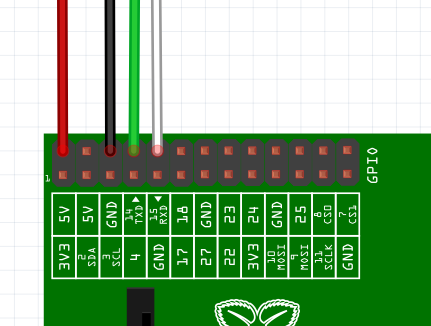 Note: I originally had the white and green wires reversed because of this rpi wiring image image from a adafruit tutorial, which is why I had the diagram. Special thanks to Francis Gulotta @reconbot.

Below are links for the two options for getting the PL2303 driver to work on OSX Mavericks. I've tried NoZap in the past with no luck.

Note: It seams you can't have two of the same drivers installed. If you run the NoZap .app file again it will uninstall it, then close terminal and unplug / plug in the Pi.

I'm going to use try using the osx-pl2303.kext for the rest of this tutorial.

We're gonna use the screen command, which is a terminal emulator. We have to point to the usb port and pass in 115200 (Speed | Baud rate).

Enter screen/cu. then press tab it will show you a couple of options for drivers. When the usb wire is unplugged it shows only a couple of Bluetooth drivers, but when it's plugged in it shows the PL2303 driver and the number 00001004.

this later changes for me to, (remember to tab through options!)

Here's my inittab file and my cmdline.txt file.

Like a gift from the gods someone (lurch) made this, rpi-serial-console which checks both cmdline.txt and inittab.

Using the tool I'm getting an error, follow that issue to see how I got the tool to work.

After all this, I run the screen command again to continue to get a blank terminal window or resource busy.

Where I left off