This project aims to improve the MergeFunctions pass of LLVM to have feature parity with MergeSimilarFunctions, a pass which can merge not just identical functions but functions which are similar. This results in a reduction of the code size. Further incorporate MergeFunctions with support for ThinLTO, a link-time optimization. This work will benefit areas in which code size is of vital importance, say embedded systems. The problem of future divergences of IR which may result in mis-compiles, as the comparators not being updated is also tackled.

MergeFunctions is a pass which merges exactly similar functions, where as MergeSimilarFunctions can merge functions which are not exact replicas but are similar. Two functions with differences are merged into a single function and augmented with the appropriate control flow to handle the differences[1] . The level of similarity needed to merge can be user defined. The figure[1] below shows how two functions different yet similar, can be merged by attaching an additional argument to account for the function variant being called and adding phi instructions to get the required result. 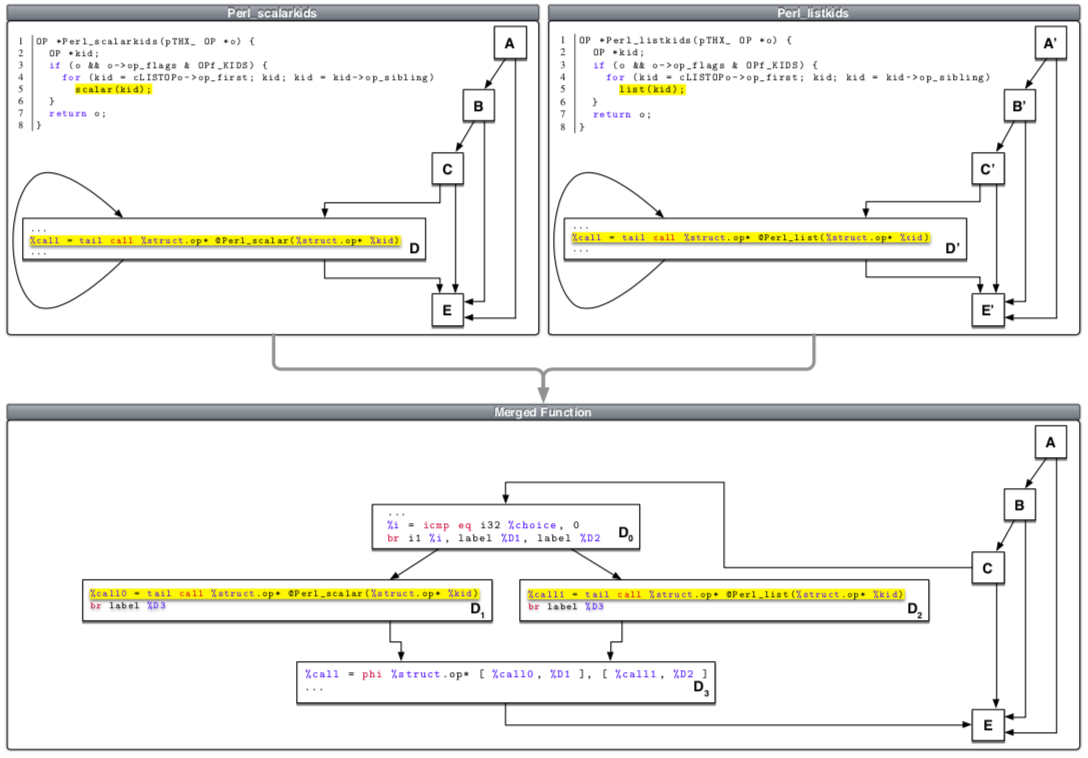 The current MergeFunctions approach uses a logarithamic search for comparing functions which have the same hash. Currently MergeFunctions uses FunctionComparator to compare functions. This FunctionComparator class compares IR by a method cmpOperations which has equality checks for non-trivial IR types. For any change in the IR, this method needs to be updated too. Failing to do so, can lead to subtle mis-compiles which are hard to detect. If a new instruction is added or a new operand is added to an existing instruction, the comparators if not updated may treat instructions equal, which are actually unequal leading to mis-compiles. https://reviews.llvm.org/D79261 is one such mis-compile caused by not updating the FunctionComparator when ShuffleVector class has been changed.

In the patches, MergeFunctions is being scheduled twice. The first one which does PreciseMerging and in the second PartialMerging is being done. These passes are scheduled right next to each other in the optimization pipeline. This can be improved by changing the order. MergeFunctions can be scheduled to do PreciseMerging in the early stage, to reduce the amount of optimization work which needs to be done and thereby improving the compile time. And towards the end of the pipeline after the optimization work on every function is done, MergeFunctions can do PartialMerging to reduce the code size.

Currently, the option to whether or not to merge similar functions can be given as a command-line argument with LLVM opt tool.

To do only precise merging(merging of exact replicas):

LLVM, MySQL and Qemu are selected as benchmarks. The compilation time and build sizes of all the three benchmarks have been noted with the following apparatus.

To show the extent to which MergeFunctions can be useful, quoting the top 10 results of MySQL and Qemu from the experiment of compiling with Clang 11.0.0 by switching MergeFunctions on and off(baseline). The text segment sizes are being reported in the tables below.

Due to various reasons, the patches are still under review. The comments on the patches are being actively addressed. The improved MergeFunctions patch can merge potentially similar functions. Also, the benchmarks need to be recorded while running MergeFunctions pass enabling and disabling the similar functions switch. There is a need to try various other benchmarks like Chrome/Webkit and check there are no mis-compiles being generated when running LLVM with MergeSimilarFunctions switched on.