Install it the same way you install any other BetterDiscord plugins.

dev version may come with faster updates/fixes to the custom packs feature, but they usually haven't gone through Pitu's/Kana's reviews (Magane's creator).

dev vs dev-github: the former is the version built in my own machine and hosted in my own server, the latter is built and hosted at github, BobbyWibowo/Magane. The former tends to be more experimental than the latter.

Magane now have some functions that can be executed from the Console (Ctrl+Shift+I in Discord app):

Use this to add packs from the LINE web store (in case you don't want to bother Pitu/Kana ).

This was inspired by bd-linestickers plugin, and was originally done in harjitmoe's fork. I only expanded upon the functionality (e.g. animated stickers support), so props to those folks!

Unfortunately Discord recently stopped animating APNG (Animated PNG) in chat, which is the format LINE uses for their animated stickers.
And thus animated stickers added with this method will not be animated.
So if you really need those animated stickers, you will have to request Pitu/Kana to add them to Magane (since they will be converted to GIFs).
Optionally, you can try the more advanced method of making custom packs, but it can be more effort than worth.

What you need to pay attention to here are firstid, which is 37788, AND count, which is40. With it, you should see something like this (don't worry if some strings aren't the exact same):

Look at the line that says https://stickershop.line-scdn.net/stickershop/v1/sticker/..., the ID is the numbers right afterwards, which is 37788.

As for count, it's the count of how many stickers there are in the pack.
For this you would have to count them manually, or you can choose to run this one-liner script in your browser's Console:

The said pack should have 40 stickers.

So after running the said command in your Discord app's Console, you should see something like this:

After adding a pack, you still need to subscribe to it from the subscription menu to start using them: You can try using this userscript instead: https://greasyfork.org/en/scripts/373429-line-append-string/code.
However you'd need a browser extension that lets you install userscripts, such as Tampermonkey, Greasemonkey, etc.

With it, you will be able to see something like this on every sticker pages: 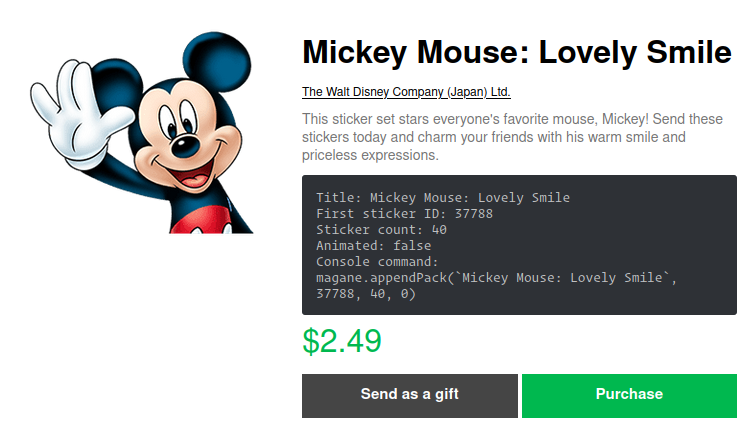 Then you can simply run the line after Console command: in your Discord's console, and you're almost done! (don't forget you still need to subscribe to the pack from the subscription menu)

This one is for the more advanced users.

You can use this to add your own custom packs that are hosted anywhere else, as long as the stickers can be hotlinked.

An example to add one of my custom packs, Azur Lane Pixel Stickers:

What you need to pay attention to here are id, which is k9HCOlIRkV, then count, which is 15, AND finally template, which is https://i.fiery.me/stickers/%pack%/%id%.

The extension name needs to be .png if not animated, OR .gif if otherwise.
In the example above, I have it as true because the pack is indeed animated.
Custom packs cannot mix extension names, so a pack can only be either fully animated OR not.

So for the example above, Magane expects the stickers to be hosted at https://i.fiery.me/stickers/k9HCOlIRkV/, and the individual stickers are named as 1.gif, 2.gif, ..., 15.gif.

Don't forget that after adding a pack, you still need to subscribe to it from the subscriptions menu to start using them.

This is used to delete custom packs.

Now there's another thing that you need to pay attention to!

For packs that you added with magane.appendPack(), their internal IDs are startswith-<firstid>, where <firstid> is the ID of the first sticker in the pack.
So for the example Mickey Mouse pack, its ID would be startswith-37788.

For packs that you added with magane.appendCustomPack(), their internal IDs are custom-<id>, where <id> is the ID you initially input in the function.
So for the example Azur Lane Pixel Stickers pack, its ID would be custom-k9HCOlIRkV.

So for example, when you want to delete the Mickey Mouse pack, you'd run:

This is a helper function to search for added packs.

keyword is the search keyword, and needs to be a string.

So for example, to search for the Mickey Mouse pack, you can do any of these: