Kruskal's algorithm - efficient algorithm for constructing the minimum spanning tree of a weighted connected undirected graph. The algorithm is also used to find some approximations for the Steiner problem.

The algorithm solves the problem of finding the minimum spanning tree (MST).

The problem of finding the minimum spanning tree is often encountered in a similar setting: for example, there are n cities that need to be connected by roads so that one can get from any city to any other (directly or through other cities). It is allowed to build roads between given pairs of cities and the cost of building each such road is known. It is required to decide which roads should be built in order to minimize the total cost of construction. 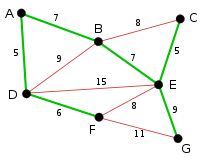 At the beginning, the current set of edges is set to empty. Then, while it is possible, the following operation is carried out: from all edges, the addition of which to the already existing set does not cause the appearance of a cycle in it, the edge of the minimum weight is selected and added to the already existing set. When there are no more such edges, the algorithm is complete. The subgraph of a given graph, containing all its vertices and the found set of edges, is its minimum weight spanning tree.

First, let's sort the incoming list of edges by weight. Thus, taking the elements sequentially from the list, each time we will receive the edge with the minimum weight among the remaining ones.