There are many changes in the Fuzz module:

Here are the details:

There are now no more Shrinkers! All simplification is automatic. This is thanks to the integrated shrinking approach popularized by the Hypothesis library.

With Fuzz.custom gone and with Fuzz.andThen added, it should now be always possible to mirror your Random.Generators with Fuzzers. Take a look at the Random to Fuzz translation section for examples and more help.

This function lets you test out your fuzzers—say, in REPL—during development. It will use a hardcoded Random seed and generate a few example values from the fuzzer:

The pair and triple-creating functions have changed their API, and should now be nicer to use.

The star of this section is undoubtedly Fuzz.andThen. This function missing is a big part of why people have been reaching for Fuzz.custom and defining their fuzzers via Random.Generators, where Random.andThen is available.

With Fuzz.andThen now being available, you have total freedom in how you'll define your fuzzers. (But also, if some of the helpers like Fuzz.listOfLengthBetween do what you want already, we advise you to use them instead of Fuzz.andThen, as they've been tuned to work better with the simplifying algorithm.)

Fuzz.filter allows you to reject/keep values based on a predicate, but note it will always be better to generate good values instead of generating a mixture of good and bad values and filtering the bad ones out. The Fuzz.filter function will bail out after 15 consecutive rejections!

Integer fuzzers prefer generating smaller values by default. We've introduced functions Fuzz.intAtLeast and Fuzz.intAtMost which use Random.minInt and Random.maxInt as their limit values, removing the need for you to import the Random module.

The Fuzz.uniformInt n fuzzer generates integers in range 0..n inclusive, without any bias towards smaller values.

Floats have received a lot of care in this release. All float fuzzers will now prefer simplifying to nice values:

Unfortunately there was no easy way to keep this behaviour for Fuzz.floatRange and certain intervals inside Fuzz.floatAtLeast and Fuzz.floatAtMost, so it's preferred to keep using Fuzz.float if you don't need to constrain the float range.

Fuzzers will also try edge cases like NaN, Infinity and -Infinity. If you don't want these generated, there's Fuzz.niceFloat that skips them.

Fuzz.weightedBool behaves like a biased coin: it will give you True with the probability p you give it:

Fuzz.lazy is helpful when defining recursive fuzzers for your ASTs. If you'll need it you'll know!

Fuzz.fromGenerator is an escape hatch. Please don't use . It allows you to use a Random.Generator as a Fuzzer, but the simplification process will be effectively turned off: it will have no idea what's a simpler value. It will always result in better results if you create proper fuzzers instead.

The Expect.true and Expect.false functions were a solution that was too easy to reach for while better solutions were possible.

If you're certain checking a Boolean really is what you want, you can still achieve the same with your current error messages via a combination of Expect.equal and Expect.onFail.

This function has been deprecated for a long time (1.0.0–1.2.2) with the following message:

DEPRECATED. In the future, test runners should implement versions of this that make sense for their own environments.

We've added new Expectations for Html tests that allow you to check whether an event handler will stop propagation or prevent default behaviour of the event or not.

We've made the internal naming change from shrink to simplify, and this touched the low-level helpers inside Test.Runner. Due to reimplementation of the underlying simplification process the API of the two functions has changed somewhat too, but all the intended usecases should still be doable. Let us know if you have some special needs!

With the advent of Fuzz.andThen, you can now translate any Random.Generator a into a Fuzzer a.

That's good, because we've also removed Fuzz.custom and Shrinkers, so you'll likely need to translate your generators! (There's a Fuzz.fromGenerator escape hatch but it will not shrink nicely at all so you really really REALLY shouldn't use it.)

Here's a table showing how:

Here's a worked example from the Janiczek/transform test suite: 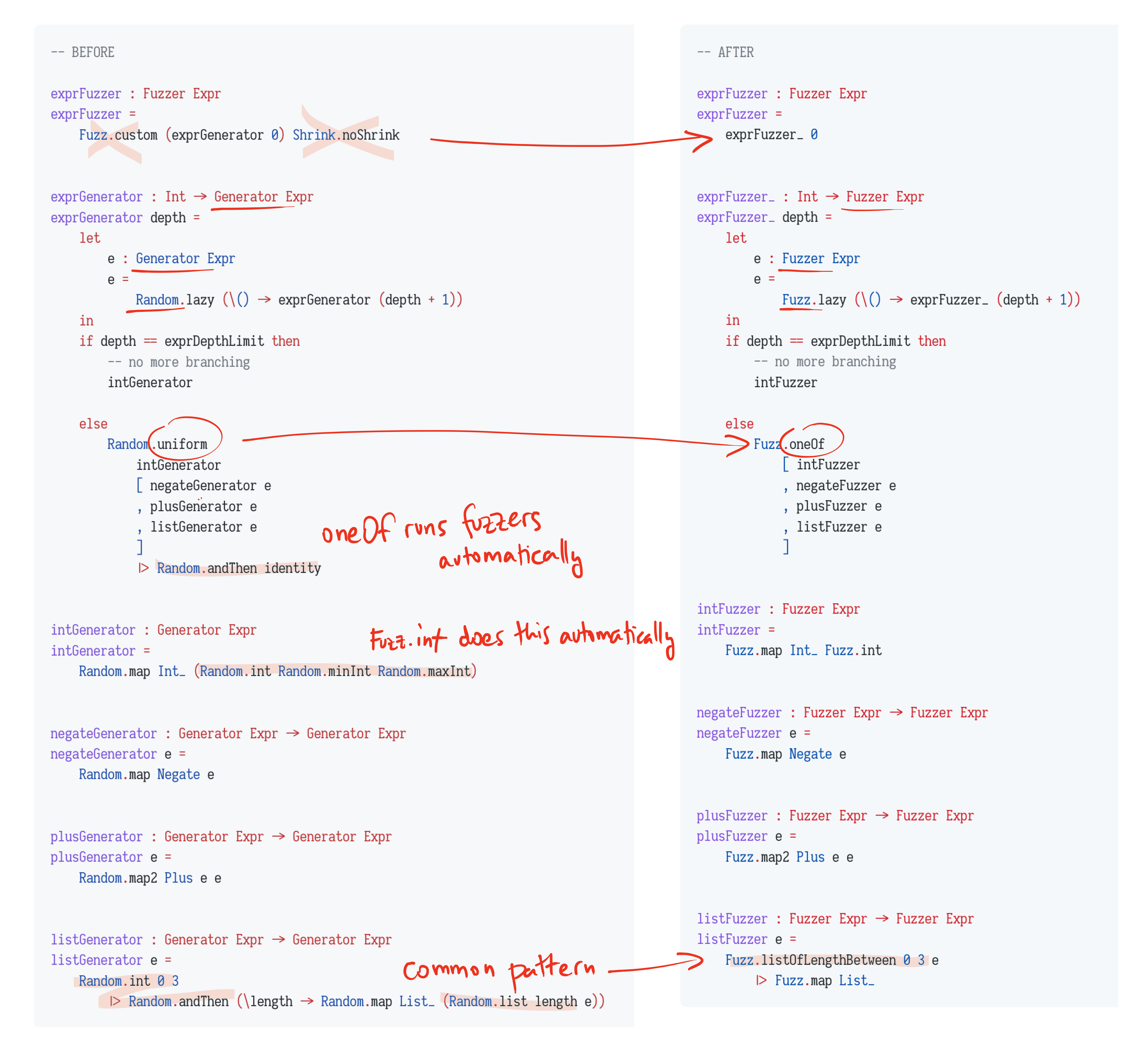