Normalizing to "if it costs one unit to fix at the requirements stage", these work out to 1:3:7:50:100 (requirements, design, coding, testing, maintenance)

It pops up in many books and articles and in various forms, for instance a very 1990s-looking Excel 3D bar chart.

The Big Puzzle is that a bunch of later article and books attribute these ratios to a paper by Boehm and Basili "Software Defect Reduction Top 10 List" which, it is easy to verify, does not contain these numbers. (It's a whole two pages long.)

Ergo, these later authors who are citing Boehm and Basili actually HAVE NOT READ that paper are have just copied and pasted a citation which flattered their existing biases.

What is investigated here is "what exactly happened", a forensic investigation. The crime is how little attention we are paying, as a profession, to the question "what process of empirical investigation generated the data we are looking at, and how reliable was that process".

Listing the works chronologically kind of spoils it as storytelling, since the investigation actually happened in reverse: coming across the claim in relatively recent articles, asking "where did this came from" - and asking it again, and again, and again. This document is a reference, not a write-up.

This was a tutorial given at the inaugural COMPSAC conference. A valued friend with access to a university library holding a copy of the book was kind enough to send me a photo of the relevant page: 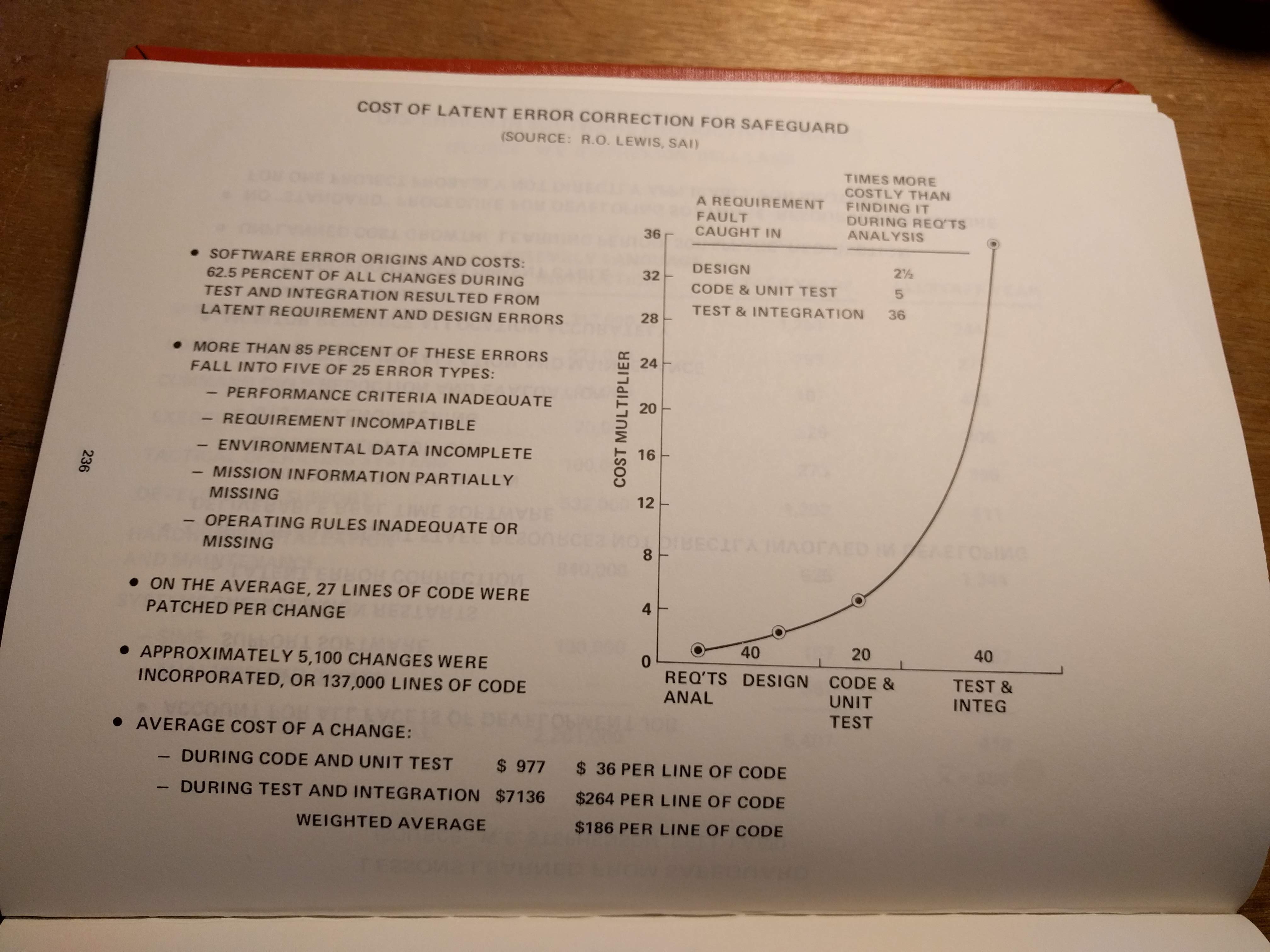 Apparently the origin of the "data" is some software portion of the Safeguard anti-missile program: https://en.wikipedia.org/wiki/Safeguard_Program

The text credits a "W. E. Stephenson" as having collected data on Safeguard, but the chart itself cites a "R. O. Lewis" as the source of the error cost data specifically. These should therefore more properly be called the "Lewis ratios" - Wolverton's name was the one I found in an initial and slightly less tenacious investigation.

We know this is the source because it next appears cited by:

Emphasizing the importance of early detection, Wolverton (Reference 30) cites figures stating that a design change costs, on the average, $977 to correct during code and checkout and $7136 during test and integration (1975 figures).

Exact same method of calculating a ROI for investment in IV&V that we'll see later on in NASA docs (which I've blasted as being "Flaubert math", cf https://www.lesswrong.com/posts/tggnLEXxrTDWQwDL3/rocket-science-and-big-money-a-cautionary-tale-of-math-gone)

The name "Safeguard" appears (without citation or explanation, it seems) in Boehm's "Software Engineering Economics", providing some of the data points on this chart: 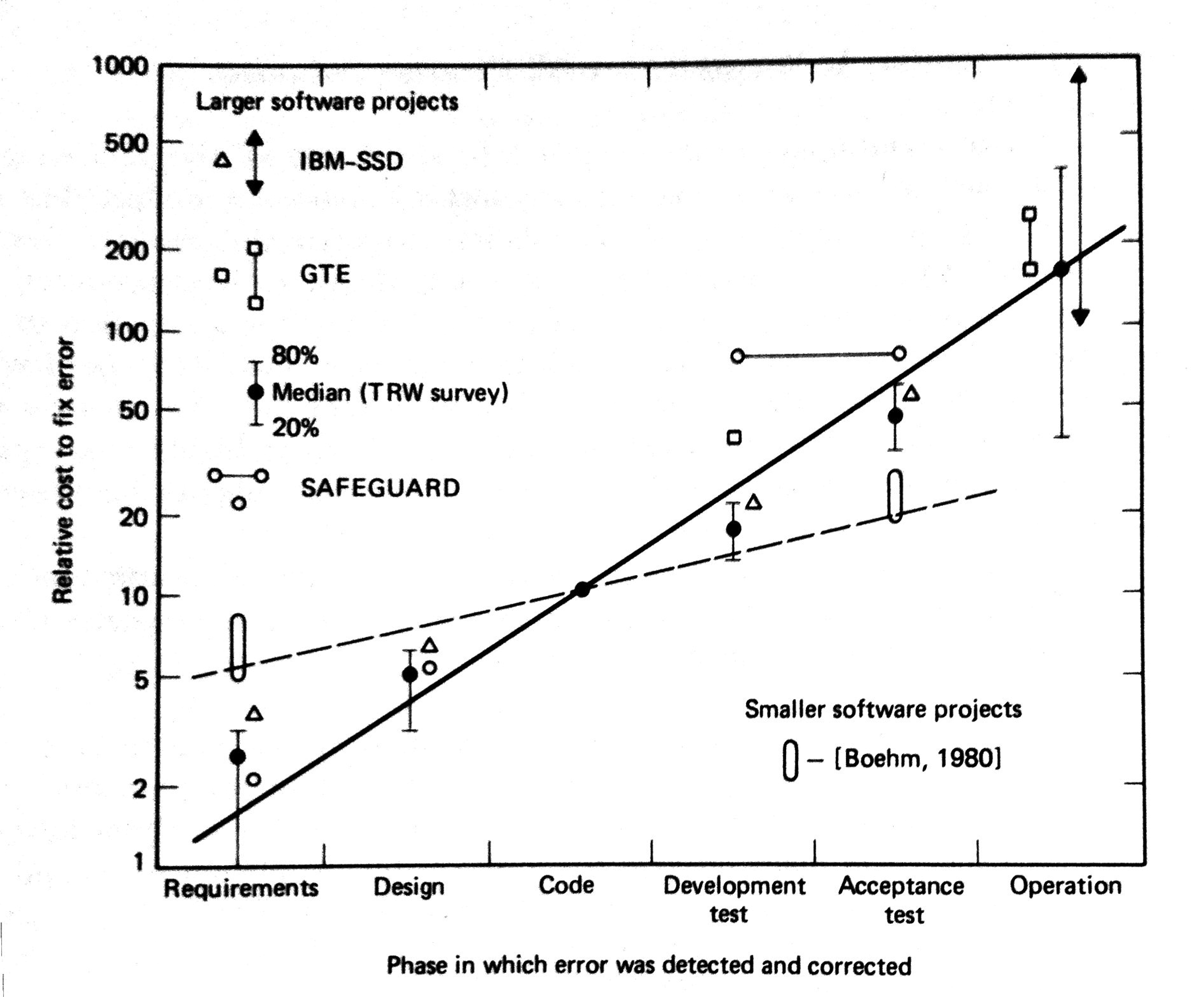 The Safeguard data and some of the process for collecting it is described (over 15 years later!) in Robert O. Lewis' book "Independent Verification and Validation: A Life Cycle Engineering Process for Quality Software" 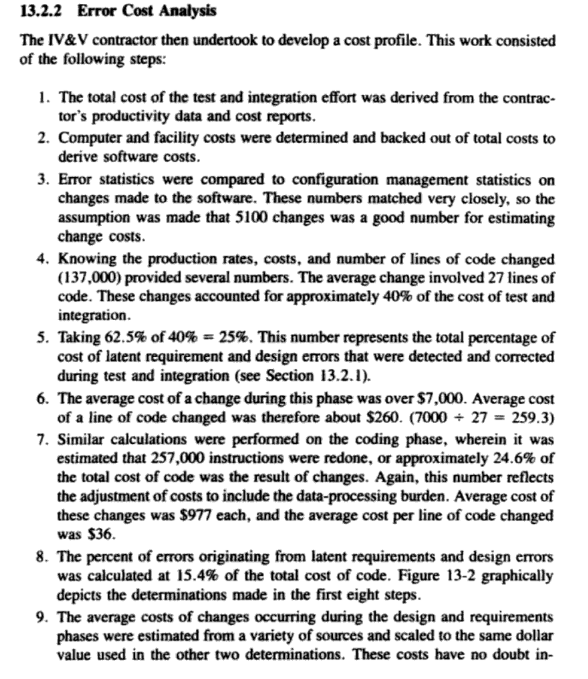 Seems to be "patient 0" for the numbers and the Excel chart and attributing the costs to Boehm & Basili (or possibly, Capers Jones, or Humphrey)

The attribution to Basili & Boehm is obviously bogus.

The attribution to Jones is bogus when you know the slightest thing about Jones, in particular that he's virulently opposed to cost per defect metrics.

The attribution to Humphrey is quickly disproven by looking inside the book (which admittedly people would have needed to buy the book for, today I can use Google Books).

The numbers are off from the Radatz numbers but clearly no coincidence, I suspect they were fudged a bit to avoid the appearance of "round" ratios

"We did nothing wrong"

A negative result: comprehensive survey of cost factors in the literature, no mention of the Wolverton ratios

No chart but a table of the "cost factors"; same Everett as the 2006 book

Figure 14.2, based on data collected by Boehm and Basili [Boe01b] and illustrated by Cigital Inc. [Cig07], illustrates this phenomenon. The industry average cost to correct a defect during code generation is approximately $977 per error.

This is the Pressman of the "Pressman ratios", now in its seventh edition. Boe01b is the "Top 10" article.

It is baffling that the editorial process for possibly the foremost book in the field let this through for the 7th edition. It is apparently gone from the 8th edition, without a retraction as far as I can tell.

This is notable for corrupting the $977 into $937. So if someone is quoting "$937 during coding" at you, they're most likely referencing this Typemock infographic.

"Are Delayed Issues Harder to Resolve?"

We found no evidence for the delayed issue effect; i.e. the effort to resolve issues in a later phase was not consistently or substantially greater than when issues were resolved soon after their introduction.

Haha. Jim 2 quotes Jim 1 and adds "If anyone is credible on this, he is… we didn't have empirical data, but now we do."

Cites the "for dummies" book

Classic example of quoting the Typemock $937 figure but attributing it to Boehm and Basili.

It is also useful to be able to predict issue lifetime specifically when the issue is created, since it is found earlier that delaying to resolve issues can become harder and costlier [Men17].

So here we have a PhD student working under the direction of the author of the one negative result, claiming it as his source for the positive version! I despair.

Through Figure 1.1, it is possible to verify that the error correction cost has a growth quite pronounced as a project progresses between the various phases. With this in mind, effective and efficient quality control is essential from the earliest stages and fundamentally in the phase before the start of production. [Translated from Portuguese by Google Translate]

Yet another. Feels awful to work in an industry where someone can disprove a result yet be cited a few years later as having proved it.