Recipe: from MQTT to InfluxDB via Node-Red

Getting data produced by IoT sensors into a database is practically a mandatory step before effective visualisation (eg dashboards).

This recipe shows you how to get an MQTT payload into an InfluxDB database using three Node-Red nodes. It makes the following assumptions:

This recipe also show how to map between JSON keys and database field and tag names.

Given this MQTT message structure:

the task is to configure the Node-Red instance to:

This recipe also demonstrates how to use abbreviated keys in a JSON message and map those to more meaningful field names (attributes) in the InfluxDB database:

There is nothing magical about either these JSON keys, or the InfluxDB field or tag names. JSON keys do not have to be single characters, and InfluxDB names do not have to be long, meaningful or descriptive. It is just that, in general, IoT devices are memory-constrained so short strings are to be preferred over longer strings; while "meaningful and descriptive" are considered best practice in a database environment.

There is also nothing magical about the choice of these implied data types. They just happen to be the ones you are most likely to need to pass between a client device and a database.

During testing you will find it useful to have a computer with an MQTT client installed. Explaining the full how-to of this is beyond the scope of this recipe so you should start at mosquitto.org/download.

On Linux, it is not immediately obvious that you need either or both of the following:

The first command installs the MQTT publishing and subscribing command-line clients. You will need this package to get the mosquitto_pub command.

The second command installs the MQTT broker. You will only need this if you do not have another MQTT broker running somewhere (eg in a Docker container).

If your copy of InfluxDB is running inside a Docker container, consider adding this alias statement to your .profile:

That alias allows you to connect to the "influx" command line interface (CLI) simply by typing:

The "test" database must be created by hand. If you omit this step you will get an error from Node-Red. You can initialise the database like this:

Back in the Node-Red main window, click the "+" button to add a new empty flow. The default title will be something like "Flow 1". Double-click the title and rename the flow with something more descriptive, like "Influx Test". The actual name is not important.

Drag an "mqtt in" node onto the canvas. Double-click to open and configure as follows: 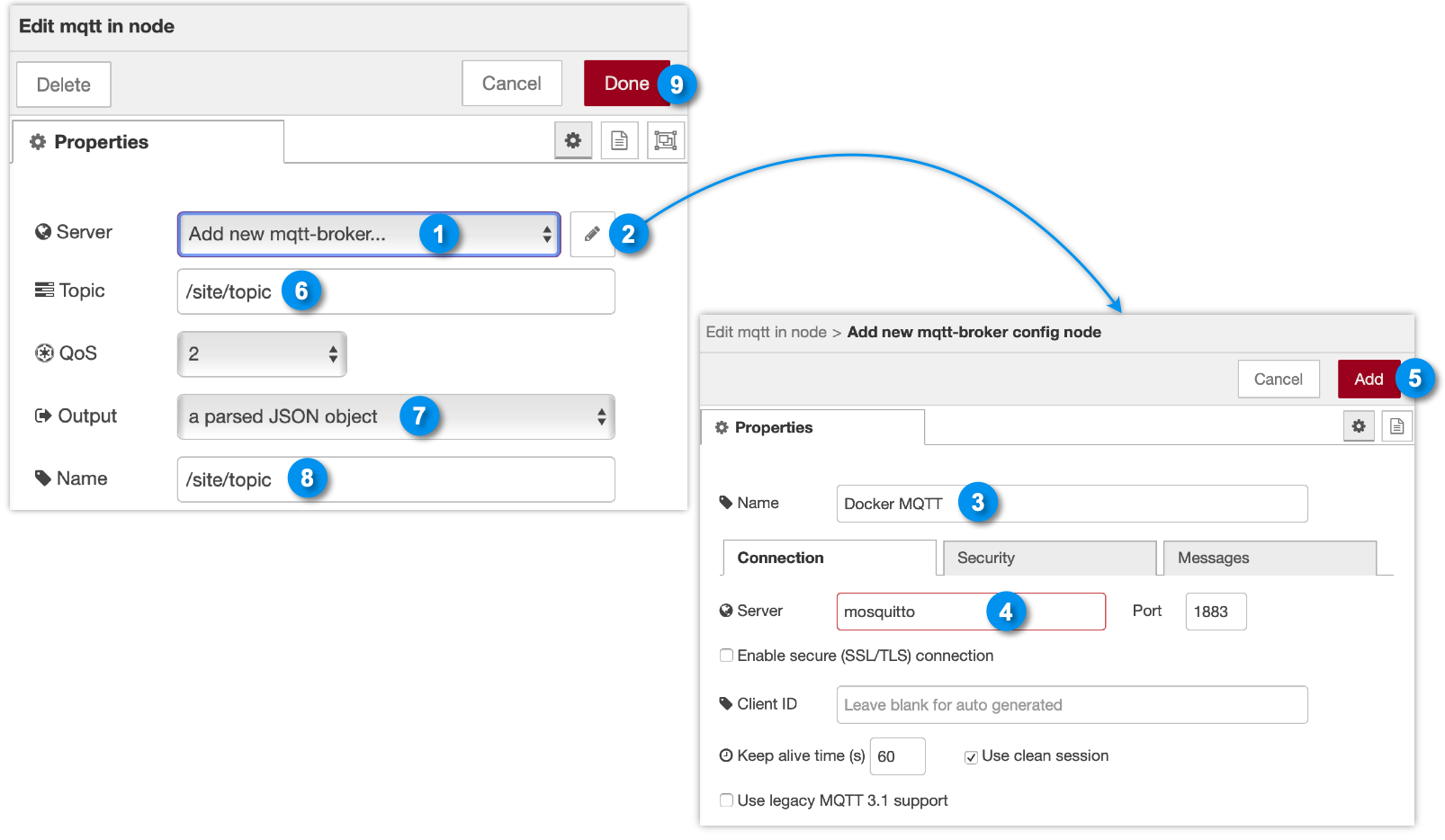 All other fields can either be left at their default settings or changed to suit your requirements.

The purpose of this node is to:

In other words, given an input of the JSON string specified in the task goal, the output from the node will be:

Drag a "change" node onto the canvas.

Connect the outlet of the "mqtt in" node to the inlet of the "change" node.

Double-click the "change" node to open and configure as follows: 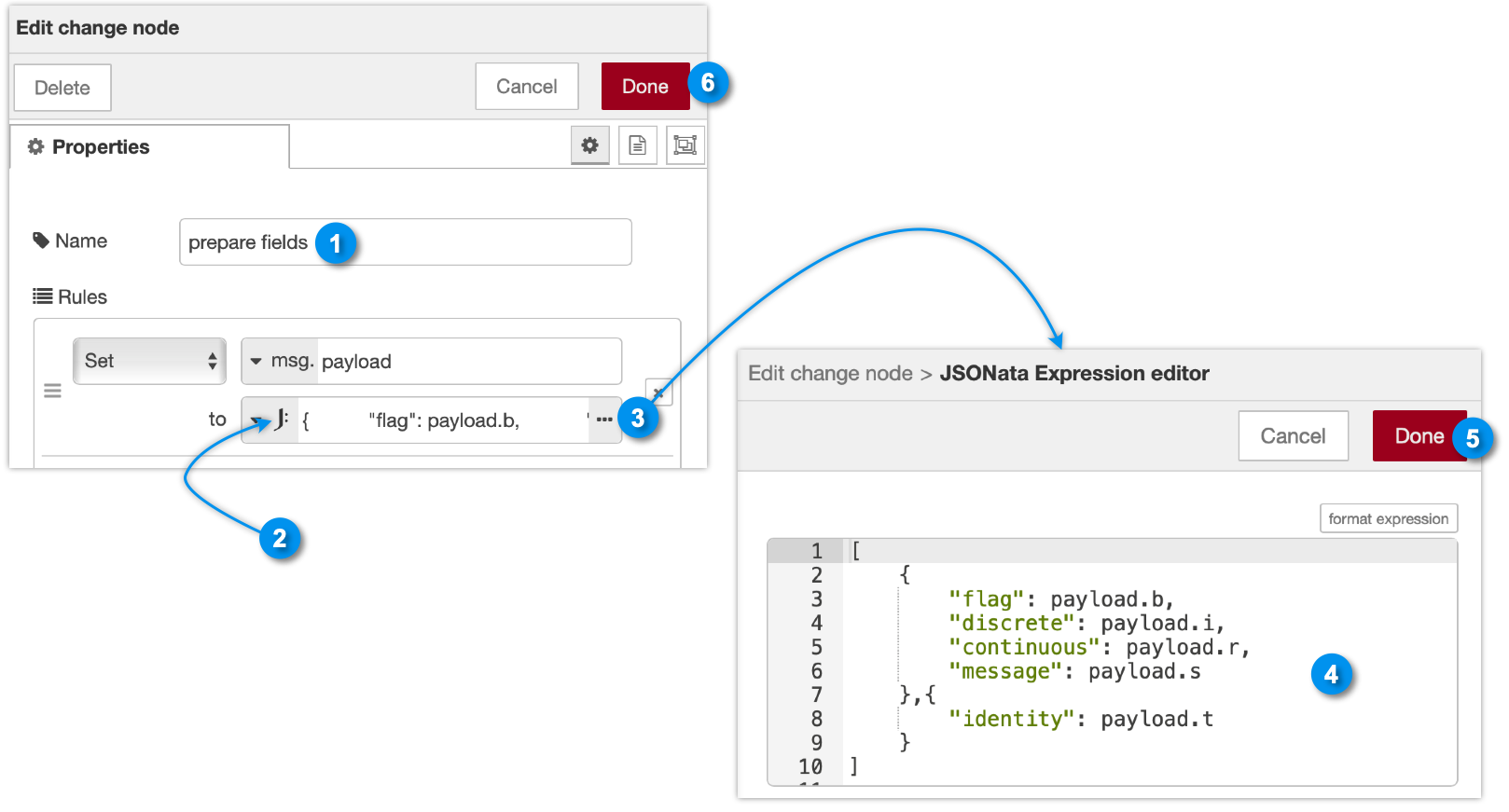 The purpose of this node is to provide a cross-walk between the JSON keys ("b", "i", "r", "s" and "t"), and the field and tag names you need in the InfluxDB database. The basic pattern is:

If you only want to pass fields, then omit the square brackets and the elements that describe the tag(s), like this:

Note that it is feasible to omit this "change" node entirely. If you do that the JSON keys in the Node-Red "payload" variable will become the field names in the database. Before you take that shortcut, consider:

Given the output from the "mqtt in" node, the Javascript expression in the "change" node will result in:

Drag an "influxdb out" node onto the canvas.

Can't find the "influxdb out" node in the palette? Double-check that you installed "node-red-contrib-influxdb" as described above.

Connect the outlet of the "change" node to the inlet of the "influxdb out" node.

Double-click the "influxdb out" node to open and configure as follows: 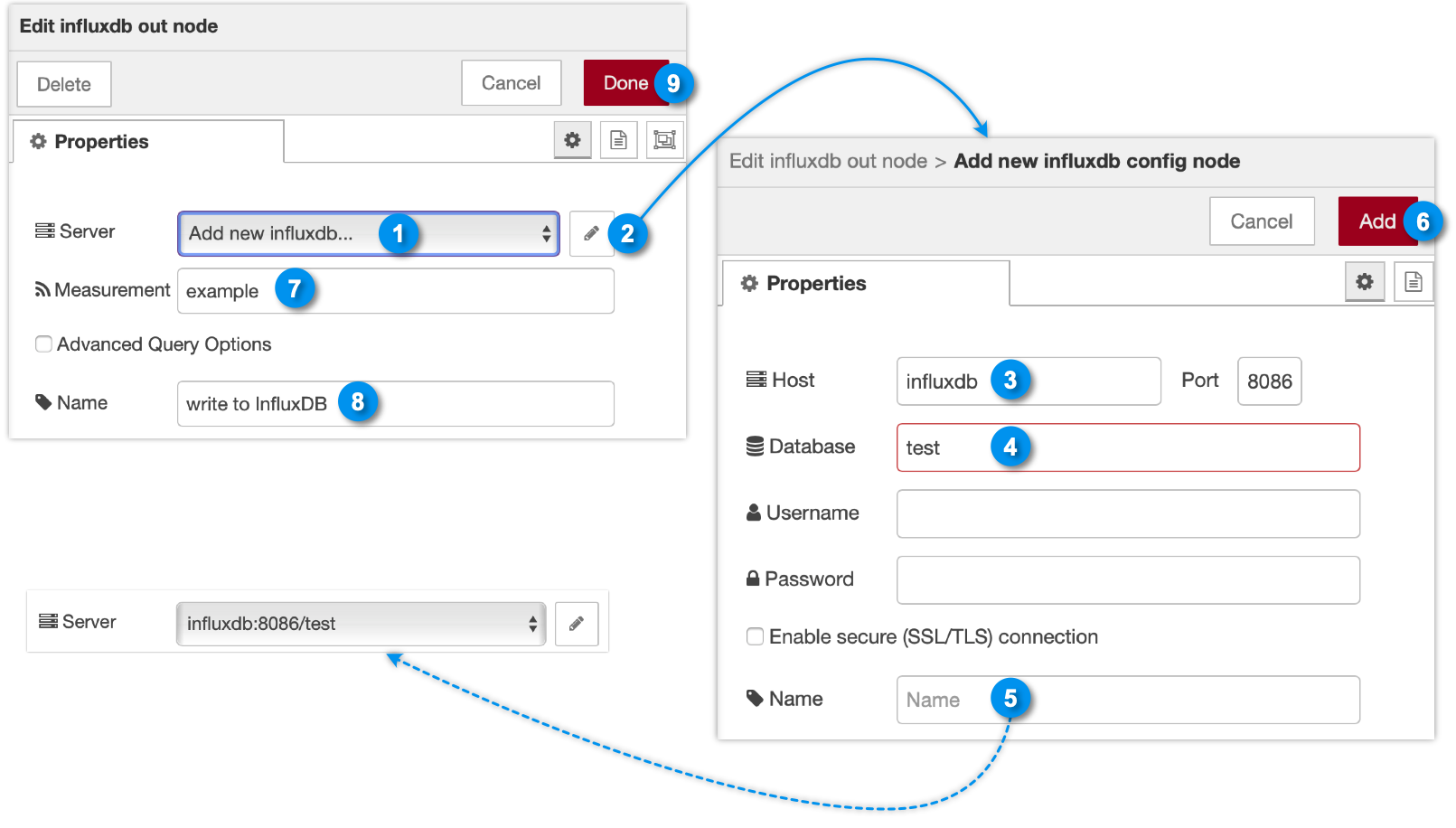 All other fields can be left at their default settings or changed to suit your requirements.

Warning: InfluxDB database connections are global to Node-Red. Suppose you have an existing flow connected to the "test" database. When you create a new flow for a new database, it is very tempting to copy the "influxdb out" node from the old flow, paste it into the new flow, open it, click the pencil icon, and just change the database name. If you do that, you will break your old flow because it will refer to the new database. Always start from scratch by dragging a new "influxdb out" node onto the canvas.

Given the output from the "change" node, the practical effect of this node is:

Click the Deploy button near the top, right of the canvas.

Select the Debug panel (the controls below "Deploy").

Click "Deploy" to activate. Any errors will show up in the Debug panel.

Copy the following text to the clipboard then paste it into a text editor.

Edit the "host" field to point to the server running your Mosquitto broker. This might be an IP address or a fully-qualified domain name.

Paste the text into a Terminal window on your client device and press return.

If all goes well, you will get two debug messages from Node-Red. The first is from the "mqtt in" node confirming receipt of the JSON payload:

and the second is from the "change" node showing the effect of the cross-walk:

To confirm that the data made it all the way to the InfluxDB database:

You can either delete or deactivate the "debug" nodes in the Node-Red flow.

When you no longer need the test database, you can remove it like this: