Thank you to everyone who participated in the Melon Bread Baking Event!

The event lasted from August 15th to the 17th, the rules were simple:

And from those simple rules, a really great game emerged! So I would like to explain a bit more on the origin of the Melon Bread Cooking Event, and my conclusion on this subject.

The origins of the event

I had the idea while thinking about Team Fortress 2, for those who don't know, it was a really good free multiplayer game by Valve, and if there is one thing that they have in common with Satania Dropout, it's that they have a really great community, and they have taken advantage of it multiple times.

And one of the times they did was with Man vs. Machine.

Mann vs. Machine was the co-op mode of TF2 (Team Fortress 2), it takes place in a war against robots, and has a more serious background than any of the rest of the game, it was also highly foreshadowed and thus, it was very anticipated.

So, instead of directly releasing it, Valve did a little "treasure hunt", with files to find which led to a final image, giving a very specific crafting recipe, which, once executed, unlocked the mode for everyone.

But the way those files had to be found was pretty smart, you had to:

And that was really fun because then people had to go on servers and high-five as many users as they can, and a lot of people enjoyed it! And it must have been a really fun event.

So you can see the similarities, two users do an action together, and this action must be done with as many pairs as possible (as doing a high five with the same person leads to the same code).

And I think the TF2 MvM event and the Satania Dropout Melon Bread events were very successful for the same reasons.

Let's look at other events we've had:

Other events all had something in common: they put the members in direct competition.

But the Melon Bread Cooking Event is different, it's all about cooperation, by playing and cooking, you get points, but you also give other points.

If any of the players in top of the leaderboard hadn't participated, the rest of thge players would have obtained less Melon Bread. This kind of cooperation is very healthy.

But here is something else that greatly affected the way players percieved the event: The global Melon Bread counter

This can seem very small, and to me actually it seemed so, but it turned out it was a very major element.

The global Melon Bread counter reflects the overall progress of all players, and people cared about it way more than I would have expected. Because thanks to the Melon Bread counter, players were feeling like they were part of something, a great community effort, and would get excited when milestones were reached, it also created micro-competitions to be the one to bake this milestone Melon Bread.

And I think that because of that, people didn't see this event as a "tournament" or anything, but more as a goal shared by its participants, as if we were all on the same boat going in the same direction, doing our best to go as far as possible.

And this is why I think the Melon Bread cooking event is the best event we've had so far, because it truely reflected what is great about all being in the same community

So in case you're wondering why some bots are featured in this leaderboard, allow me to explain.

Members figured out that bots can cook if they send a message starting with s!bake.

So here is how we did it:

And now, the moment we're all waiting for... 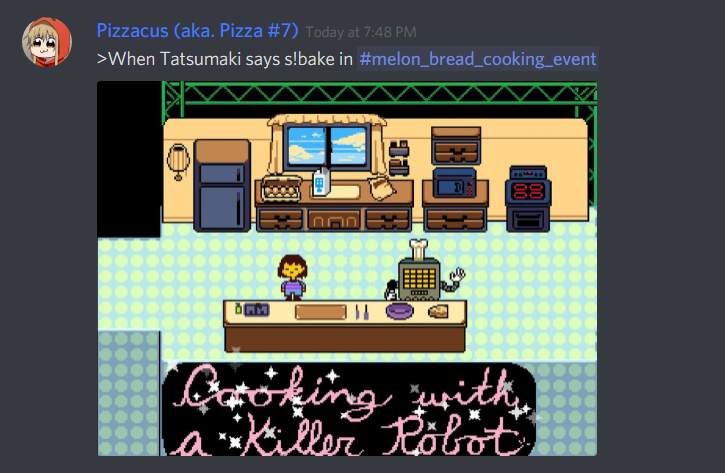