Tips and Tricks regarding Minecraft 1.16

WARNING: The following instructions are deleting parts for your Minecraft world. Make sure to create a full backup before proceeding with any of those steps!

If you need help or have questions, feel free to join the new Discord server!

Deleting chunks based on a selection

Usually, the Nether does not contain too many builds. Most of the time it's a Nether highway or some Nether mob farm. Knowing where those farms are located might help with the process, but MCA Selector should give a relatively clear overview of the Nether.

A selection can be made by left-clicking either chunks (when zoomed in) or entire regions (when zoomed out). Holding and dragging works too.

To delete the selected chunks, use Selection --> Delete selected chunks. Opening the world in Minecraft and travelling to those chunks will regenerate them using Minecraft's current terrain generation.

Deleting chunks based on a filter

Automatically filtering chunks is particularly useful for very large worlds, especially when you are running a server with lots of players.

A filter can be used to select, delete or export chunks based on a few conditions, for example the time players have spent in specific chunks or the blocks a chunk contains. 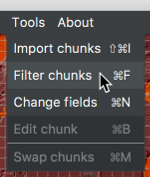 Open a world and navigate to Tools --> Filter chunks. This will show an example query that will select all chunks from x/z -1600 to x/z 1600. Below the filter is a text field, where a textual representation of the query is shown that can also be used in headless mode. To use a textual query, insert it into the text field and press Enter. If the query is valid, it will parse and show it in the query editor above.

Examples: Query all chunks where players have spent more than 5 minutes in total: 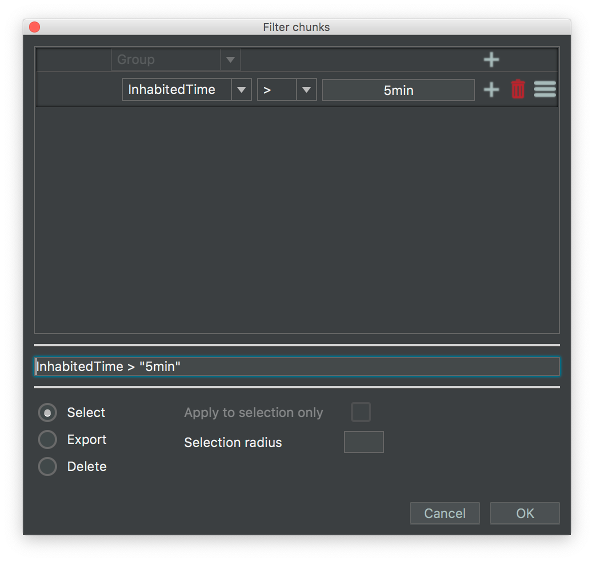 Query all chunks where players have spent more than 5 minutes in total, contain a chest block and where chunk-x is smaller 3000: 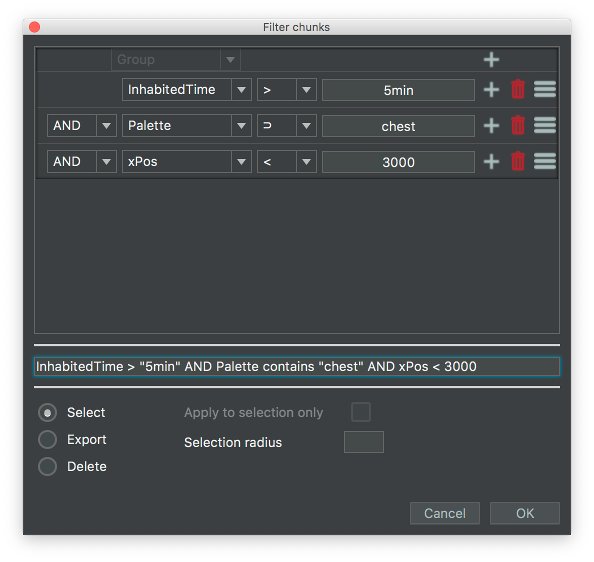 The Filter window also has a few options at the bottom to either first create a selection as if using right-click to select the chunks on the map, to delete the chunks that test positive for your query directly or to export those chunks to a new empty folder.

A chunk is made of 16 vertically stacked sub-chunks, called Sections. Sections are indexed from 0 (lowest) to 15 (highest). This especially comes in handy when farms and highways are built above the Nether ceiling, because there is a relatively clear cut where the generated Nether ends and where the builds start.

The simplest (but also most unpredictable) method to keep builds above the Nether ceiling but regenerate everything below is to delete all Sections from 0 to 7 and setting the Status field of the chunk to empty. 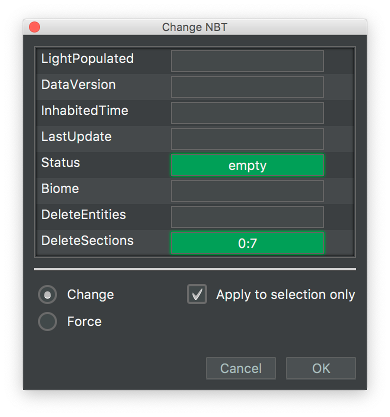 This might have some unwanted (or wanted) effects on generated structures, such as Fungi forests or Basalt deltas. Structures from basalt deltas will generate on top of structures on the nether roof, while they will not generate below:

Chunks can also be partially imported. This is more reliable than deleting and regenerating sections as described above and theoretically allows to also keep builds below the Nether ceiling, but might also result in a lot more work.

To make this work, all chunk we want to import need to have the same DataVersion as the chunks we want to merge them with. The simplest way to do this is to use Minecraft's "Optimize World" feature. The image below shows a Nether highway in our freshly upgraded 1.16 world:

Next, we will export our highway. Use the method of your choice to make a selection, and export. Here's how the exported nether highway looks like:

Then, we open Minecraft and generate all the chunks we need to import our Nether highway. The newly generated chunks look like this:

After we did that, we import our Nether highway into our new chunks with the following settings: 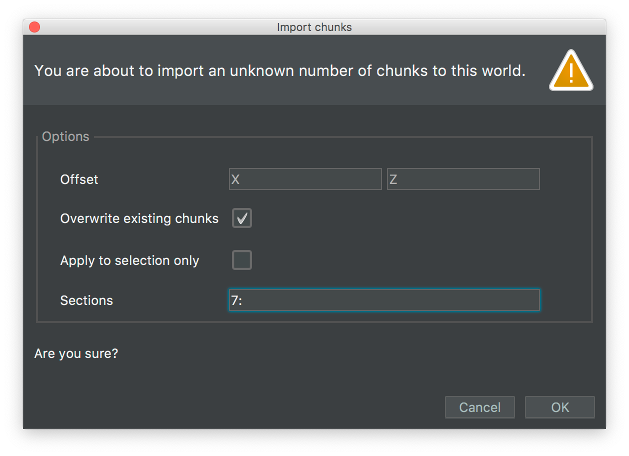 Hitting OK and waiting for a second rewards us with this:

Alternatively it is also possible to create a selection first and only allow the chunk import to insert chunks at your selection, to make sure that that import only merges chunks into already generated chunks.