Allow knocked out players to drive in warmups

What you all have been waiting for. Anyone can come and play the warmups during a knockout. If you are knocked out and prefer to spec, you can go to spectator mode during a warmup and remain in spec for the rest of the knockout.

Players who are eligible to be forced back into the knockout, will be. If you happen to disconnect, you'll be able to rejoin until the next live round has ended. This means you can still rejoin after the warmup, but then with a late start.

The new plugin removes the need for setting a password on the server. When joining the server, you'll be forced in if eligible and forced to spec otherwise, regardless if you join as spec or not. If you're too late and join as a spectator, you'll stay as a spectator. That is, until you leave spec mode during a warmup phase.

Automatic skip if track author is in the knockout

When proceeding to the next track, and with 7 or less players in the knockout (by default), the plugin will skip the next track if the author is still in.

Used the wrong key to skip the intro?

If someone retires before the race starts, and false start detection is on, the round will be restarted. But not for warmups!

Whenever two or more players tie and only some of them are subject to getting knocked out, the script will restart the current track with the tied players only, and other players who are still in are temporarily put to spec. Once the tiebreaker ends, the knockout resumes as normal on the next round. This is a rather experimental feature so expect it to break!

Things can get a bit hairy when everyone suddenly starts playing in the warmups. Now, a status bar is shown at the top part of the screen showing knockout information and your player status. This can be disabled by clicking the Tm-Gery button on the top left - in that case, the knockout information will be shown in chat instead. The update also introduces a scoreboard that will show who's getting knocked out and who's dangerously close. It will show 10 scores, and if there are more players then it will be limited to top 3 and bottom 7.

Support for multiple rounds per track

KOs will be performed for each round, with every surviving player given 1 point.

Opt out of a knockout

You may now use /opt out if you don't want to participate in a knockout once it is scheduled to start and when it is running. If you're eligible to rejoin, you'll have limited time to opt back in using /opt in if you change your mind.

How the dynamic multiplier works

First, a base curve base_curve(r) is defined. It defines the relative amount of additional KOs per round r over the baseline of 1 KO/round. 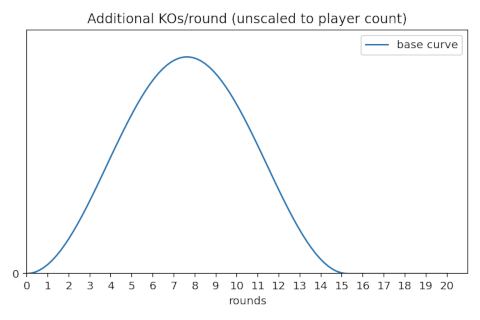 Then, the goal is to find a discretized, scaled curve c[r] = [a * base_curve(r)] + 1 such that the sum over c[r] for all rounds equals the total number of KOs to be performed. This is done by approximation; we start off with an initial value of a and calculate the sum of c[r]. If the sum is too small, a is incremented; too big and a is decremented. This is repeated until we find a value for a of which the sum of c[r] equals the total number of KOs.

With 40 players, 20 rounds and no unexpected KOs, the number of KOs/round and overall player count will look like the following:

Each round, the curve is recalculated to adjust for any inaccuracies. In the case of a mass KO, the curve adjusts itself because the remaining number of KOs becomes reduced, thus leading to a more straightened curve. The graphs below show how, in the same 40 player knockout, the curve is adjusted after a round with 4 additional DNFs (7 players knocked out):

The base curve is defined in a way that there will always be 1 KO for the last 4-5 rounds, regardless of the player and KO count. Whether it will be 4 or 5 rounds depends on the possible solutions for the scaled curve. Because of the fact that we deal with discrete space, there is a small chance that the curve may not be solvable. In this case, the curve is readjusted ("smoothed") by 1 KO for that round only.