Why do we need object detection?

Image features are interesting areas (such as edges, corners, blobs) somewhat unique to that specific image, also popularly called key point features or interest points. By analysing the image, identifying a set of key points and computer a descriptor vector or feature vector for each key point, we can analyse, describe and match images in the application of image alignment, 3D reconstruction, robot navigation, object recognition, motion tracking and more. Some of the popular feature detection techniques are listed below:

HAAR classifier method proposed by Paul Viola and Michael Jones in their paper, "Rapid Object Detection using a Boosted Cascade of Simple Features" in 2001. It is a machine learning based approach where a cascade function is trained from a lot of positive and negative images. It is then used to detect objects in other images. Features are extracted using sliding windows of rectangular blocks. OpenCV already contains many pre-trained classifiers for face, eyes, smiles, etc. Those XML files are stored in the Users\liangx\AppData\Local\Continuum\anaconda3\Lib\site-packages\cv2\data.

Tensorflow object detection API, which is pre-trained by Google, is a very good open source to be able to detect up to 91 categories of objects. It was trained on COCO data set (https://arxiv.org/pdf/1405.0312.pdf) and some other data sets. Please see table below for selected pre-trained candidates (which is bold in list). Fortunately, for those objects were not selected and not pre-trained in the API, there is possible way to re-train the detector API for the specific object detection. An example of re-train Tensorflow object detection API for hand detection: https://jkjung-avt.github.io/hand-detection-tutorial/

The ImageNet project is a large visual database designed for use in visual object recognition software research. The ImageNet project runs an annual software contest, the ImageNet Large Scale Visual Recognition Challenge (ILSVRC), where software pr ograms compete to correctly classify and detect objects and scenes. Here are the CNN architectures of ILSVRC top competitors, which are available in Keras with pre-trained models and weights. https://keras.io/applications/

Models for image classification with weights trained on ImageNet: 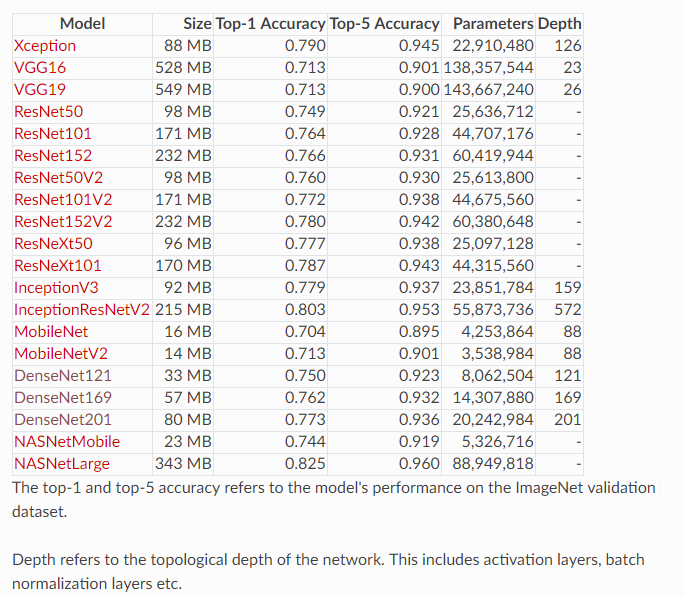