This proposal and the accompanying pull request describe a modification to the Scala type system that makes reference types (anything that extends AnyRef) non-nullable.

This means the following code will no longer typecheck

Instead, to mark a type as nullable we use a type union

Read on for details.

There are two type hierarchies with respect to Null, depending on whether we're before or after erasure.

Before erasure, Null is no longer a subtype of all reference types. Additionally, Null is a subtype of Any directly, as opposed to AnyRef.

After erasure, Null remains a subtype of all reference types (as forced by the JVM). 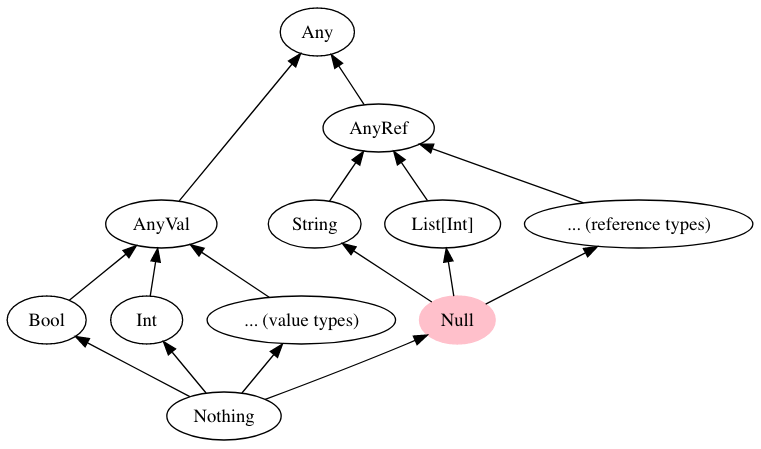 The new type system is unsound with respect to null. This means there are still instances where an expressions has a non-nullable type like String, but its value is null.

The unsoundness happens because uninitialized fields in a class start out as null:

Enforcing sound initialization is a non-goal of this proposal. However, once we have a type system where nullability is explicit, we can use a sound initialization scheme like the one proposed by @liufengyun and @biboudis in lampepfl/dotty#4543 to eliminate this particular source of unsoundness.

Because of the unsoundness, we need to allow comparisons of the form x == null or x != null even when x has a non-nullable reference type (but not a value type). This is so we have an "escape hatch" for when we know x is nullable even when the type says it shouldn't be.

Recall that Null is now a direct subtype of Any, as opposed to AnyRef. However, we also need to allow reference equality comparisons:

We implement this by moving the eq and ne methods out of AnyRef and into a new trait RefEq that is extended by both AnyRef and Null:

To make working with nullable values easier, we propose adding a few utilities to the standard library. So far, we have found the following useful:

The compiler can load Java classes in two ways: from source or from bytecode. In either case, when a Java class is loaded, we "patch" the type of its members to reflect that Java types remain implicitly nullable.

We do the patching with a "nullification" function nf on types:

JavaNull is an alias for Null with magic properties (see below). We illustrate the rules for nf below with examples.

To enable method chaining on Java-returned values, we have a special JavaNull alias

Here, all of trim, substring and toLowerCase return a String|JavaNull. The Typer notices the JavaNull and allows the member selection to go through. However, if someJavaMethod were to return null, then the first member selection would throw a NPE.

Without JavaNull, the chaining becomes too cumbersome

JavaNull is also special in a few other ways

Our nullification function is sometimes too conservative. For example, consider the trim method in java.lang.String:

A vanilla application of nullification will turn the above into def trim(): String|JavaNull. However, inspecting the function contract in the javadoc reveals that if s is a non-null string to begin with, then s.trim() should in fact never return null (if s is null, then s.trim() should throw). From the point of view of Scala it is then preferable to have a more precise signature for trim where the return type is String.

In general, this is a problem for many methods in the Java standard library: in particular, methods in commonly-used classes like String and Class. We address this by maintaining a whitelist of methods that need "special" treatment during nullification (e.g. nullify only the arguments, or only the return type).

Currently, the whitelist is hard-coded in Dotty, but the plan is to use an annotated version of the Java JDK with nullability annotations produced by the Checker Framework (hat tip to @liufengyun and Werner Dietl for suggesting this).

The toString method is a special case where we chose to trade away soundness for precision and usability. toString is special because even though it lives in scala.Any, it actually comes from java.lang.Object and it could, in principle, be overriden to return null.

However, changing toString's signature to return String|JavaNull would break too much existing Scala code. Additionally, our assumption is that toString is unlikely to return null.

This means the signature of toString remains def toString(): String.

Our strategy for binary compatibility with Scala binaries that predate explicit nulls is to leave the types unchanged and be compatible but unsound.

Concretely, the problem is how to interpret the return type of foo below

There are two options:

The first option is unsound. The second option matches how we handle Java methods.

However, this approach is too-conservative in the presence of generics

If we instantiate Old[T] with a value type, then id now returns a nullable value, even though it shouldn't:

So really the options are between being unsound and being too conservative. The unsoundness only kicks in if the Scala code being used returns a null value. We hypothesize that null is used infrequently in Scala libraries, so we go with the first option.

If a using an unported Scala library that produces null, the user can wrap the (hopefully rare) API in a type-safe wrapper:

If the offending API consumes null, then the user can cast the null literal to the right type (the cast will succeed, since at runtime Null is a subtype of any reference type).

We added a simple form of flow-sensitive type inference. The idea is that if p is a stable path, then we can know that p is non-null if it's "compared" with the null literal. This information can then be propagated to the then and else branches of an if-statement (among other places).

What exactly is considered a comparison for the purposes of the flow inference:

If p isn't stable, then inferring non-nullness is potentially unsound:

We also support type specialization within the condition, taking into account that && and || are short-circuiting:

Let NN(cond, true/false) be the set of paths (TermRefs in the compiler) that we can infer to be non-null if cond is true/false, respectively.

To type If(cond, then, else)

To propagate nullability facts within a condition, when typing A && B

Similarly, when typing A || B