Philosophy: Focusing on essentials for competitive raiding / mythic+ / pvp. alcaras#6052 on discord if you have suggestions for things to add. I'll also be updating https://subcreation.net/ for Season 2 of Mythic+ and PvP and for Sanctum of Domination by July 10th.

(you'll need to work your way up to layer 12; remember once you unlock layer 12 for one wing, it's automatically unlocked for the other -- not 100% clear what layers will be unlocked each week)

heroic and mythic week and beyond

(less relevant than in 9.0, but still useful to fill gearing gaps since you can buy for a specific non-domination/legendary slot and upgrade to 246 if you can hit 2100) 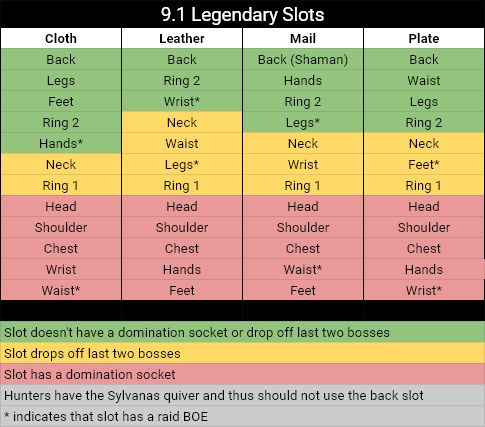 Thank you to @mcadamswow for the awesome graphic.

Note you'll need to collect Stygian Embers to upgrade your shards of domination. These drop from the Korthia weekly and from raid bosses.

Since you'll have at least 5 Shards of Domination, you'll eventually want at least 500 Stygian Embers to upgrade all of them.

You can remove Shards of Dominations from sockets using the Soulfire Chisel (reusable, costs 2,500 Stygia).