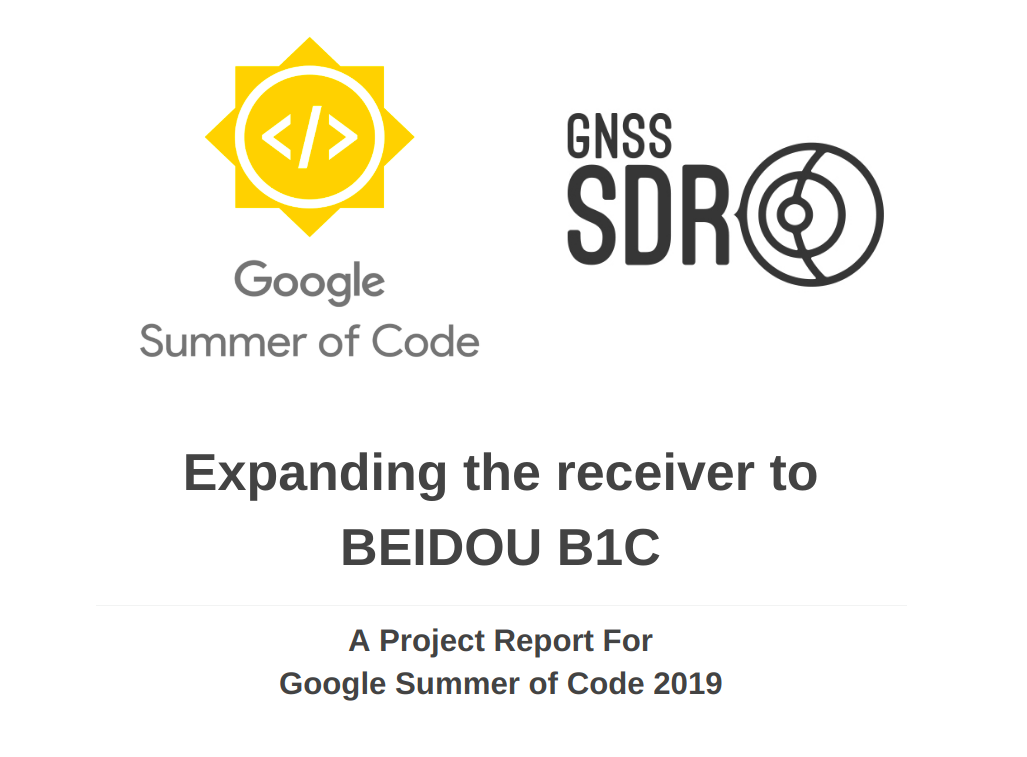 This document provides a descrption of the work developed for GNSS-SDR during the Google Summer of Code 2019 program. This project intended to extend the capabilities of the GNSS-SDR software by providing implementation of BEIDOU B1C signals.

The primary goal of this project was to make the software receiver compatible with the BEIDOU B1C signals. This project helps to increase the number of signals capable of being processed by the GNSS-SDR software. This project’s objectives were:

Given the project complexity and length, for the original project idea proposed here the following milestones were set:

The work developed during the summer and described subsequently

Code developed during the summer will be integrated into GNSS-SDR as a single pull request. For the inspection of the code, the reader is referred to the development branch of the project called bds_b1c. This branch is still under heavy development until all the tasks in the Future Work list presented below are completed.

The most significant commits in this project are highlighted below:

The current version of GNSS-SDR supports GPS, GALILEO, GLONASS and BeiDou Global Navigation Satellite System signals. Right now in BeiDou signals, GNSS-SDR fully supports BeiDou B1l and BeiDou B3I. To go towards an effective multi-constellation software defined receiver, GNSS-SDR extension to the Chinese Navigation Satellite System (BeiDou) was proposed. Hence, the aim of this project was to implement a signal generator, an acquisition block, a signal tracking block and a telemetry decoding block for BeiDou open service signals (B1C) in the framework of the GNSS-SDR project.

The following implementation of a GNSS receiver working with BEIDOU B1C signals was proposed in the beginning of the project. It is a Unified Modeling Language (UML) diagram which represents how blocks of code should be created, modified and added in GNSS-SDR architecture for BEIDOU B1C signal. It describes the object-oriented properties relationship with the core blocks of the GNSS receiver. So as per the initial milestones discussed with the mentor, the following blocks highlighted with thick black border were developed during GSoC period. 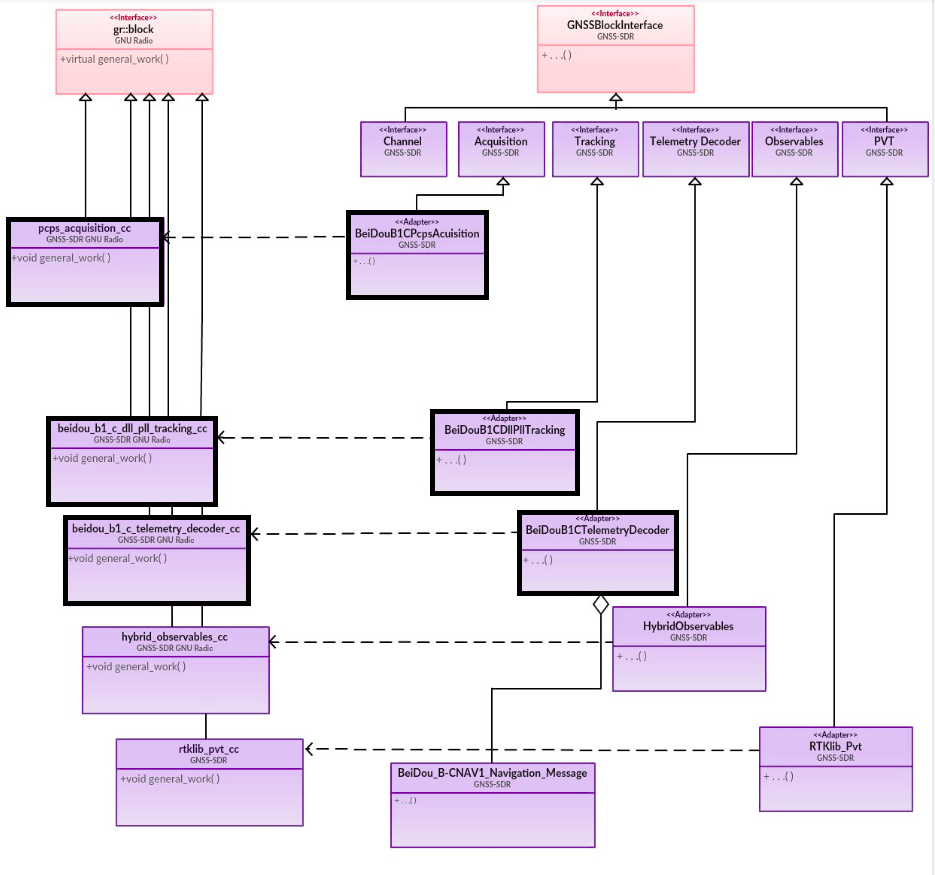 The initial state of a GNSS receiver is an acquisition. The signals from the GNSS satellites generally consist of three parts: the carrier, the pseudo-random noise codes and the data bits. Some signals, for example, BEIDOU B2a and BEIDOU B1C among others also contain two signals transmitted 90 degrees out of phase from each other, in addition to also containing a secondary code. The signals are received at a very low signal to noise ratio, actually below the noise floor. In order to acquire the signals, the pseudo-random noise (PRN) codes and the carrier frequencies are used. Both the PRN codes and the carrier frequencies have to be aligned to find the signal. Each satellite has its own PRN code which is used for identification. The receiver generates a replica of the PRN code, shifting through all 10230 chips of the code, for each PRN to find out what signals are available. The second search space is the carrier frequency, which has a Doppler shift applied to it. In a cold start, all possible Doppler shifts are required to check for in order to find the signal. GNSS-SDR already has a generic acquisition algorithm utilizing Fast Fourier transforms (FFT) for the delay space, which means that the bulk of this project is to implement the codes for BEIDOU B1C such that they can be used as an input for the existing acquisition algorithm.

After the available signals have been found, the next step is to maintain track of them. Since the satellites move with some speed over the sky, the Doppler frequency, as well as the code frequency, will change over time. The GNSS-SDR tracking algorithm utilizes a Delay Locked Loop (DLL) for tracking the PRN code, and a Phase Locked Loop (PLL) to track the carrier frequency.

After the tracking code is locked, the Telemetry Decoder block used to obtain the data bits from the B-CNAV1 navigation message of the BEIDOU B1C signal.

The B-CNAV1 navigation message is broadcast on the B1C signal. More specifically, the B-CNAV1 message data are modulated on the B1C data component. Each frame has a length of 1800 symbols, and its symbol rate is 100 symbols per second, so the transmission of one frame lasts for 18 seconds. The basic frame structure of B-CNAV1 is shown in the figure below.

The CNAV1 navigation message parameters which are added are briefly explained below:

Over the course of Google Summer of Code 2019, we have made several developments for Expanding the receiver GNSS-SDR to BEIDOU B1C. As per the initial milestones, the code of all the decided modules is developed.

The acquisition and tracking modules that were developed by following the BEIDOU B2a model was functional but the results obtained were not conclusive. After this by following the Galileo model acquisition code is developed. But in it also Galileo has the conventional signal structure with a pilot code in only one component. But BEIDOU B1C has a complex signal structure where pilot signal which having components on both real and imaginary part. So discussing with mentor more changes were made, the function for generating a complex signal is developed and it can be seen here. The signal generation of Data and Pilot signal (both primary as well as secondary code)ranging code generation is fully developed and tested along with its BOC implementations.

The tracking module here is also fully developed by following the approach like Galileo E5a and secondary pilot code has been generated offline and stored as strings in the “BEIDOU_B1Cp_SECONDARY_CODE” array in the system parameters. These two modules are required to be tested exhaustively. Here more testing is needed with the convenient i.e higher power data set.

Due to hardware and processing limitations in the testing phase, the code development was lagging so by discussing with the mentor it is decided to develop the code of the subsequent module i.e Telemetry Decoding with its full implementation.

All the parameters, unit conversions and user algorithms of the BEIDOU CNAV1 message are successfully developed here. The Telemetry decoding block is developed by following the different strategy as explained previously here. But for unit testing of the telemetry parameter data the appropriate message string was not available. So finding the appropriate CNAV1 message string and unit testing will be the future work.

The code is in its final stages according to initially decided milestones. Nevertheless, though as the report shows, the ultimate goal of this project, testing the acquisition, tracking, telemetry decoding modules with real-world GNSS data, were not fully accomplished, however, significant progress has been made toward that goal through innovative and experimental design, modeling, and implementation, and it is our firm belief that with a bit more effort, completion of that final goal is well within reach. The Acquisition, Tracking and Telemetry Decoding blocks are developed and are quite close to great results.

This was an amazing experience to participate in the Google Summer of Code 2019. I would like to thank my mentors Mr. Damian Miralles and Mr. Luis Esteve who guided me throughout this GSoC work period, providing me support and feedback. The valuable guidance I got from the project mentors helped me a lot to clear my concepts regarding the project and to familiarize myself with the codebase. The excellent and precise documentation of the GNSS-SDR organization helped me a lot to familiarize myself with the organization as well as with the software. This experience truly helped me to become a real-world software developer. GSoC allowed me to realize the true potential of spreading and sharing knowledge with the whole world. I will try my best in the future to work on subsequent modules so that the receiver will be fully functional with BEIDOU B1C signals and will be open for public use.