What is included in this blog:

Go Modules is an experimental opt-in feature in Go 1.11 with the plan of finalizing feature for Go 1.13. The definition of a Go module from this proposal is "a group of packages that share a common prefix, the module path, and are versioned together as a single unit". It is designed for resolving dependency hell problems in Go, like conflicting dependencies and diamond dependency.

Here is an example of Go Modules:

As shown in the picture, the my-repo repository has two modules bar and mixi. Take the bar module as an example, it contains two packages: the bar package and the foo package. The go.mod file under the path/to/my-repo/bar directory defines the module's path and its dependencies:

The go.mod file bundles the bar package and the foo package together as a unit. For example, the import statement in the following code will import the module path/to/my-repo/bar (which includes the foo package) rather than the package path/to/my-repo/bar/foo when Go Modules is enabled. Even though the code looks the same, the path in the import statement is recognized as the module path, not the package path, once Go Modules is used

How to Enable Go Modules

In order to use Go Modules, you need to upgrade your Go to v1.11 or any later version and set the environment variable export GO111MODULE=on.

When to Use Go Modules

The major purpose of Go Modules is to let one or more packages be versioned, released and retrieved together as a single unit. Therefore, the public packages, for example, Go libraries and SDKs, are major targets of Go Modules as they need to be published properly for public use. You do not need to convert internal packages or any internal-used-only packages within a microservice repository to Go modules. These packages can directly import and use modules once Go Modules feature is enabled, even if they are not converted to modules.

Semantic Import Versioning is a method proposed for adopting Semantic Versioning in Go packages and modules. The idea behind it is embedding the major version (say v2) in the package path (for packages) or the module path (for modules) with the following rules:

The following picture demonstrates the rules above: 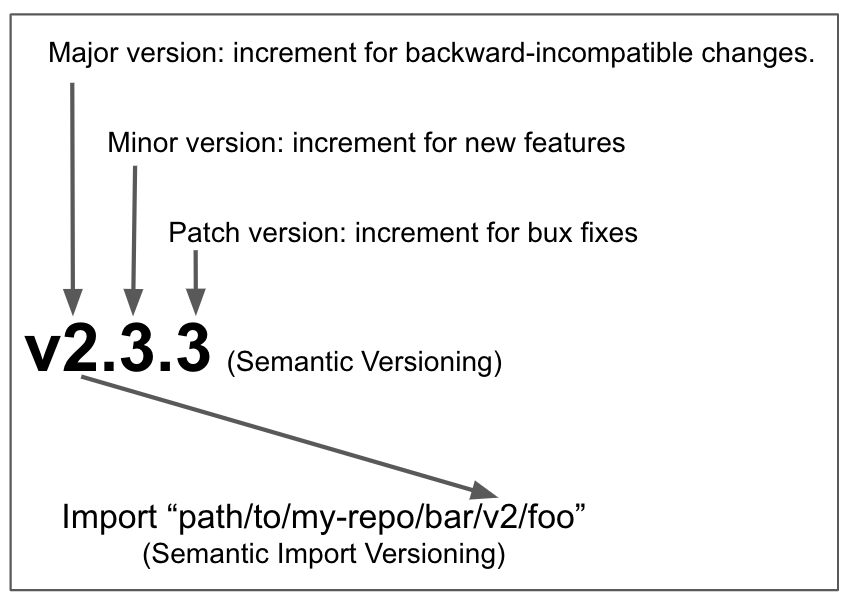 With Go Modules and Semantic Import Versioning, you can release your modules by creating git tags. A tag corresponds to a version. For example, the following git command releases the bar module v2.3.3:

You can read my last blog for more details about how to releases modules with Semantic Import Versioning.

All in all, Go Modules provides a way to group one or more packages as a single retrievable unit, while Semantic Import Versioning is a method for applying Semantic Versioning in Go packages and modules to make them versioned. These two things are designed for breaking a repository into multiple retrievable units (modules), so that Go can grab dependencies at the module granularity rather than the repository granularity.

I wrote a dummy package called module for demonstrating how to convert one or more Go packages to a Go module.

It is very easy to convert one or more Go packages to a Go module. Take the module package as an example, here are the steps of converting it to a Go module:

Here are the contents of the go.mod file automatically generated by Go. You can see that it defines the module's path, glues anything under the path/to/example/module directory as a single unit and lists all of its dependencies.

Go utilizes the following roles to grab the module's dependencies:

1. It grabs the latest version for the packages that have been converted to modules. For example, rsc.io/quote v1.5.2.

A module can only be used as a module after it is released. A module is released by creating git tags and each tag corresponds to a version. However, there are two problems we need to solve before releasing a module.

The first problem is how to release v2 or higher Major versions. Go utilizes two methods, Major Branch and Major Subdirectory, which are provided by this proposal to solve this problem. My last blog demonstrates these two methods and compare their advantages and disadvantages. In this blog, Major Subdirectory is used for all the examples as it does not require to duplicate any code.

The second problem is we need to figure out whether to consider the conversion from Go package(s) to a Go module a breaking change or not. If so, we need to upgrade the Major version using Semantic Versioning. If not, we need to decide what versions we need to release. I prefer to just release the latest version of the package(s) listed in the CHANGELOG.md file for the following reasons:

Now let us come back to the module example and release its latest version. Here is what I did:

You can still use this package, without Go Modules enabled, by using some Go dependency management tool (e.g. dep) with the following specification. This will grab the whole repository which includes the module module for your build.

With Go Modules, what you need to do is import and use the module in your Go program and run go build. It will automatically grab the golang/go_modules/example/module/v2.0.1 module other than the whole repository for your build.

Let us see what will happen if we convert libc first:

The cause of this ambiguous import problem is Go grabs the whole repository github.com/azhuox/blogs v0.0.0-20190330175117-09a7dbd4a3ce to get the liba and libb package for satisfying the dependencies of the libc module. However, github.com/azhuox/blogs v0.0.0-20190330175117-09a7dbd4a3ce also includes a copy of the libc package, which confuses the Go compiler. To fix this, we need to convert the liba and libb package to Go modules and release them, so that they can be retrieved and parsed properly as two individual modules by Go.

Now let us convert these three libs in a correct order.

Convert the liba package to a module:

convert the libb package to a module:

Convert the libc package to a module:

You can see the libc package is converted to a module correctly and it can retrieve the liba and libb modules in its build without any problem.

I wrote a dummy micro-service for demonstrating how to utilize Go Modules in a microservice. Here is its project layout:

I want to mention that the internal/pkgb package is using libc package that we just converted to a Go module above. In this case, libc is retrieved together with liba and libb from the github.com/azhuox/blogs repository when Go Modules is not enabled. But it is retrieved individually as a single unit when Go Modules is enabled.

From the project layout, you can also see that the microservice is built as a docker image with the following Dockerfile:

As mentioned in the When to Use Go Modules section, only public packages need to be converted to modules. In this case, the sdks/go package is the only package that gets publicly used. Therefore, we only need to convert this package to a module and releases its latest version:

Utilizing Go Modules in the Microservice

Go Modules in this case refers to the new Go package management tool called vgo which is integrated in go tools like go get and go mod. The following steps demonstrate how to use it to manage the dependencies for the microservice:

Now we successfully replace the old dependency management tool with Go Modules. However, there are two cases we need to deal with in the Continuous Integration (CI) process: with vendor or without vendor.

Without vendors means utilizing Go Modules to dynamically grab dependencies when building docker images during the CI process. In order to do this, we need to do the following steps:

Update A Dependency in the vendor Directory

Suppose we want to build docker images with the vendor directory and use the latest version of libc (say v1.5.0) in the microservice. The following steps demonstrates the update process:

This may not work when the microservice is not using any new feature released after the current version of libc (v1.0.0 in this case). To force update it, we need to add a replace statement in the go.mod file and then run go mod vendor: