There are over 600 million right-to-left (RTL) language speakers worldwide. I'm just letting everyone know that a lot of people are affected by not providing proper RTL support.

Let's start with the basics, to make sure that we don't have any misunderstanding of how RTL languages work.

Letters, numbers and everything in English, starts from the left and goes to the right. That's why it's called LTR(Left To Right).

A part in English(LTR) and a part in Farsi(RTL) - For example in a .md file:

Numbers are simple, so let's start with them. Look at the example below, you can read both of them, right? You may even think they are the same but the second one has a silly font. RTL numbers are the same as the LTR numbers. The only difference is that their alignment will be right if they are being used with an RTL letter/word or inside an RTL sentence. Note that only the alignment will change, not the order of the numbers or anything like that. Even if the alignment of the numbers is equal to right, they are still going to be read from left-to-right.

As I explained earlier, numbers are always written and readen from left-to-right (just like English. dir=ltr). But if you are combining numbers with letters (example: I'm 70 years old), since the letters are written and read from right-to-left, you need to align numbers on the right side with the letters.

Numbers and letters all in English:

Numbers in Farsi and letters in English - (it's the same as the above example):

Numbers in English and letters in Farsi - (compare it with the screenshot above):

Numbers and letters all in Farsi - (compare it with the screenshot above): 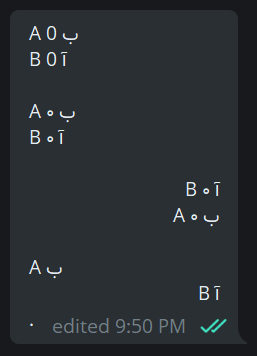 Compare this with the screenshot above:

Sometimes in a primarily RTL document, if a sentence starts with something like this (LTR RTL...):

Then the sentence still should be aligned to the right! I know, I said when the first letter is in LTR, then the whole sentence should left-aligned, but in this scenario, since the sentence is primarily is in RTL, it should start from right to left. I don't know how it can grammatically be explained.

Because programing languages (example: .js) are writen in English, they need to be left aligned. There is also other files like .md, that we can write a documentation in Farsi(RTL) and a block of code(LTR) inside it.

Here I'm going to show some incorrect RTL support with a corrected version.

This looks fine (Only Farsi):

Replace "بابک" with "babakfp" and as you see the result looks completely different.

Because it starts with an RTL letter, I gave it direction:rtl and because inside the code document any text needs to be left-aligned, I gate it text-align:left.

You can replicate it with pure HTML and CSS:

You can copy-paste the code in the dev tools (Elements tab) and test it there. If you remove display:inline-block, you will see it turs out to look like how vsCode displays the text, because then direction:rtl stops working.

Lets say you are writing a documentation in RTL in a .md file.

Well, You can also write HTML in .md files, shouldon't .md files primarily start from left to right? No.

We need a keyboard shortcut to be able to change the alignment of a text. This shortcut needs to be easy to use and remember, at the same time it shouldn't be accidentally clickable.

When RTL combined with LTR in a file

Look at how RTL works along with LTR in a file: