UPDATE 07/2018: I switched from Git Bash to MSYS2 recently which should be very similar, if not the same, but there some subtle differences which made me realize this is more tricky than I thought and that I don't 100% understand what is going on. If someone can help, please let me know in the comments.

Invoking docker in MSYS2 shell or Git Bash typically fails with complains about paths, for example:

Note how the Linux path is prepended with C:/Program Files/Git which obviously breaks some of the commands.

This happens because MSYS2 shells (which includes Git Bash) translate Linux paths to Windows paths whenever a native Windows binary is called. This is generally a good thing, making it possible to run e.g. notepad /c/some/file.txt from Git Bash.

But with Docker, you typically want Linux paths, or, actually, it depends. This simple example is already very tricky:

As a base for the workaround, create a small docker script (no extension) somewhere in your PATH, and make sure this script is higher-priority than the path of docker.exe. Docker is quite aggressive and puts itself very high in the list, the safest way is to become no. 1 system path (not user path) to beat it. Here is an example from my computer: 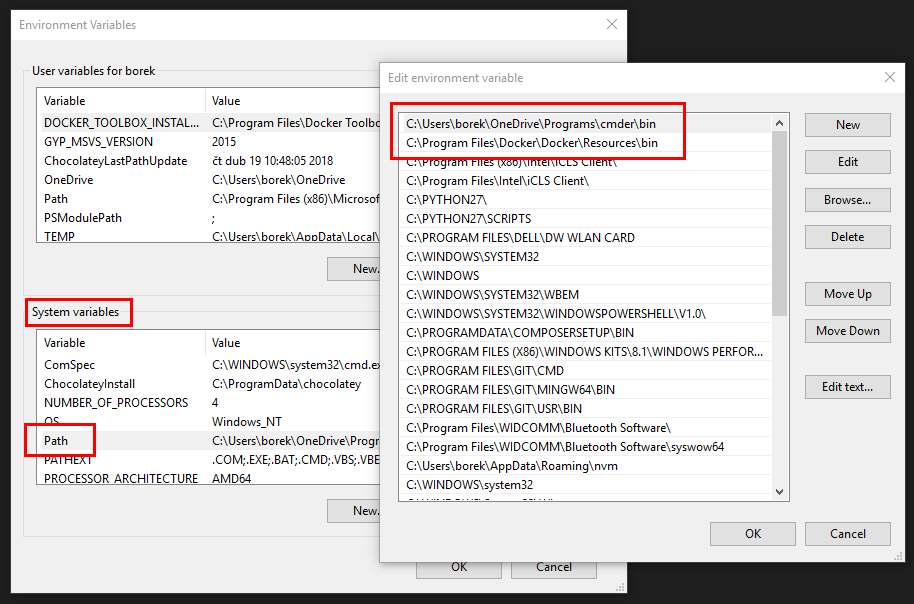 Your script must be first!

Now, put this into your script:

That should be it. Try running this:

Inside the container session, ls /tmp/mounted should list your local PWD directory.

If that doesn't work, you can try either the MSYS_NO_PATHCONV or MSYS2_ARG_CONV_EXCL environment variables. For example, I used this in the past:

However, I no longer seem to need it. I don't fully understand why.

For docker-compose, do the same.