Getting the Gist of GitHub Actions

GitHub Actions is a CI/CD service that runs on GitHub repos.

Example workflow with one job

Example workflow with a build matrix 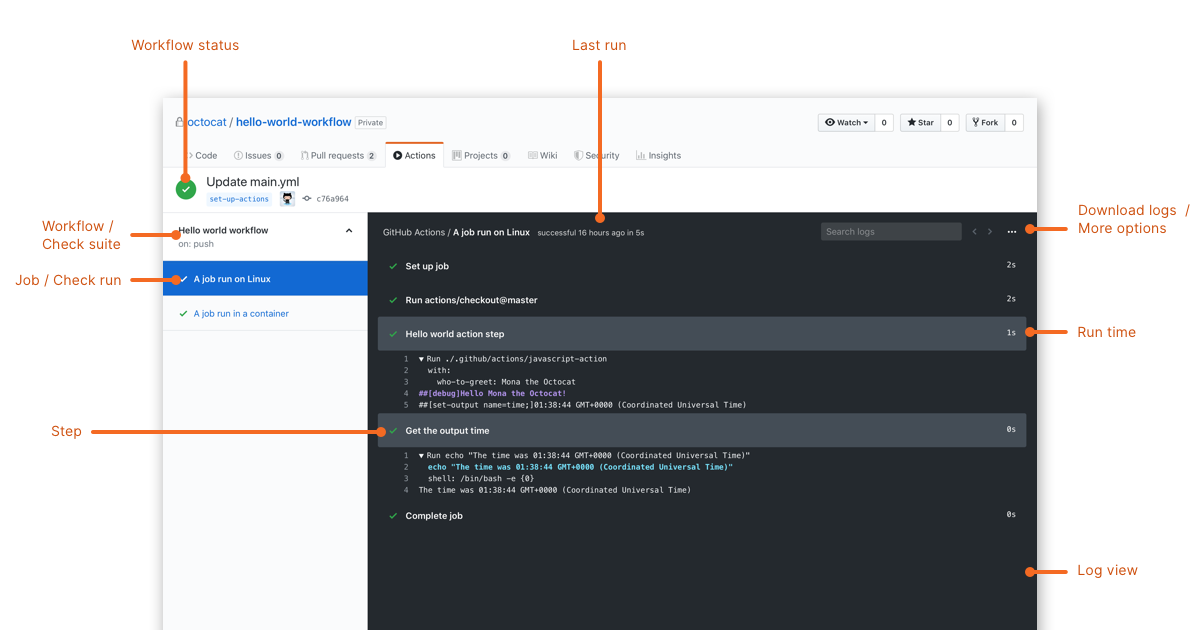 You can see a demo workflow in br3ndonland/algorithms.

Secrets is an encrypted parameter store (key:value store). The syntax is similar to environment variables.

GitHub Actions offers environments, which allow branch protection rules and secrets to be set individually for each environment (instead of for the repo as a whole). The way they've set up environments is a little confusing, and most of the functionality of environments can be implemented with other features like strategy.matrix or environment variables.

Let's look at a common use case that highlights the limitations of environments: deploying a service to multiple cloud regions. We'll use two environments that map to Git branches, and two cloud regions for each environment.

Poetry is a useful tool for Python packaging and dependency management. The following set of tips was originally posted to python-poetry/poetry#366.

Use caching to speed up workflows

Use actions/cache with a variation on their pip cache example to cache Poetry dependencies for faster installation.

Installing Poetry via pip can lead to dependency conflicts, and their "custom installer" script (get-poetry.py/install-poetry.py) has been problematic. Instead, Poetry can be installed with pipx. Versions of pipx and Poetry can be pinned to promote reproducible installations.

Build and publish in one step

That's why they call it Poetry. Beautiful.

Dependabot now offers automated version updates, with (preliminary) support for Poetry . If you have access to the Dependabot beta, set up .github/dependabot.yml as described in the docs:

Dependabot will now send you PRs when dependency updates are available. Although package-ecosystem must be set to pip, it will pick up the pyproject.toml and poetry.lock. Check the status of the repo at Insights -> Dependency graph -> Dependabot.

There's no PR merge trigger. To run a workflow when PRs are merged, use pull_request: types: [closed] as the event trigger and only run each job if the GitHub event payload contains merged == 'true'.

Furthermore, environment variables set to $GITHUB_ENV within a job are scoped to that job.

The solution is to use outputs instead of environment variables. Set outputs from one job and read them in downstream jobs. Note that step outputs must also be set as job outputs in order to be passed to other workflows.