Last active
Star
Download ZIP
The reasons why I am leaving the r/Jailbreak Discord community, and everything that came to this.
Raw
whyimleavingrjailbreak.md

I'm Burrito. You may know me from making AuthKit, AppDefense, Wander, or some other projects like my jailbreak guides. I'm one of the youngest people in the jailbreak community, and probably one of the youngest tool creators. Today, I would like to share some harsh experiences I've had, and why I am leaving the community.

For starters, I should mention that my experience only applies to the r/Jailbreak Discord community. Also, I should mention that you should read everything. There is no tl;dr, and the people who actually read the entire message with a serious mind would earn lots of respect and trust from me. I know this message will surface to r/Jailbreak's Discord, in one way or another, and I know people will skim over this, and I know that many people will not agree. I also know, in the terms of the r/Jailbreak Discord, that I will get a lot of "who the **** asked" and "who cares" jokes and comments. I also strongly know that the staff of the server will mock and meme this writing I made. I respect that. However, I'd like people to read this with an open mind, with my open feelings being written here.

I am not going to be posting this on r/Jailbreak's subreddit or Discord myself. Feel free to share it if you think they should read.

To start off, I should mention some great aspects of their community, since not everything is bad. I believe their support and "Genius Bar" channels are amazing, when it comes to needing quick, immediate help with jailbreaking. There is also some people in the community that are great to talk to, and I made nice friends as well as networked with a bunch of people. Those are some big points that I love about this community.

Where The Trail Is Cut Off 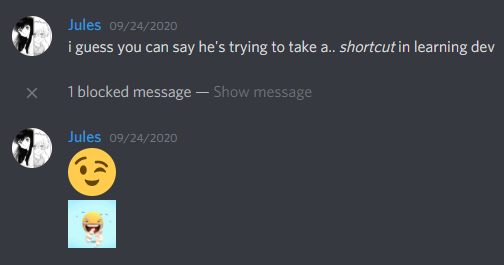 Please note that Rule 1 of the r/Jailbreak Discord is meant to protect this from happening. I have repeatedly asked Jules to stop, but he continues to harass me.

I was also using something known as "Canary replies". These look a little like this:

Apparently, these counted as spam under r/Jailbreak's rules. They were a native feature, accessible if you were apart of the test, or force enabled the test. This, combined with talking slightly off topic in the #jailbreak channel in the Discord, caused me to rack up 400 warnpoints in 1 hour and get kicked instantly. (Note, that off topic is against r/Jailbreak's rules, however, it is usually handled by warning the person to move to the correct channel like #general, and not excessive warnpoints.) 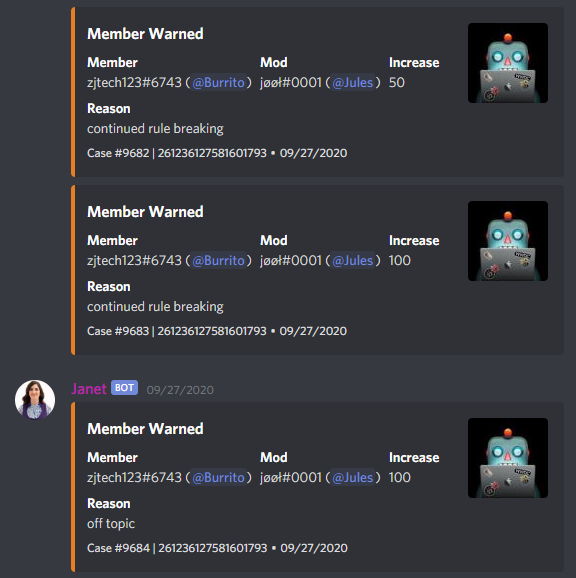 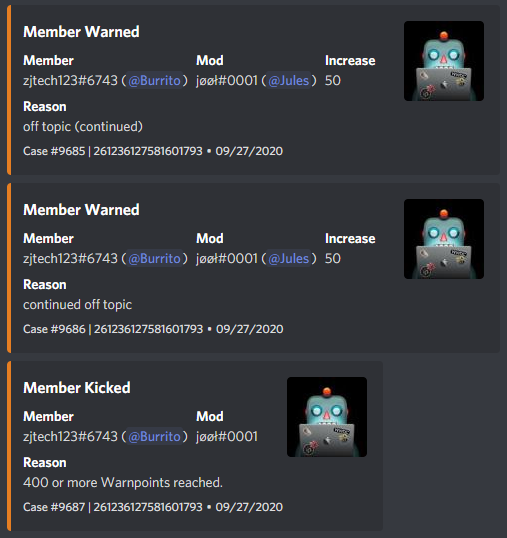 I unblocked Jules to try to come to a peaceful resolution, however I was led with this message.

This made me astonished at the lack of professionalism and communication the administrators of the server had. When wondering about infractions, people often ask for help from the people who it to them. A good friend of mine asked Jules about why this happened, since he didn't know what was happening. This was his response.

Again, I blocked him before, so I wasn't able to see the infractions racking up. He knows I blocked him, and he abuses this. What also really irks me is the fact that he says:

Because at this point I can assure you the community won't miss him, and that's just the truth.

Which, again, astonishes me about the lack of professionalism and communication skills. Those kinds of thoughts should be kept to yourself.

In the end, I got a resolution from Aaron, that half of my warnpoints were going to be removed. He also said that Jules would send a DM, "soon". 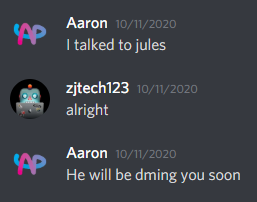 This DM took quite awhile. For days, I have been asking Jules while he was actively chatting in the Discord when he would send an apology. It took a total of 17 days, whcih is 2 weeks and 3 days, until he responded with this apology in the Sileo Discord.

This was further amplified by another administrator on the r/Jailbreak Discord, pinning the message.

Nowadays, when I step into the server, I get poked at. This time, it was from Aaron, telling Jules to go, as a joke. 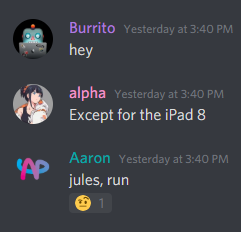 Steps I Am Taking

Also, if anyone on the r/Jailbreak staff is reading this and would like to apologize, I am open. I am optimistic that one day, the commmunity will reform and become a pleasant and strong community to express themselves with jailbreaking, and not to abuse and lie.

Not An Isolated Case

Many other people have had these issues. It's not just me. Here are other people seeing it. You can click on them to open their Tweets. 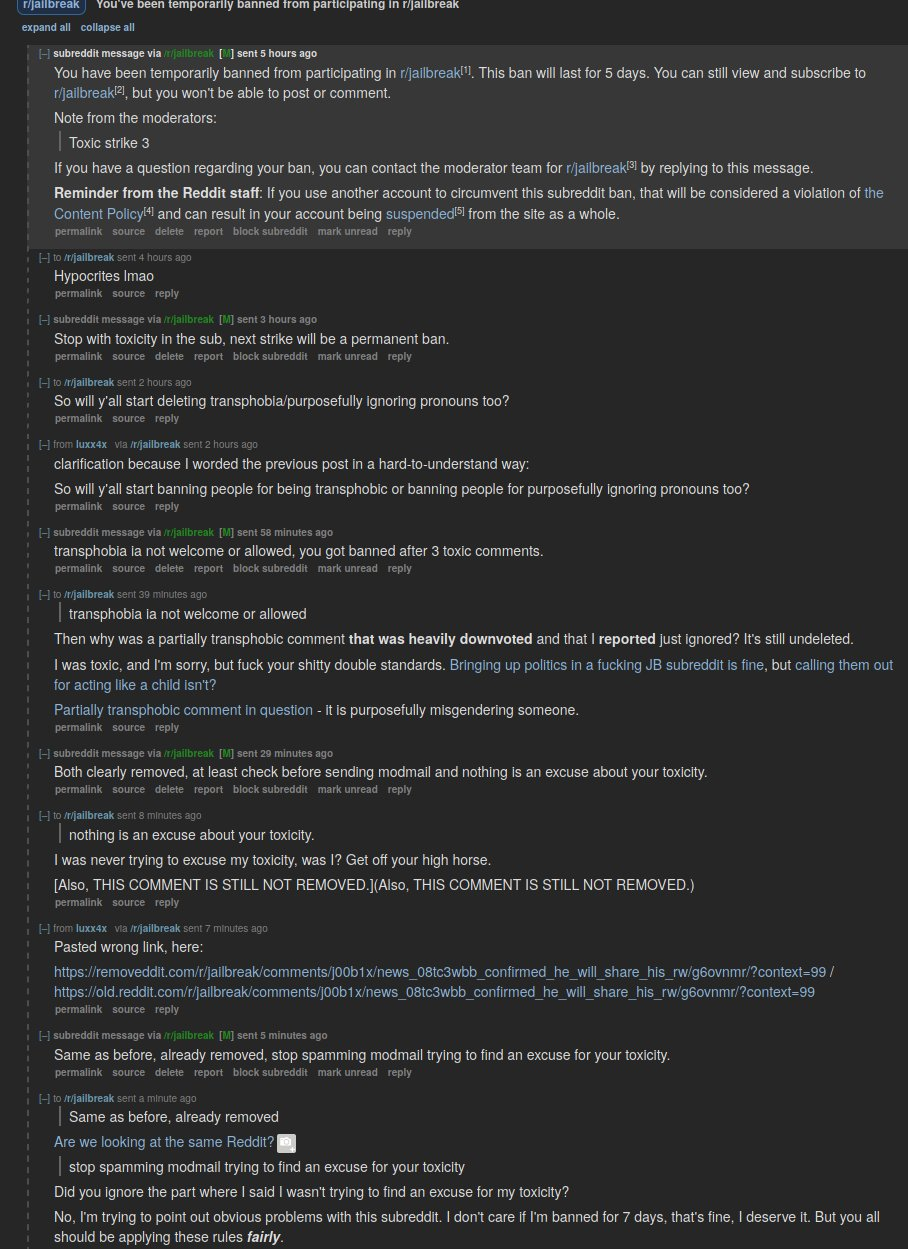 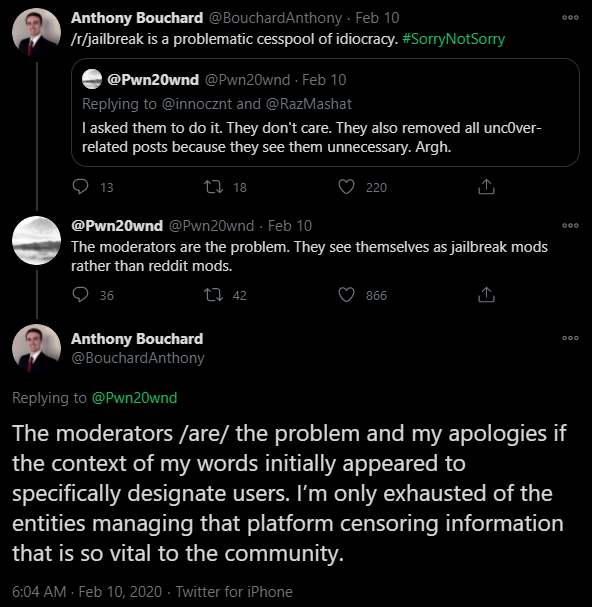 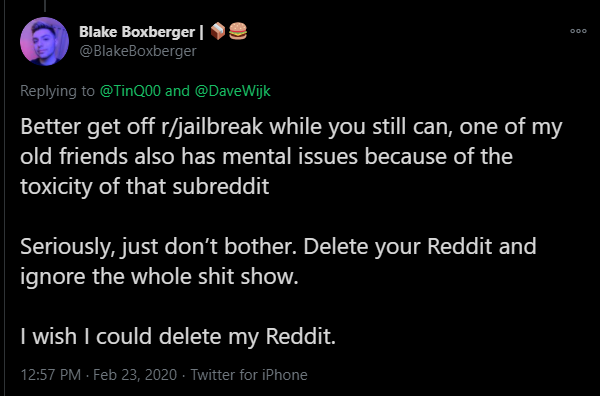 These experiences, and the experiences from other people, justified my action to leave and cut off interaction with their members. I hope that this informs you about the actual reality I have faced with them. You may not realize it now, but you will realize it eventually.

If you have a story similar to mine, please share it to me. Reach out to me on Twitter @BurritoSOFTWARE. Seems that server is not available, I'm now available on Quix's Jailbreak Discord. Unfortunately, this experience is happening to many, and isn't coming to light as much as it should be.

With love, not hate. - Burrito