This guide provides information on how to capture FFT data using the strf toolset, process it to look for satellite signals, and finally compare their doppler shift against TLEs from the SpaceTrack database. This can help with resolving the 'TLE lottery' after new launches, or cataloguing transmissions from spacecraft already in orbit.

It should be noted that the analysis described in this document is but a small subset of what the strf tools are capable of! Scott Tilley has a post describing some of the history behind strf and giving a crash course on the relationship between orbital dynamics and the doppler effect here: https://skyriddles.wordpress.com/2019/01/04/basic-orbital-dynamics/

The target platform is Debian-based distributions (e.g. Debian, Raspbian, Ubuntu), but should be applicable to other Linux-based platforms. The data processing software (rfplot and rffit) is also known to work fine under OSX (using Macports to supply the required dependencies).

Capturing STRF data on a RPi

This section assumes you are going to capture RF data using a Raspberry Pi (or some other machine), and an RTLSDR. A Raspberry Pi 3B+ or faster is recommended when capturing 2 MHz bandwidth data from a RTLSDR.

An Airspy R2 or Airspy Mini may be used, but note that you will need to be using a reasonably fast computer (e.g. not a RPi) to be able to process the data from these SDRs.

If you don't have a need to use the internal bias-tee option in some of the new RTLSDRs (i.e. you are using a separately powered preamp), then you can just install rtl-sdr from your system package manager using:

However, if you wish to use the bias-tee option in the newer RTL-SDR Blog v3 dongles, we need to use rtlsdrblog's fork of the rtl-sdr libraries to provide the rtl_biast utility. This is even the case with the latest release of rtl-sdr (v6.x) which while supporting the bias-tee in rtl_fm, still doesn't support it in the rtl_sdr capture utility. Go figure. Until this is fixed, we have to compile our own version.

IMPORTANT NOTE: Make sure to remove any installations of rtl-sdr already on your system before compiling/installing from source. (i.e. sudo apt-get remove rtl-sdr librtlsdr0 librtlsdr-dev

Once you are sure there are no system rtl-sdr libraries installed, run:

Confirm you can communicate with your rtl-sdr by running:

You will then need to edit this script to adjust the GAIN, WORKINGDIR and BIAS variables as appropriate for your configuration. You can check what gain values your RTLSDR supports by running rtl_test.

From within the ~/satobs directory, you can now start a data capture by running the rtl_capture.sh script:

The first argument is the centre frequency of the capture, in Hz, with scientific notation accepted. The second argument is the time to capture for. Values can be suffixed with 's' (seconds), 'h' (hours) or 'd' (days). I usually run this script within a screen session, so I can close the terminal window without affecting the running capture.

Data will be saved to files within the ~/satobs/data directory, as files ending in .bin.

Once the capture is finished, you will likely want to copy the data to a faster machine for processing, which can be accomplished using the Secure Copy (scp) utility.

Setting up the STRF GUI Utils

To process the captured data, we will be using two utilities from the strf repository:

It is recommended that this software not be run on a RPi. I am unsure if it will even work, as Raspbian supplies giza instead of pgplot5, so the GUIs may not work.

Build all the strf utilities:

Other Setup Tasks - Setting up a COSPAR ID

Edit the ~/strf/data/sites.txt file, and create a new entry for your location. For example, my entry is:

If you are going to be sharing data with other observers, you may wish to submit a pull request to the strf repository adding your entry.

To be able to download the SpaceTrack TLE catalog, you will need to create an account at: https://www.space-track.org/auth/login The password is going to be stored in a plaintext file, so make sure it's unique!

You will need to add the following lines to your ~/.bashrc or ~/.profile file:

Replace the ST_COSPAR ID number with the number you selected above, and add in your SpaceTrack login and password.

You should now be able to enter the strf directory and download the latest TLE catalog by running:

Remember: You will need to re-download TLE data before processing a new dataset. If you are archiving datasets, or mark data (more on this later), it is advisable to also archive the bulk.tle file along with the data, which is located at ~/strf/tle/bulk.tle.

To plot a set of data, run:

The -p argument is the 'prefix' of the set of captured data. rfplot will automatically find each file from that dataset. the -z option is a color scaling option, which has to be determined somewhat empirically. For RTLSDRs a value of 0.01 appears to be a good starting point. Run rfplot --help for information on other options.

After a while, all the data files will be processed, and a pgplot window will appear. It is recommended that you arrange your screen so that you can see both the pgplot display, and the terminal window from which it was run - you will need to be able to see both!

Navigation around the dataset is performed with a combination of mouse and keyboard commands. A few notes are as follows: 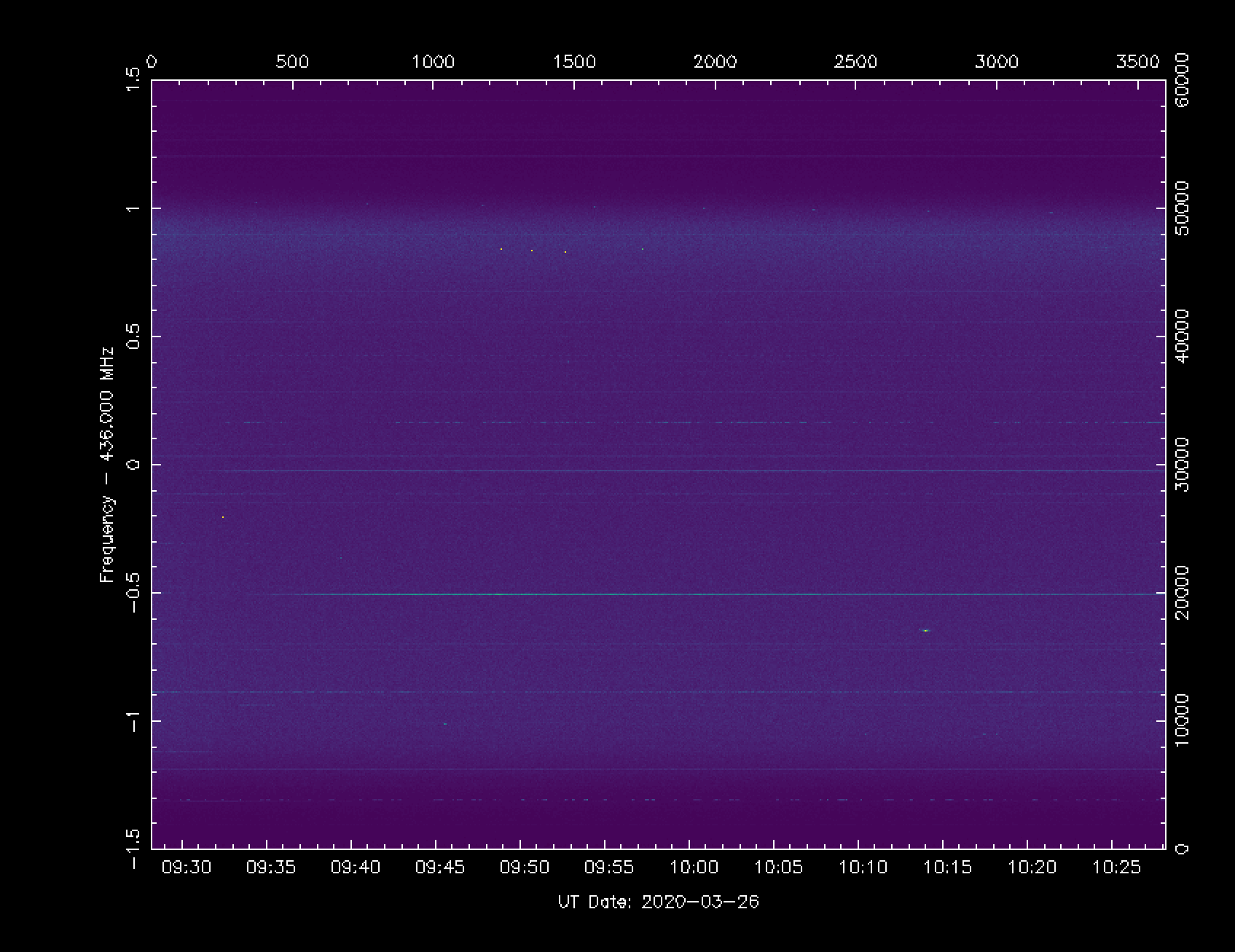 The above figure shows an example rfplot window, showing some data captured around 436 MHz. I picked the 'z' setting poorly, so to bring out more detail I hold down 'b' for a while until it looks like this: 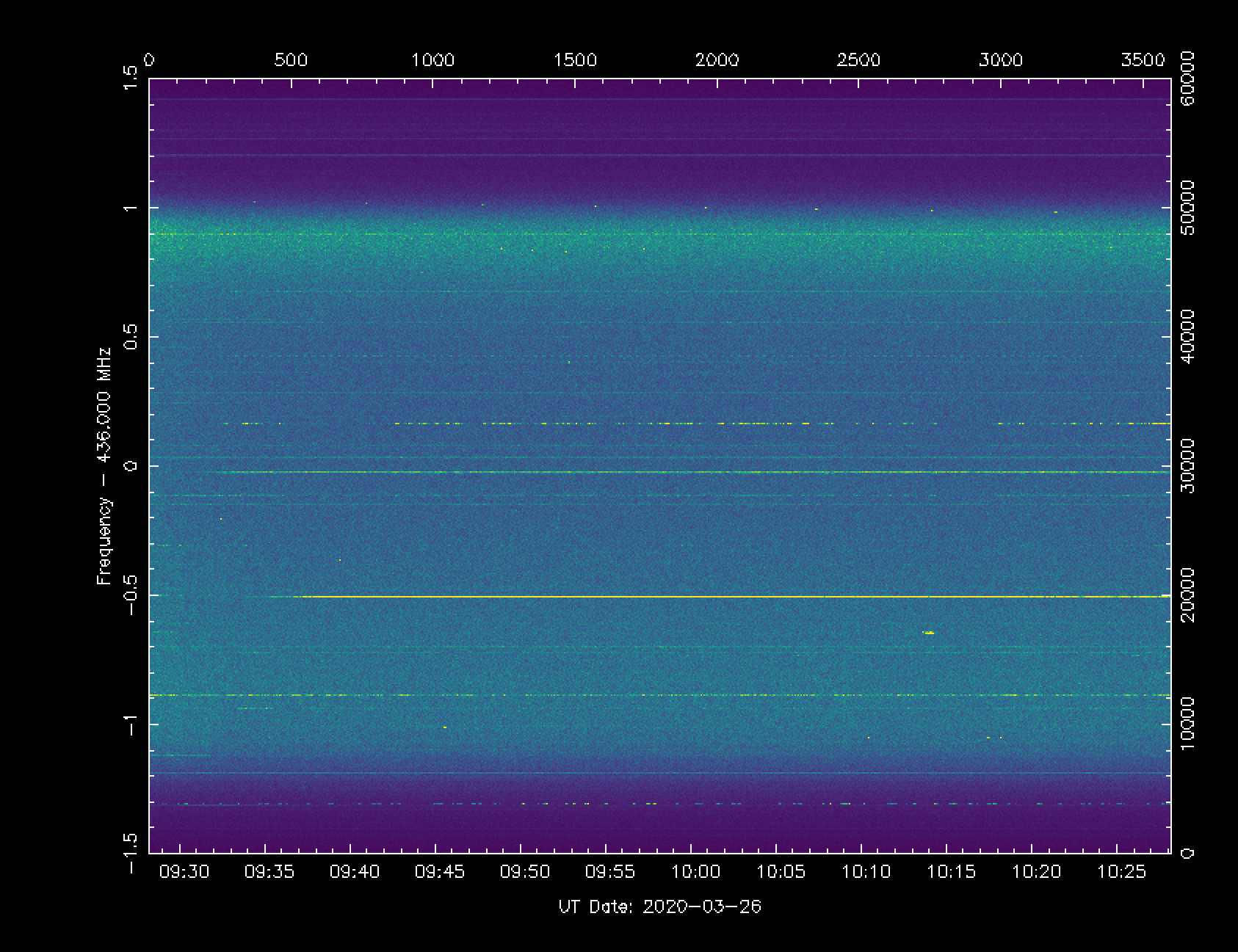 We can see from the scales on the plot that this display covers approximately 1 hour of time span, and 3 MHz of frequency span (it was captured using an Airspy Mini).

If we keep pressing the TAB key, we can pan through the dataset in time & frequency steps fairly well suited to looking for LEO objects. After panning through some of the dataset, I come across this signal: 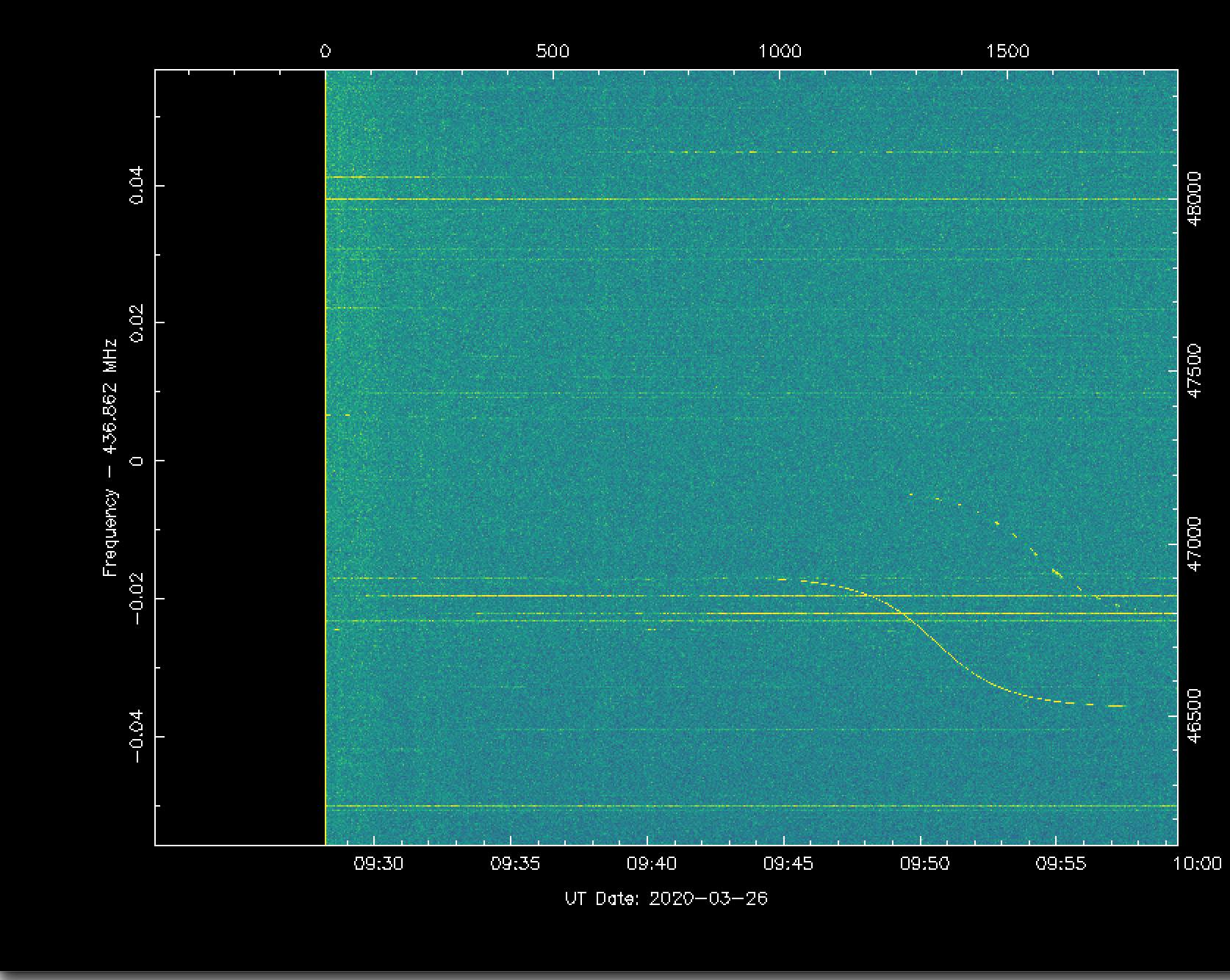 By pressing 'z' and selecting the area around the signal, we can centre it in the display: 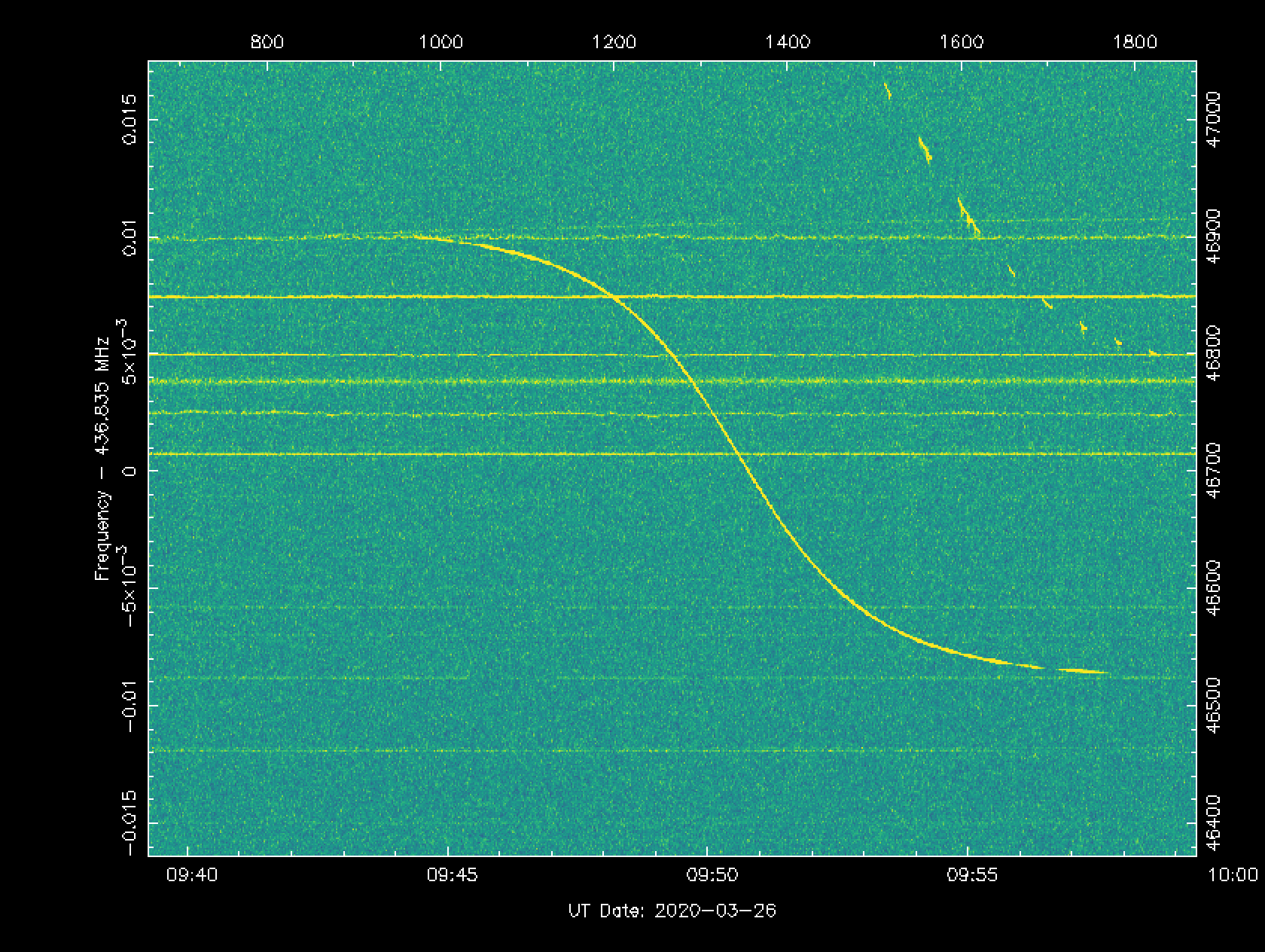 This is a pretty typical doppler curve from a LEO sat. To start on the process of identifying which satellite it is, we need to get a dataset of time/frequency points to use with the rffit utility. There are a few ways of doing this in rfplot, and I'm going to start with the most manual method, since it's more useful for wider bandwidth signals as we will see later on in this guide.

First of all, open up another terminal in your working directory (wherever you ran rfplot from), and make sure there is no mark.dat file by running: rm mark.dat.

Now, starting at the leftmost point of the doppler curve, hold the mouse cursor as precisely as you can over the signal, and press Shift+D (e.g. capital 'D'). Repeat this for a reasonable set of points over the entire signal. You should see the datapoints appear in the terminal you ran rfplot from as you do this, e.g.:

Each point consists of a timestamp (in julian format), a frequency, a power level, and your COSPAR id.

To exit rfplot, press 'q'. Note that the pgplot window will likely hang around will have to be closed manually.

Now, open yet another terminal, navigate to the same directory and run: 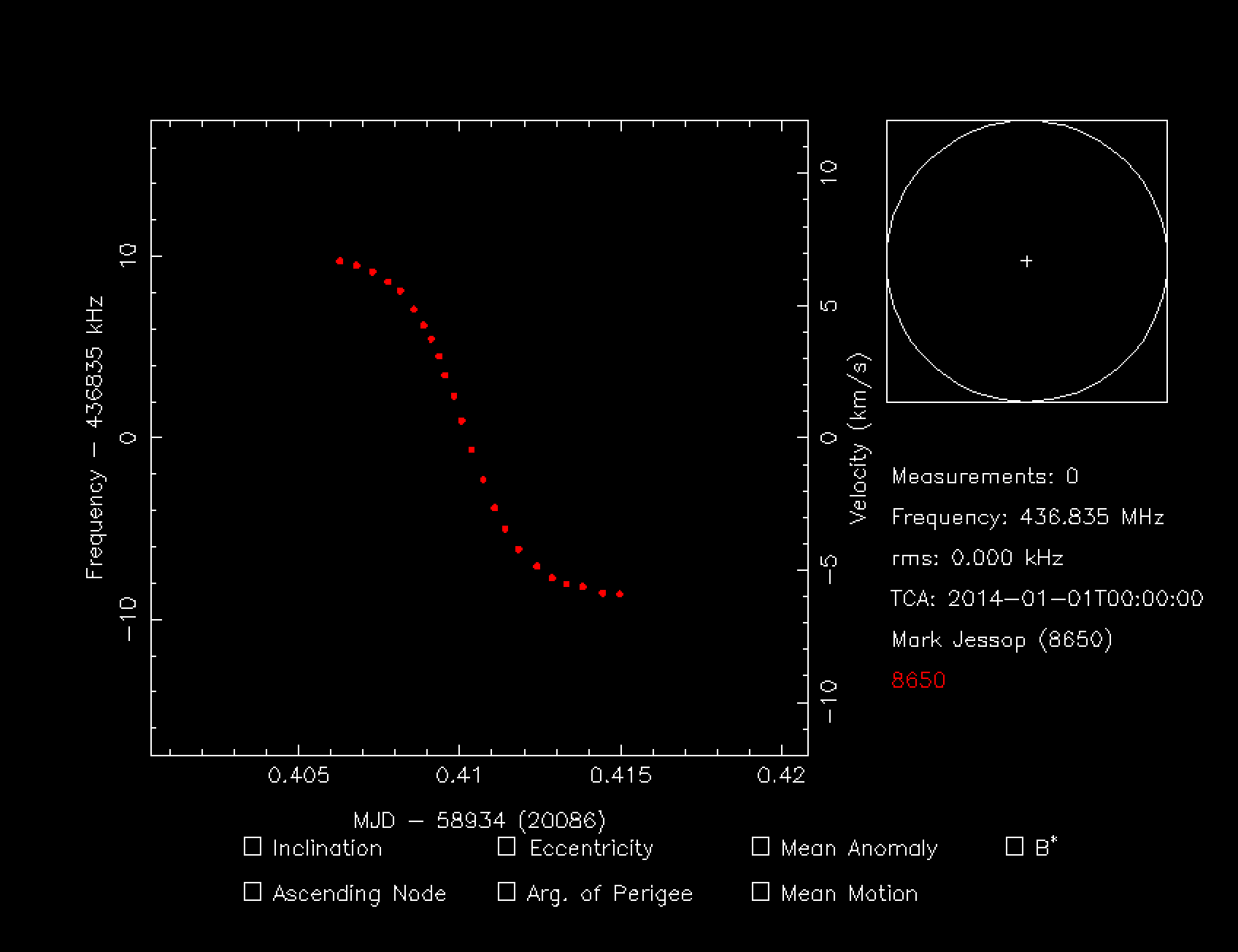 You should now be seeing something similar to the above. The red dots are the datapoints we marked out just before. On the right we can see the estimated centre frequency of the transmission. As with rfplot, you can press 'h' to display a list of keyboard commands in the associated terminal.

Now we can attempt to fit these points to the TLEs we have in our local catalog.

With mouse focus on the rffit window, press 's' to highlight all displayed points. Now press 'i'. In the terminal window you will be asked to enter a 'rms limit' in kHz. This is the limit on fit error. To start with, type in '0.5' (0.5 kHz) and press enter.

rffit will then attempt to fit the curve against all objects in the local TLE catalog which were visible at the time of the measurement. The results appear in the terminal, showing the object number, the fit quality (rms kHz), and the calculated centre frequency. The doppler curve for the best fitting TLE will be drawn on the rffit window automatically. Press 'f' to fit that TLE to the highlighted points: 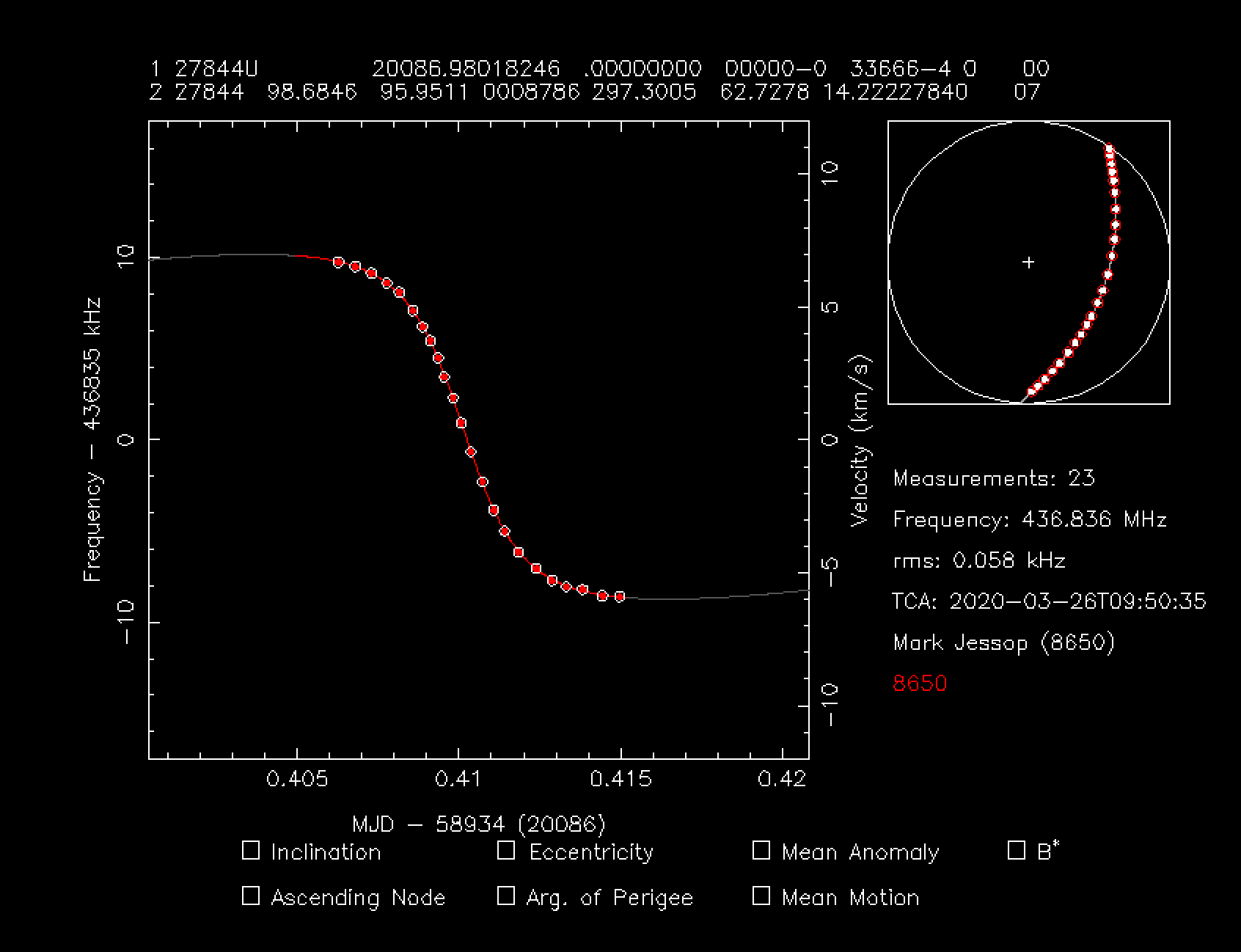 If you end up with multiple TLEs which fit closely, it's often worth checking on what those TLEs have been previously identified as, for example using n2yo.com (e.g. http://n2yo.com/satellite/?s=27844 ). Use some common sense as to what will be emitting on the frequency you have identified! (e.g. it's unlikely that rocket debris will be transmitting!)

To load a different TLE from the catalog, you can press 'g', and then type the object ID into the terminal. Again, press 'f' to fit the TLE to the highlighted points.

Once you are confident of an identification, press 'l' to log the object ID and the centre frequency to the $ST_TLEDIR/data/frequencies.txt file. The terminal will display something along the lines of:

If you go back to your rfplot window and press Shift-r (e.g. capital 'R'), you will now see a green trace overlaid on the plot, with the object ID number (you may need to adjust the dynamic range with 'v' and 'b' to better see it): 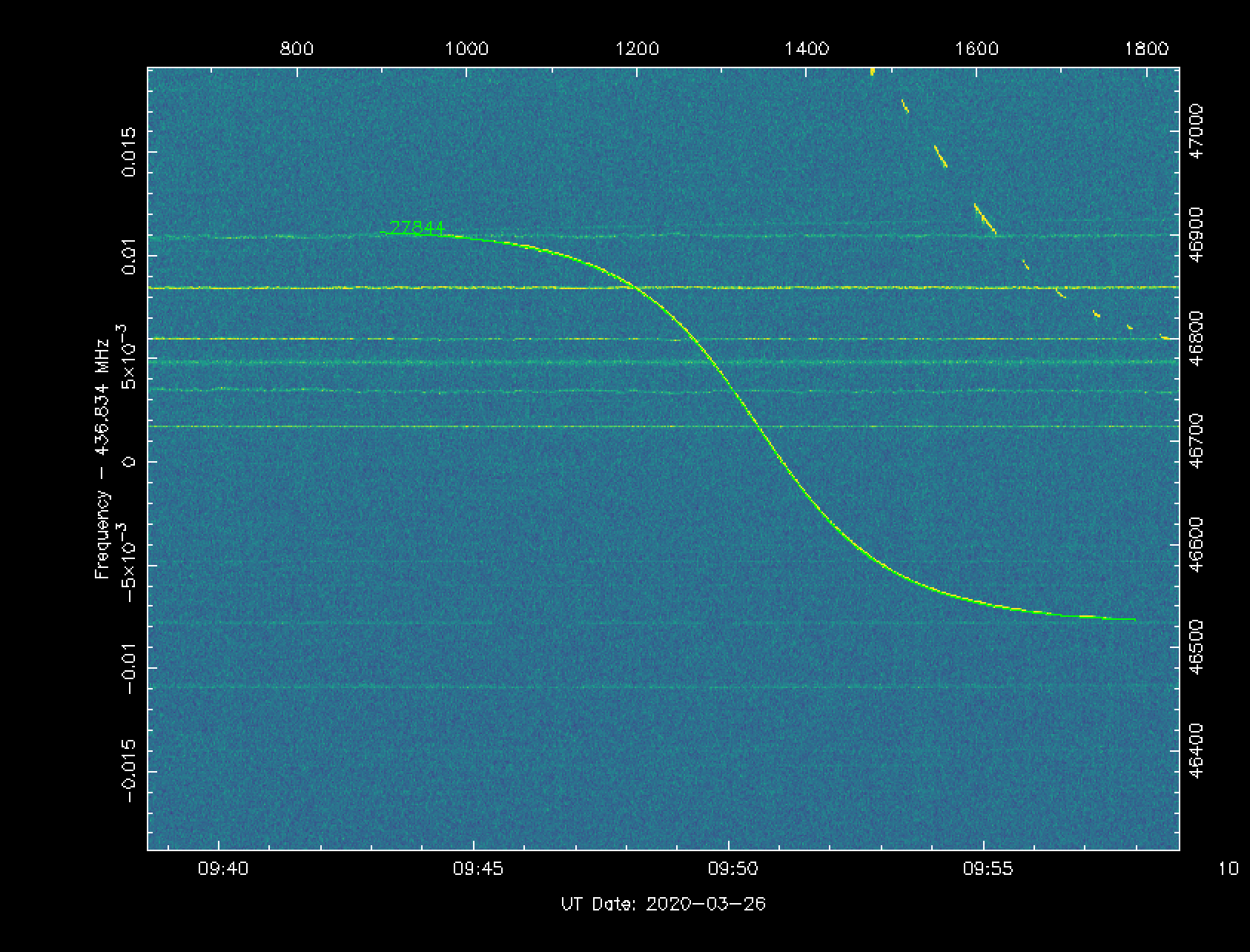 As you add more objects into your frequencies.txt list, you may find that the rfplot window lags a bit when changing dynamic range. You can toggle display of the overlays by press 'p' to speed things up.

Once you are done, you may wish to backup your Time/Frequency datapoints somewhere. Otherwise, make sure to delete mark.dat.

Not all satellite transmissions are going to be nice easy-to-mark CW signals. In most cases they will be modulated data packets, which could be many kHz wide (e.g. ~10 kHz wide for 9k6 FSK).

A few tips for working with these kinds of signals:

Populating frequencies.txt from the SatNOGS DB

I have written a script which will dump the known satellite frequencies from the SatNOGS DB, and export them in a frequencies.txt comptible format. This script is available here: https://github.com/darksidelemm/satnogs-extras/blob/master/scripts/strf_frequencies.py

To use it, you will need python, and the requests library. Under Debian/Ubuntu systems, you can get this by running:

To grab frequency data for the 2m and 70cm amateur radio bands, run:

Running a strf capture in parallel with a SatNOGS ground station

I've had a few situations where I wanted to have strf capturing doppler data in parallel with my main SatNOGS ground station. To do this, I wrote a python script which grabs the upcoming observations for my station and outputs a list of cronjob commands. The script is available here: https://github.com/darksidelemm/satnogs-extras/blob/master/scripts/strf_cronjobs.py

Copy the lines into your users crontab and you should be good to go!