The current document provides a descrption of the work developed for GNSS-SDR during the GSoC 2017 program. This project intended to extend the capabilities of the GNSS-SDR software by providing a working implementation of GLONASS L1 SP signals.

This project helps to increase the number of signals capable of being processed by the GNSS-SDR software. Its objective was to expand the receiver to GLONASS signals, providing a working implementation ofthe GLONASS L1 SP signals, delivering RINEX files (the standard input of geodesic software libraries for high—accuracy positioning) and an on-the-fly navigation solution (that is, computation of position, velocity and time of the user’s receiver).

Given the project complexity and length, the original idea proposed here was divided in two modules:

The work developed during the summer, and described here focuses in point 2 above.

GNSS-SDR provides an interface to different suitable Radio Frequency (RF) front-ends and implements all the receiver chain up to the navigation solution. Its design allows any kind of customization, including interchangeability of signal sources, signal processing algorithms, interoperability with other systems, output formats, and offers interfaces to all the intermediate signals, parameters and variables[1]. Code for the platform is mainly developed in C++ as an open source and uses a considerable part of the GNU Radio framework for all signal processing activities of the receivers. To that goal code is written efficiently to be reusable,easy to read,maintain and modify is required according to the user needs. In that sense, the challenge consists of defining a gentle balance within level of abstraction and performance. GNSS-SDR runs in a personal computer and provides interfaces through Universal Serial Bus (USB) and Ethernet buses to a variety of either commercially available or custom-made RF front-ends, adapting the processing algorithms to different sampling frequencies, intermediate frequencies and sample resolutions. This makes possible rapid prototyping of specific receivers intended, for instance, to geodetic applications, observation of the ionospheric impact on navigation signals, GNSS reflectometry, signal quality monitoring, or carrier-phase based navigation techniques. As an object oriented platform and with the idea of keeping a sense of abstraction in the blocks developed, GNSS-SDR is divided into several main blocks that participate in the whole process of navigation for receivers. These stages, see Figure 1 obtained from [2], called interfaces as part of the abstraction level in the software are divided as follows: 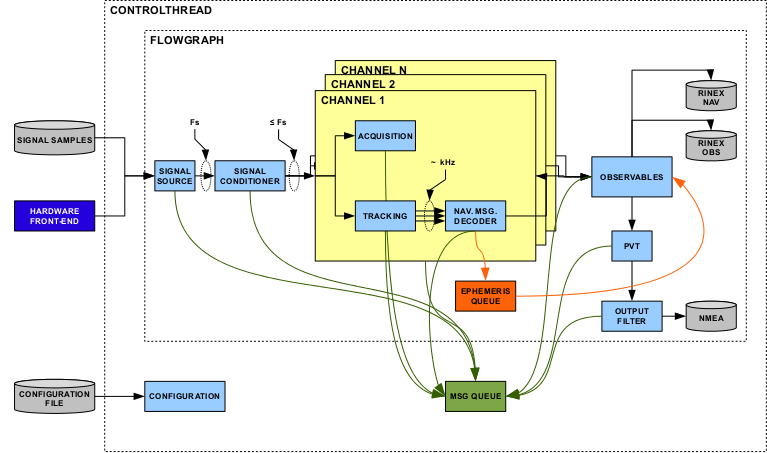 The work described here is only related to the Telemetry Decoding, Observables and PVT interface, and more information on it may be found a the next sections. It is outside the range of this report to explain the rest of the interfaces, however documentation for the platform is excellent, and further details on the rest of the main GNSS related interfaces may be found at [3],[1] and [4].

Code developed during the summer will be integrated into gnss-sdr as a single pull request. For inmediate inspection the reader is refered to the development branch for the project called glonass_dec. This branch is still under heavy development until all task in the to do list presented below is completed. The most significant commits in this project are highlighted below

The figure below perfectly illustrates the navigation message structue from GLONASS satellites. The superframe has duration 2.5 minutes and consists of 5 frames. Each frame has duration 30 seconds and consists of 15 strings. Each string has duration 2 seconds. Within each frame a total content of non-immediate data (almanac for 24 GLONASS system satellites) are transmitted The equivalent sequence to the preamble information common in use for GPS and Galileo satellites is called the time code. It is broadcast at the end of each string and is 0.3 s long and consists of 30 bits. This equals a bit rate of 100 bit/s, the same as the meander signal. The time code is a fixed but shortened pseudo-stochastic sequence, consisting of the characters: 111110001101110101000010010110 The first bit of the digital information of each line always is a 0 to complete the shortened sequence of the time code of the previous line. Details of this navigation message can be observed below: 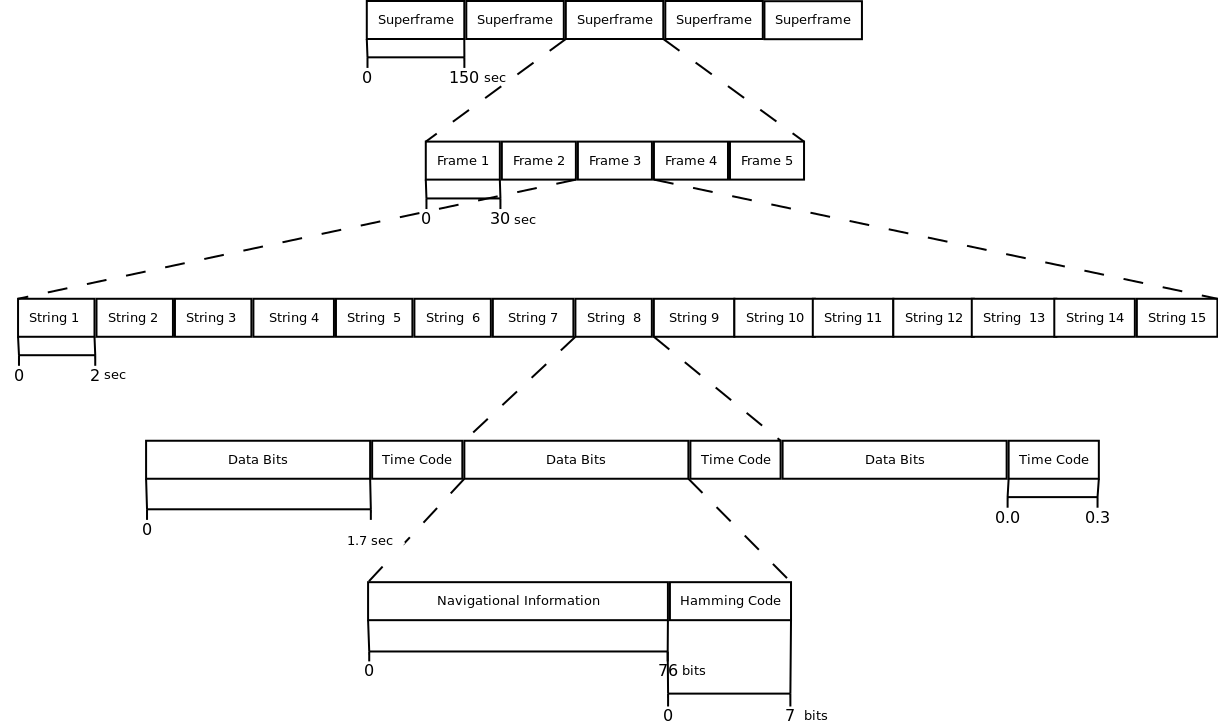 Once signal is properly tracked, the tracking block will start to populate the required fields in the gnss_syncro object. The symbols populated in the object will then be used to decode the Globalnaya Navigatsionnaya Sputnikovaya Sistema (GLONASS) navigation message, which was described above. Key to a successful decoding of the message is to keep a relation of the bit position for each of the fields to be decoded in the message.

String 5 as shown below contains non inmediate information that is stored in the glonass_gnav_utc_model object. The naming convention of this object followed the previously developed code, however, a careful reader will notice that contents of this string contains more than UTC parameters.

Finally, string 6 and 7 showed below serves as a template since its content is repeated for the rest of the strings when in frames 1 to 4. The contents of these strings are stored in glonass_gnav_almanac objects.

When in frame 5, the contents of string 14 and 15 changes to provide additional information related to clock parameters [9], [10]. This case is illustrated below: 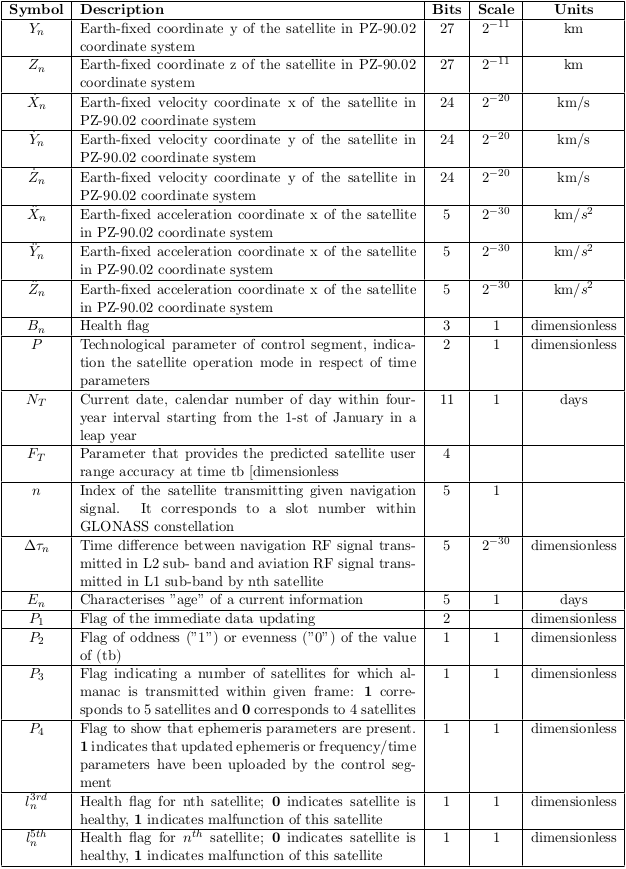 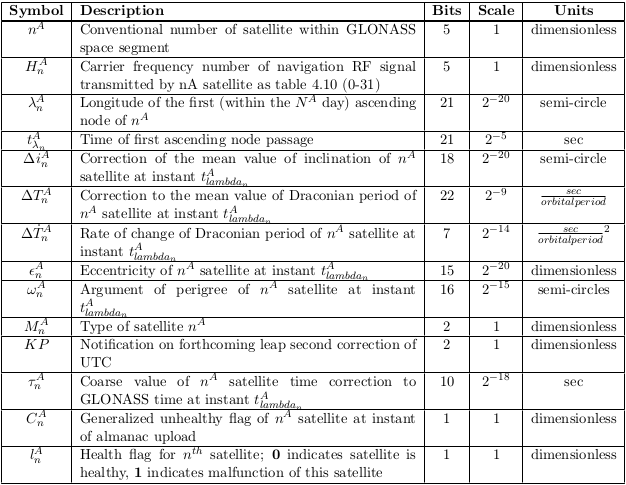 Following the pattern of developed code for other systems, the GLONASS system implementation also included a UTC model description. The reader is warned that although the object developed contains this name, its true development allows to do more than what the name encompass. In the case of GLONASS, the so called UTC Model object also contains correction information relative to GPS and UT, as such the object is more of a Clock Model. Detailed description of its implementation is provided in the following table

The system parameters inside the GNSS-SDR platform for each signal define a fourth block that for GLONASS processing is missing. Such block is the block containing information about the Ionosphere. Contrary to its counter part systems, such as GPS or Galileo, GLONASS does not provides ionospheric correction information in its navigation message [5] and as such was not included in the GNSS-SDR platform

The current development was done against the next branch in GNSS-SDR, that branch is in the process of swapping the individual observables computation by a more generic module that it is independent of the signal being processed, named Hybrid Observables. As such work in this area was minimalistic and only consisted in making sure that the output from the telemetry decoder interface will meet the requirements of the observables block.

Based on this, the results of the observables block are shown below 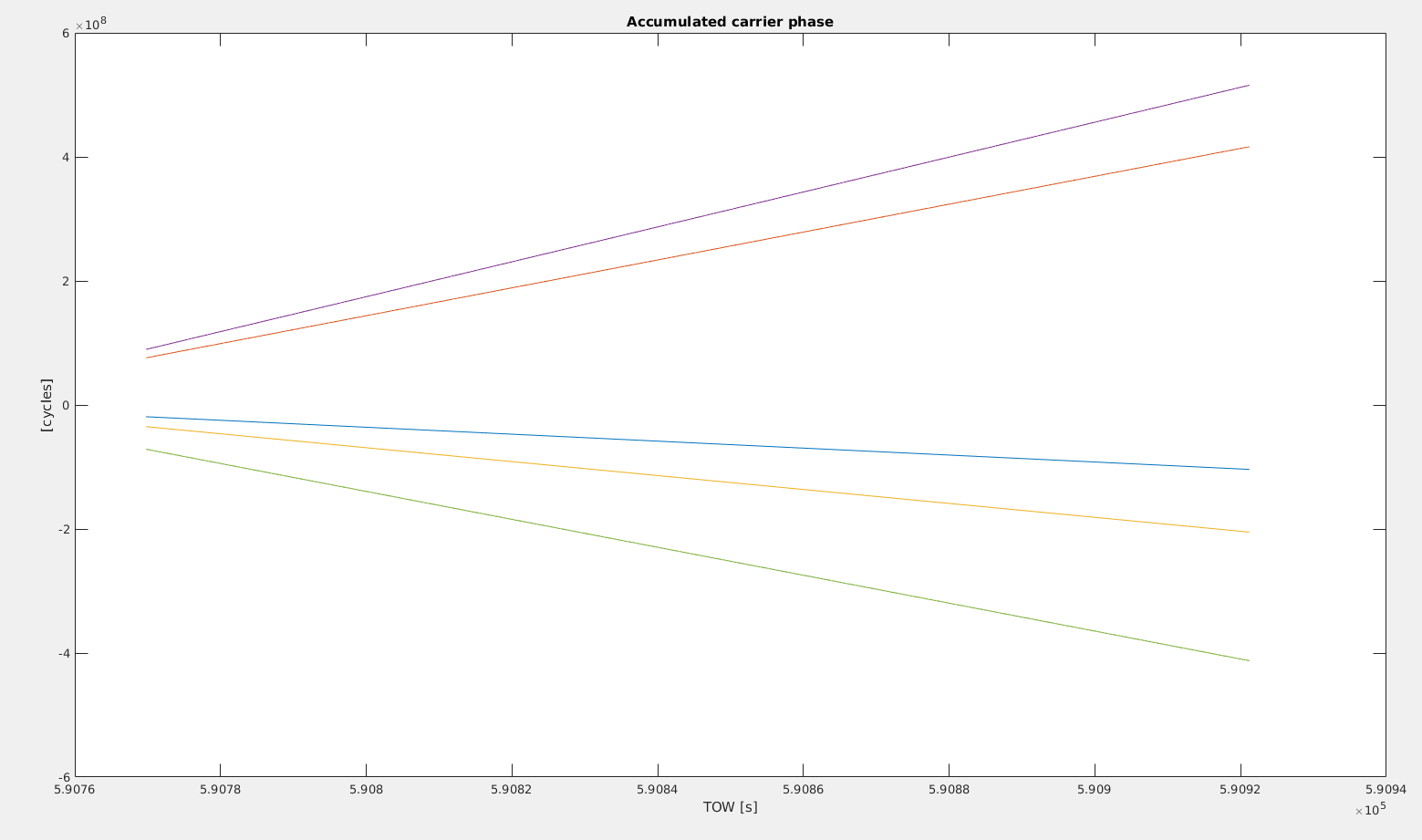 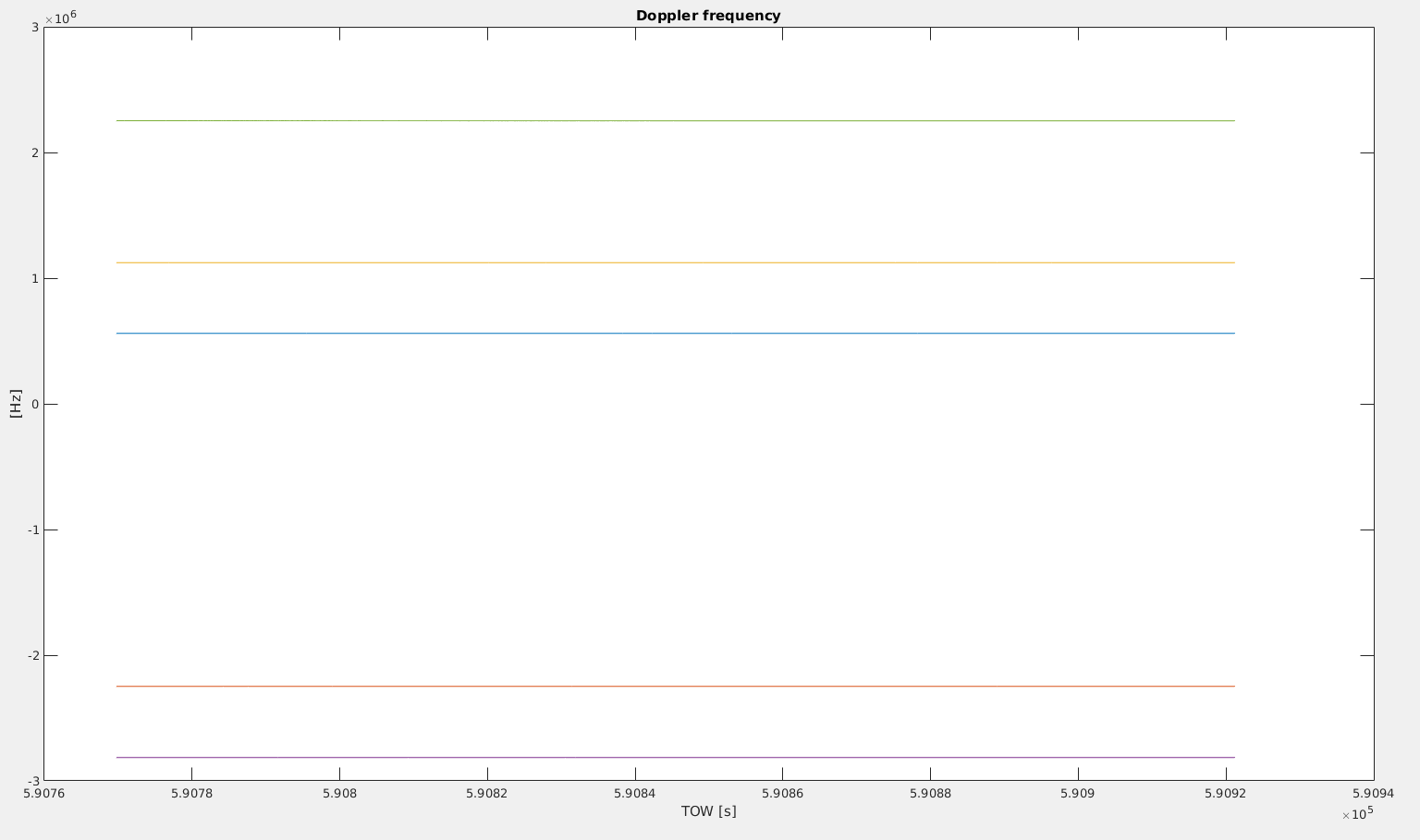 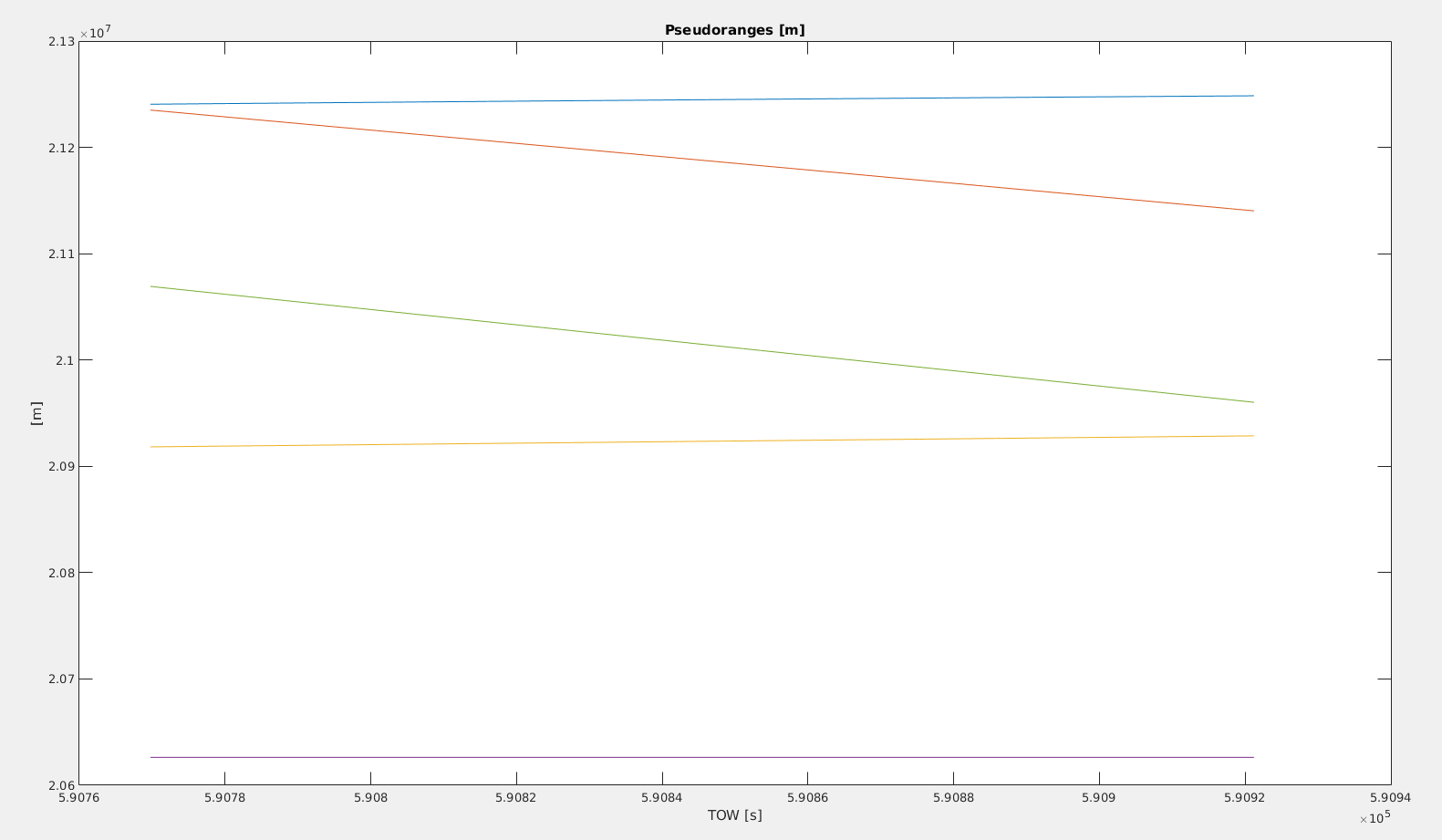 The PVT solution in GNSS-SDR currently uses a module created based on the RTKLib library. As such, the GLONASS integration to this module was only in charge of providing the necessary conversion tools to translate from the GNSS-SDR modules to the RTKLib input. All conversion parameters were developed following the description of the RTKLib API library described in [6].

Initial results in this stage show the position solution when only using GLONASS L1 C/A signal, see below: 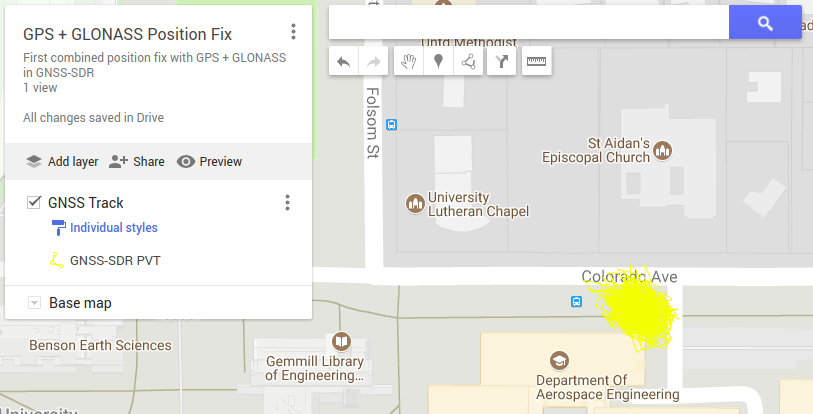 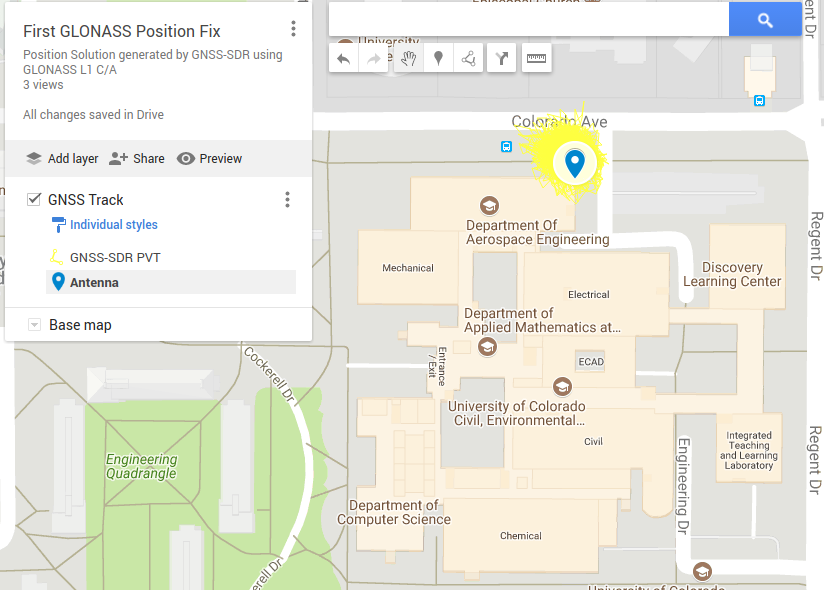 The most significant portion of code to interact with the RTKLib API relates to the RTKLib version of the GLONASS ephemeris information. This ephemeris structure does not follows the conventional eph_t type that is shared between GPS and Galileo system because ephemeris for GLONASS system are different in nature to those specified for the aforemnetioned constellations. As such RTKLib defines a new type for such cases named geph_t and defined as follows:

In order to be able to interact with the RTKLib, the glonass_gnav_eph, as defined above is converted to the RTKLib type following this convention:

This work also adds GLONASS support to the existent RINEX [7] functionality of GNSS-SDR. The support to this type of message was added in such a way that when in the future GLONASS L2 C/A is added, the existent code will be able to handle the new addition seamlessly. Because RINEX files, either observations or navigation type are dependent on the receive signal type, this works also provides support to cases where GLONASS is combined with other constellations or signals. The set of available combinations or receiver types as defined by GNSS-SDR are:

This work also adds GLONASS support to the RTCM DGNSS standard. The support to this type of message was added in such a way that when in the future GLONASS L2 C/A is added, the existent code will be able to handle the new addition seamlessly. Support for RCTM DGNSS can be enclosed in the following additions:

The code is in its final stages and only needs now to integrate the work developed by @Gastd. Upon integration, a period of testing will be initiated to check the correct functionality of the receiver. These steps, are under development at the moment of this writing, however it was important to highlight the milestone of the project achieved during the summer thanks to the sponsorship of the GSoC 2017 program.