This document provides a description of the work developed for GNSS-SDR during the Google Summer of Code (GSoC) 2018 program. The main objective of this project is to extend the capabilities of the GNSS-SDR software by providing an implementation of BeiDou B2a signals. Specifically, this project will be focusing on the telemetry decoding, and processing of observables and position, velocity, and time (PVT) components of the receiver, and will be merged with the acquisition and tracking portion of the receiver to provide a fully functional BeiDou B2a receiver.

The current GNSS-SDR platform is a software defined receiver that supports GPS, GLONASS, and GALILEO Global Navigation Satellite System (GNSS) signals. It also partially supports BeiDou signals, but this is limited to the BeiDou B1l signal. This project will expand the software receiver to accommodate acquisition and tracking of BeiDou B2a signals that would further expand the receiver's capabilities in facilitating research on multi-constellation and multi-frequency receivers working iwth real signals. In addition, the demodulation of the navigation messages will open the door to innovation in multi-constellation receivers, addressing topics such as integrity, reliability, robustness, enhanced coverage, and high-accuracy positioning. Furthermore, the integration of BeiDou B2a observables into the position, velocity, time (PVT) solutions will allow the achievement of the aforementioned diverse range of applications and components.

To be more specific, this project is the second stage of the GNSS receiver, which comes after the acquistion and tracking of BeiDou B2a satellite signals. This project will be mainly divided into:

Code developed during the summer will be integrated into GNSS-SDR as a single pull request. For the inspection of the code, the reader is referred to the development branch of the project called b2a_pvt. This branch is still under development until all the tasks in the to do list presented below is completed. The most significant commits in this project are highlighted below:

Below are some of the commits for this project

The reference used to develop the code was based on the BeiDou Navigation Satellite System Signal In Space Interface Control Document - Open Service Signal B2a - v1 The BeiDou B2a signal broadcasts the B-CNAV2 navigation message, so the message will be referred to as B-CNAV2 nav message for the remainder of this page. 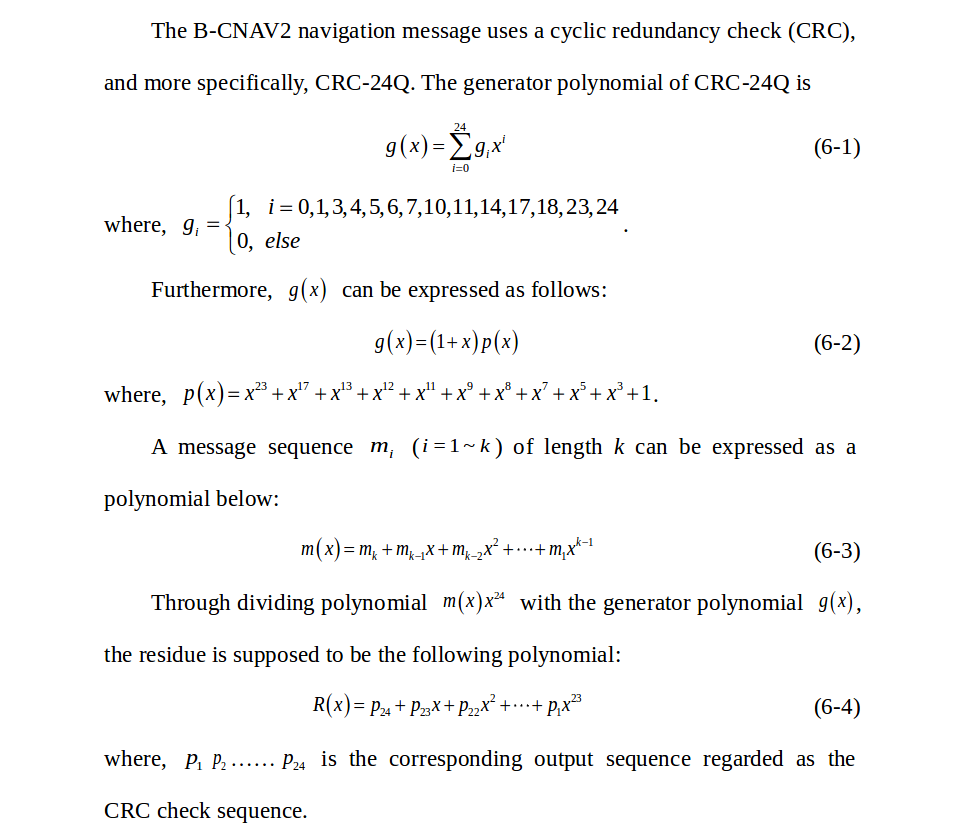 For the CRC calculation, we use the PRN, MesType, SOW, and message data. (explained in the next section)
For the computation of the CRC computation, a ready-made code was used from another opensource project Global Positioning System Daemon - GPSD. The codes used were crc24q.c crc24q.h.

The B-CNAV2 navigation message is broadcast on the B2a signal. More specifically, the B-CNAV2 message data are modulated on the B2a data component. The basic frame structure of B-CNAV2 is showned in the figure below. Each fram has a length of 600 symbols, and its symbol rate is 200 symbols per second, so the transmission of one frame lasts for 3 seconds.

The first 24 symbols of each frame is preamble with the value of 0xE24DE8 in hexadecimal (111000100100110111101000 in binary). The MSB is transmitted first.
Each frame before error correction encoding has a length of 288 bits, containing Pseudorandom Noise (PRN), Message Type (MesType), Seconds of Week (SOW), Message Data, and CRC check bits. 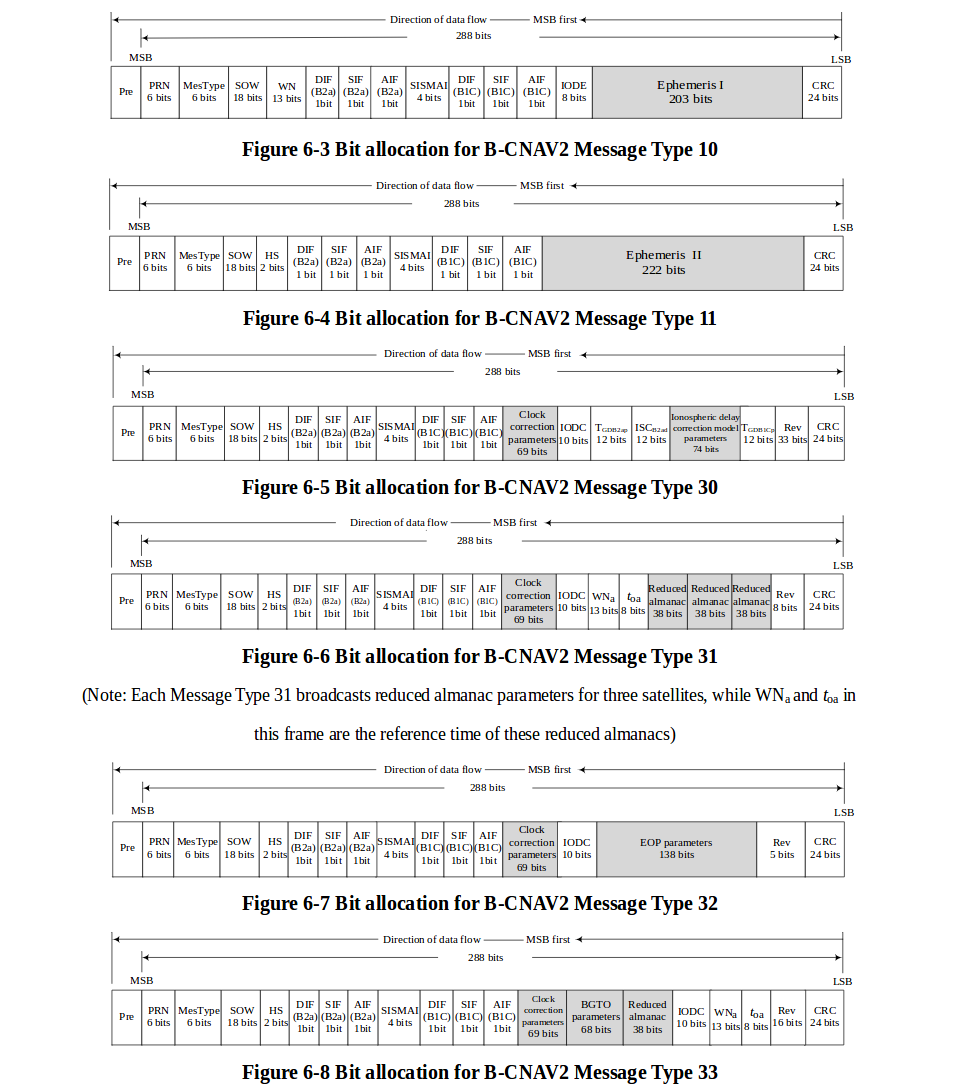 The parameters can be broadly grouped into following subsections.

These have been assigned to 3 types (ephemeris, almanac, time) and processed for simplifcation.
For further details of these parameters, their conversion factors, and relevant user algorithms, please refer to the BeiDou B2a ICD.

To ensure that all the above parameters are decoded correctly, unit tests were implemented for the navigation data decoding

An example portion of the code is as below 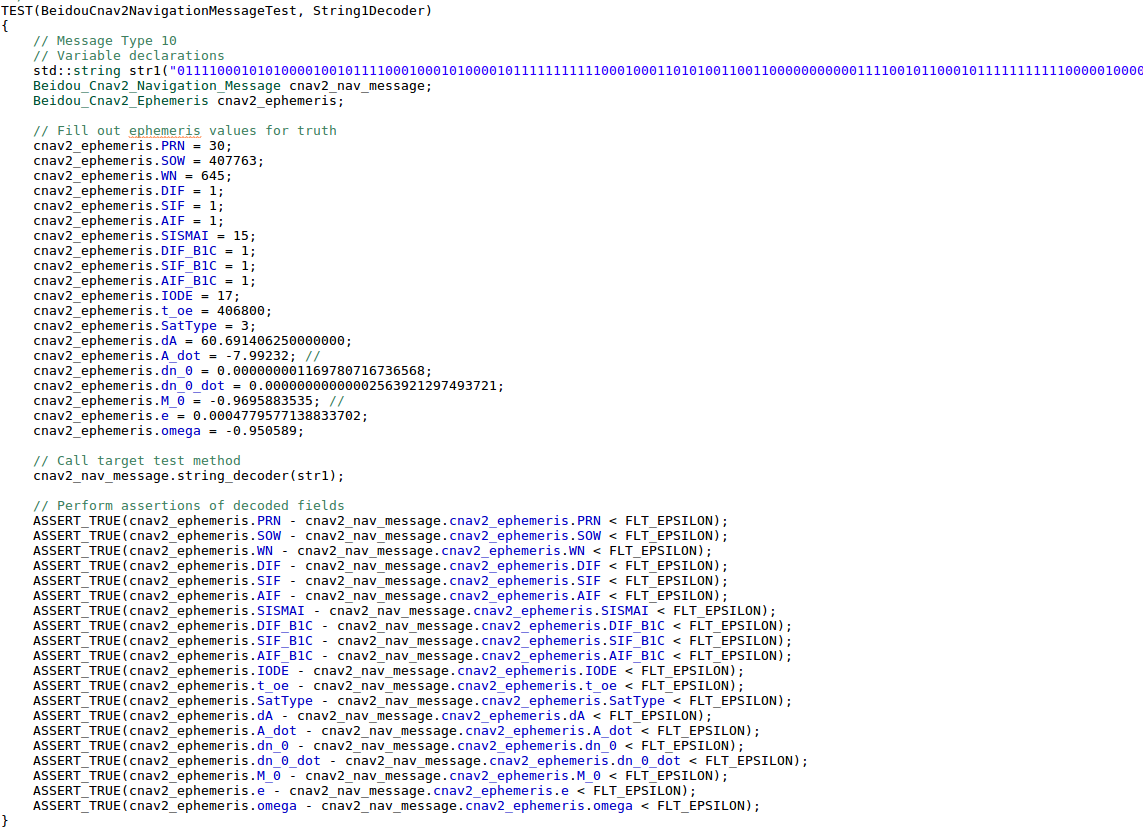 In order to run the unit tests, we use the following commands

This allows us to run all the unit tests for Beidou.
If we would like to look at the specific tests, we can simply use the following command

We can see that if we run the BeiDou B2a tests, the following unit tests have been successfully been passed 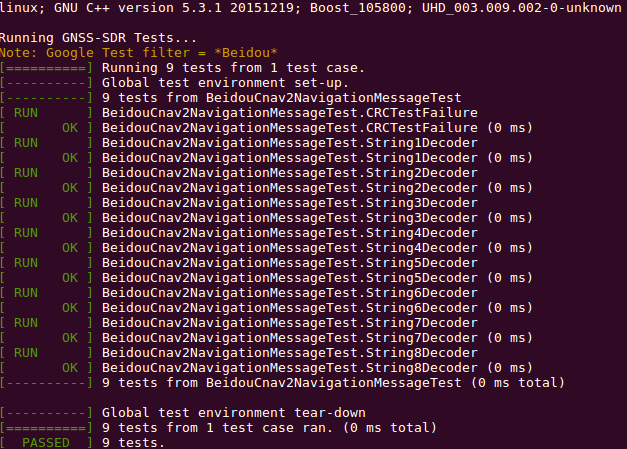 All the ephemeris parameters are converted to RTKLib compatible values 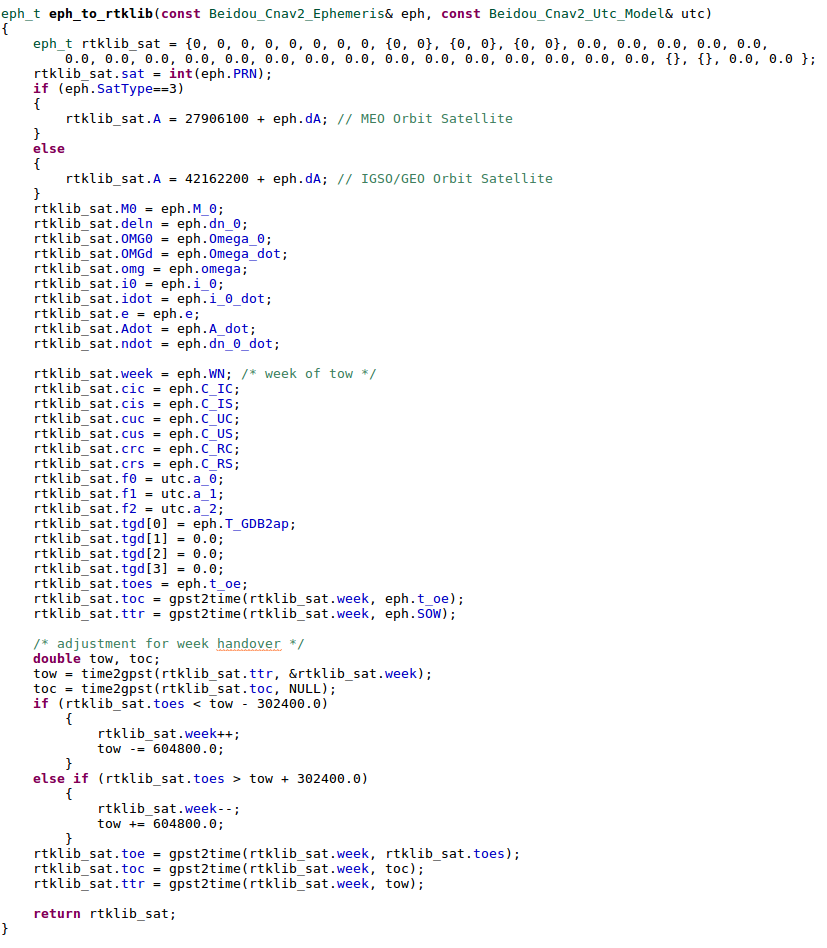 The RINEX output format is set as the RINEX v3

Unfortunately, due to the unavailability of BeiDou B2a data where there are more than 3 satellites outputted from the tracking loop, PVT performance of B2a satellites could not be confirmed. On the other hand, the other components were verified with unit tests, and the data decoding portion was successfully verified with actual B2a data.
After merging this code with the BeiDou B2a acquisition and tracking code, resolving remaining bugs, and following the future launch of BeiDou B2a satellites (There should be several more by the end of this year), the full performance of the code implemented in this project will be further analyzed.

This was a fantastic experience to participate in the Google Summer of Code project. I was able to find out about, and contribute to an open source project, and develop a lot of coding skills by receiving a lot of guidance from my mentors. I plan to continue to work on this project even after the GSoC, so that the receiver will be fully functional for the public. Also, I will be interested in participating in more open source projects in the future! It was a great opportunity to both learn and contribute. All this was achieved thanks to my mentors, GNSS-SDR, and GSoC 2018 program. Thank you Google for this project, and an opportunity to develop an insight into the opensource community!