With Swift concurrency, functions, initializers, read-only properties, and for-loops can all be marked async. Property getters can also throw.

async enables a function to be suspended while the task is performed. await marks where an async function may be suspended. The thread that suspends for an await call is not blocked, and can perform other work.

Continuations provide a bridge to older completion handler based code into new async based methods.

Resumes must only be called once for each path. Discarding the continuation without resuming is not allowed.

Continuations can be stored as properties and called outside of the defining scope to support behaviors such as working with delegate callbacks.

The following async let and group tasks demonstrate structured concurrency where tasks can be executed within other tasks, and also provide the ability to cancel tasks while propogating that to other tasks in the structure.

To allow multiple concurrent tasks to execute together as a group, nest them within a group task. Each sub-task is invoked by calling group.async { ... } within the group.

The above code has an issue though: concurrent access to the thumbnails property. That structure is not thread-safe, so we need to fix the issue using by returning values to the task group, and then update the final storage with a new for try await loop.

Check if a task has been cancelled during the scope of an async method:

This is useful when grouping tasks, or checking to see if a task within multiple calls to throwing async methods has failed, and we no longer want to continue additional work.

Groups can also be cancelled:

This task will execute the blocking fetchThumbnails method on the thread it was called on. In this case, the main thread since it was from a collection view delegate method. However, the calling scope is not blocked and is allowed to continue execution. The task will be executed later when it is efficient to do so.

The lifetime of the Task is not limited to the calling scope. It will live on until the await is fulfilled. Can be manually cancelled or awaited. Below is an example of cancelling the task to fetch thumbnails for a collection view cell after it is scrolled out of view:

Unstructured tasks that have unscoped lifetime, manually cancelled and awaited, and do not inherit their originating context, e.g. the thread which it was invoked. These run independently, and can be configured with custom priority and other traits.

If the background detatched group is cancelled, all sub-tasks will be canceled as well. These sub tasks will also inherit the priority of the parent task.

Actors provide synchronization for shared mutable state. Actors isolate their state from the rest of the program. The actor will ensure mutally-exclusive access to its state.

Actors are similar to structs, classes, and enums, but are their own fundamental reference type. They can conform to protocols and be extended with extensions. Their defining characteristic is that they provide synchronization and isolation of its state.

Calls within an actor are perform synchronously and run uninterrupted.

Calls from outside are asynchronous, and can be awaited.

Within the actor, we may use await calls that may suspend the method. Be sure to note that the state of the actor can change by the time the awaited call completes. Do not assume that that the state is the same, and make sure to check for mutations that may have happened during suspension. These assumptions should be checked after resuming from an await.

nonisolated keyword. Methods decorated with these keyword are defined as being "outside" of the actors controlled state. These methods cannot access mutable state on the actor, since it can be accessed outside of the controlled state. The following example shows how to conform to Hashable by using a nonisolated implementation of the hash(into:) method that uses an immutable id property. Using a mutable property in the method would lead to a compiler error.

In the case where we have non-isolated closures that call back to mutate the actor, we need to ensure that we re-enter the actor in a safe way using await.

Sendable types are objects that are safe to share concurrently. It is a protocol and can be conformed to.

Classes for example are typically not safe because other objects can mutate their state at the same time and cause a race condition. Classes can only be sendable when their state is immutable, or interally performs synchronization. Value types are sendable because they can be modified independently since they are copied with each instance. Actor types are always sendable.

Functions can be sendable, but not always, and may be defined as such with the @Sendable keyword. This keyword is used to indicate where concurrent execution can occur, and prevents data races when accessing captured variables.

Detatched tasks required sendable closures, and is defined like so:

Sequences can be iterated asychronously. This is done with an iterator that uses a async method to return results to a loop. The loop can use the await keyword to handle each element as they are provided.

These can also be placed within tasks to prevent the calling thread from suspending, or if they run indefinitely:

They can also be cancelled:

FileHandle objects can now provide bytes in an async fashion:

You can also asynchronously access bytes or lines from a URL:

Read bytes from a URLSession: 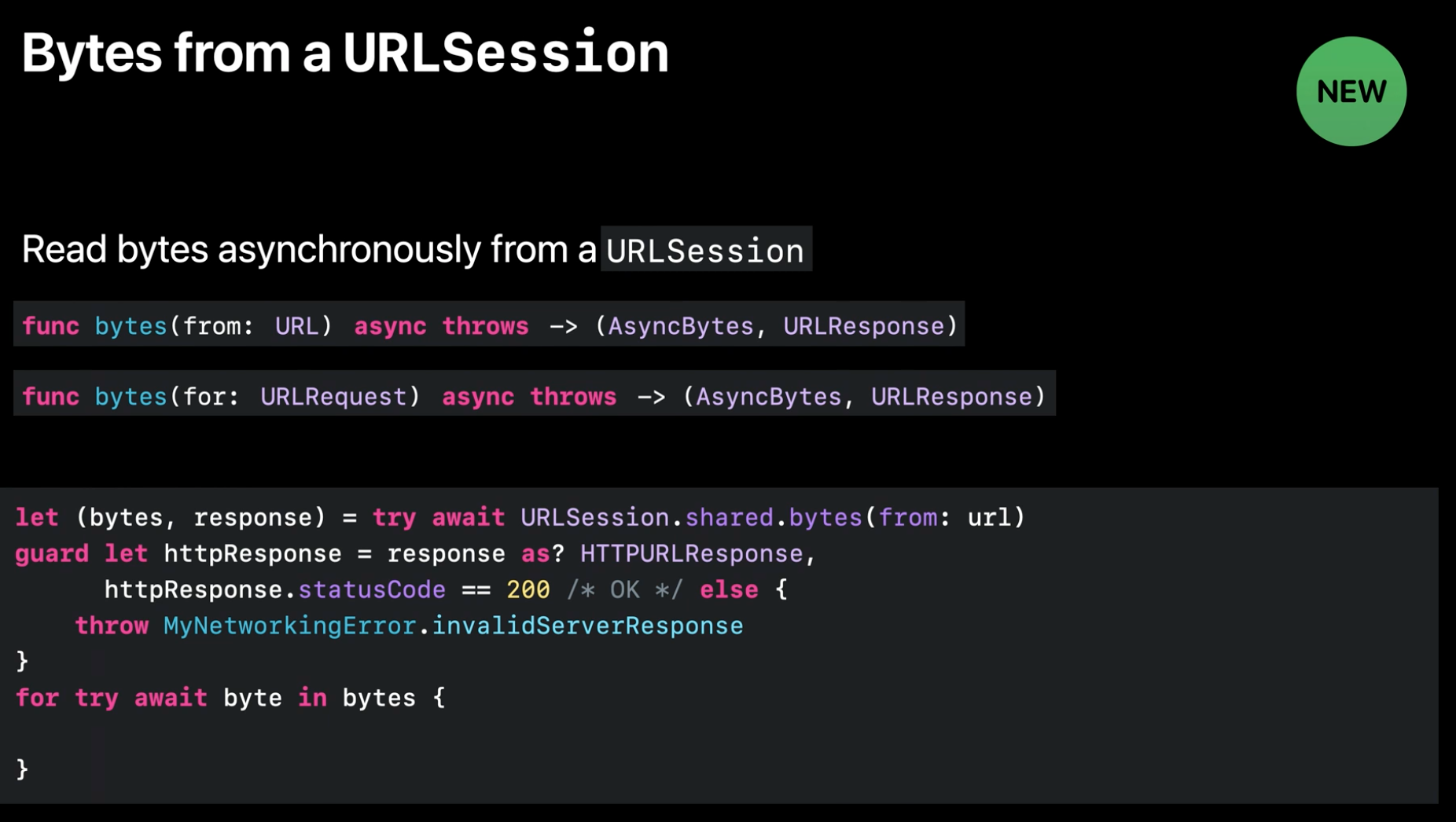 Video: Use async/await with URLSession

You can wait for notifications to be delivered:

AsyncStream can be used to adapt existing callback patterns to provide a stream of values compatible with swift concurrency.

The AsyncStream can then be iterated over using for await as values are provided.

Use AsyncThrowingStream to produce a stream of values that can also throw.