Hi, I'm Geoff. I stole off all your NFTs. 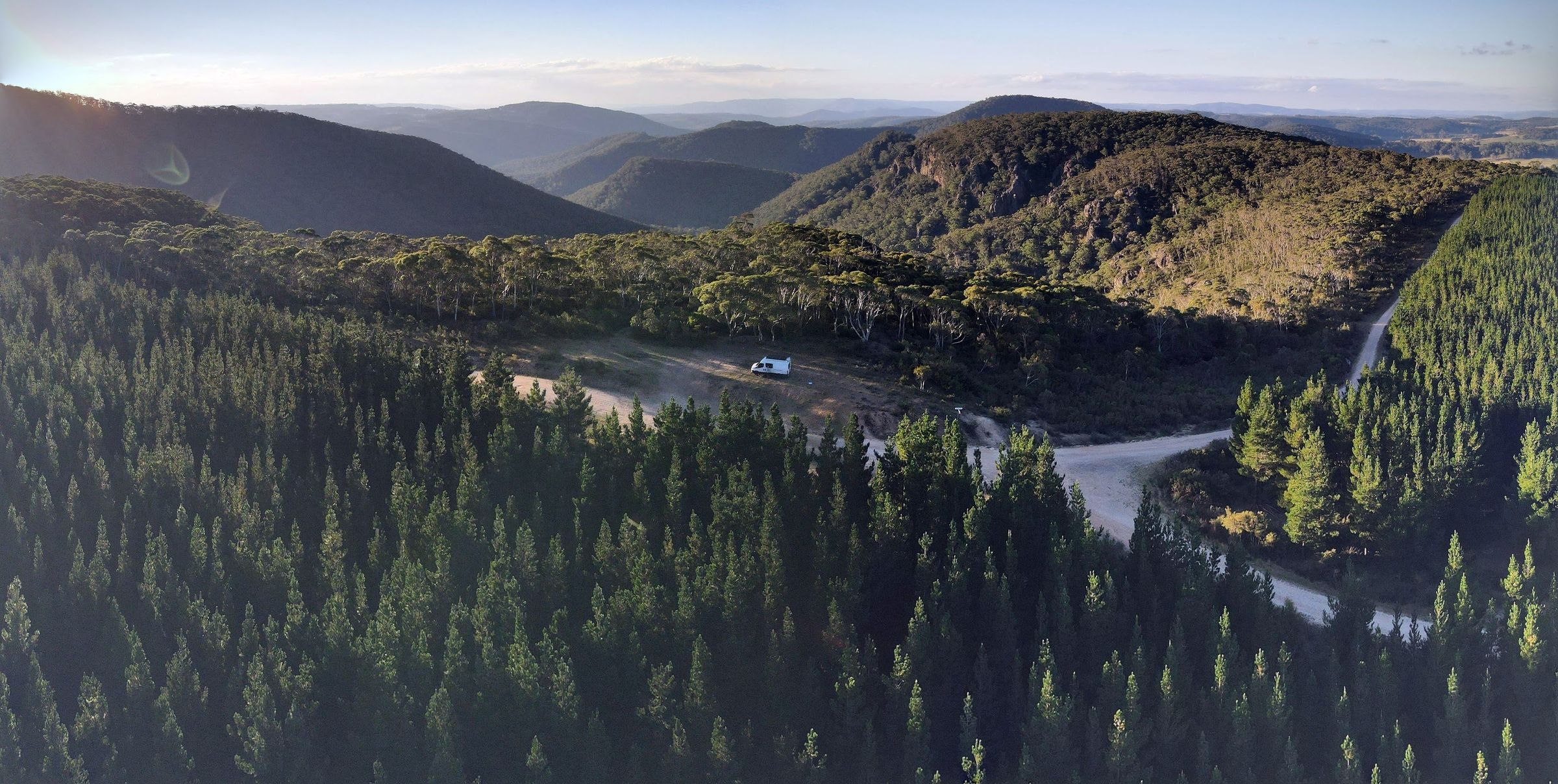 I respectfully ask that you don't quote me as “$company person Geoffrey Huntley said” – if I speak for a company, I will publish on its channels. My full name is "Geoffrey Huntley" please use that and not "Geoff Huntley".

I can be contacted via https://ghuntley.com/media/

Can you tell me a little about yourself?

Hey, I'm Geoff. After many previous adventures involving cycling through many countries on a unicycle [0] I now live a minimalist lifestyle in a van [1] that is slowly working its way around Australia. In a previous life, with friends, we had a small business running computer gaming LAN's and we ran the first eSport competition in Australia. Somewhere inbetween that I ran one of the first ever video [2] blogs. 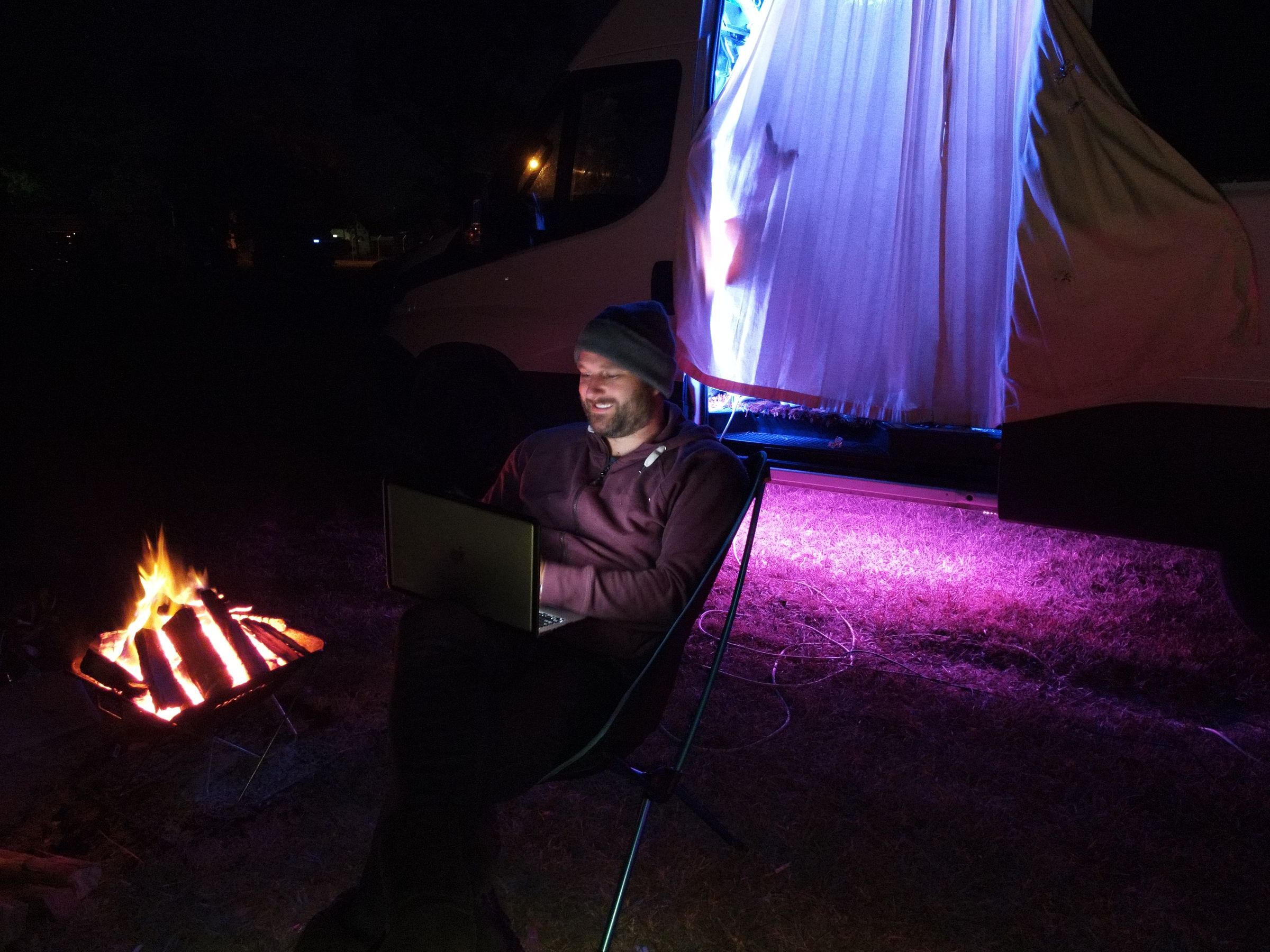 Was it harder to cycle through many countries on a unicycle or assemble all the NFT’s from Solana and Ethereum?

It was easier to put together the torrent than it is to ride a unicycle. 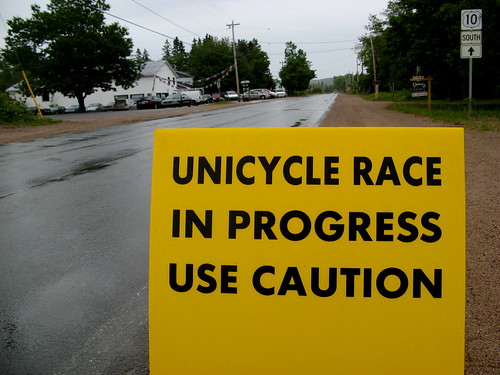 Were you surprised to get so much attention for the NFT bay project?

I knew the art project was something special when after sharing sneak peaks with folks in the infosec community gained reactions such as:

In a possible twist, are you afraid that this artwork may become a NFT without your consent

It’s been quite entertaining watching the evolving interaction between you and VVD.

It already has and we are now into inception territory. VincentVanDough NFT'ed the website and commented that if the sale was to pass six figured he would buy [1] me a new van. Unfortunately I won't be getting a new van because the transaction closed at a mere $17,645.42 USD. In response to this I've [2] NFT'ed his NFT with funds being diverted towards Outreachy [3] Internships.

Are you creating anymore NFTs

"The collector becomes the collected" [1] is the only NFT I intend to ever mint. The feud with VincentVanDough is :chefskiss: level meta art.

How did this idea pop-up? Did you have an eureka moment?

Shooting the shit with Stephen Diehl [1]. We have both seen a programming language become over indexed in the cryptocurrency space and if things were to ever go belly up I'm not sure Haskell would ever recover. I came up with the idea and did all of the execution but Stephen came up with the name "The billion dollar tarball" from that point onwards it was non-stop cackling intermixed with sleep deprivation to get the project launched.

For authenticity I was going to host at [1] PRQ but unfortunately they don't offer servers with enough disk space. The seedbox hosting the torrent has 4 x 10TB Sata drives configured in RAID0 and the website is humming along just fine even though the website is going insanely viral. If you like what I'm doing and want to see this expand, consider a small donation to the wallet listed at the bottom of www.thenftbay.org.

Which was the precise Twitter Space for NFT’s which triggered you and finally pushed you to create The Billion Dollar Torrent? 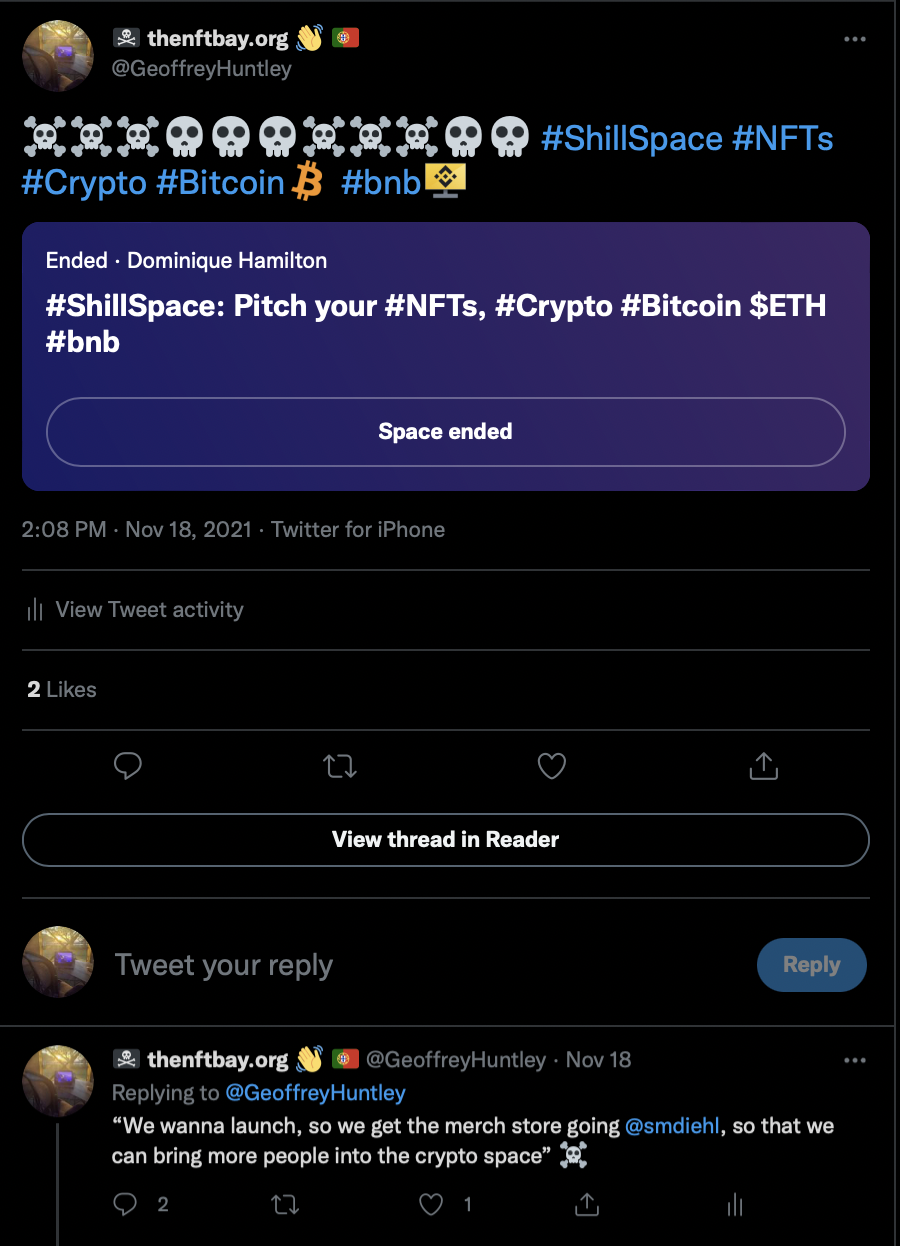 How long did it take to complete the project?

About three days from beginning to launch.

Will the ~17 GB of the The Billion Dollar Torrent be expanded? Will it update as new NFT’s arrive?

This is a one time thing and will be soon uploading the project in it's entirety to the Internet Archive [1] for future generations to study.

Are you planning to create further actions in the crypto scene or your craft is now complete?

One of the co-founders [1] of Razor1911 [2] stumbled upon "the scene release" and had the following to say:

Hah.. awesome dude, fantastic work. I stumbled across this on pure chance. I was one of the snotty 13-14 year olds starting Razor 1911 back in 85.. - Insane TTM

I'm done (for now at least) but will be hanging around web3 space. If people want to keep up to date with what I'm doing the best way is via my newsletter at https://www.ghuntley.com/newsletter. In a couple weeks time I intend to author up a retrospective blog post that recaps the entire timeline and peoples reactions.

Do you see this as more of an art piece? What do you see as the role of art in society?

You understand the creation of The Billion Dollar Torrent as an artwork which wishes to change the course of the NFT art sector. What would be your ideal scenario if successful?

It's an educational art project. Back in the 1990s in Australia there was a politican that was gaining popularity and their viewpoints are (still to this day) quite harmful to the LGBTQ community. In response one of the members of the community responded by creating art which was successful in changing the course of Australian politics:

Earlier this morning I was hanging out in a Twitter space for NFT's and the host was:

Fundamentally, I hope through http://thenftbay.org people learn to understand what people are buying when purchasing NFT art right now is nothing more then directions on how to access or download a image. There is a gap of understanding between buyer and seller right now that is being used to exploit people. The image is typically not stored on the blockchain and the majority of images I've seen are hosted on web2.0 storage which is likely to end up as 404 meaning the NFT has even less value.

Do you think some malicious actors may use the data of The Billion Dollar Torrent to exploit non savvy users?

No. I am comfortable that this won't happen.

Are you afraid of possible legal issues for creating this torrent from art owners or law institutions?

From what I've seen many artists are quite [1] [2] [3] happy with the website. If someone wishes for content to be removed then there the DMCA takedown process is documented in the footer of https://thenftbay.org

What's your general take on NFTs?

The NFT market is vast, there is clearly a hype surrounding this new market as of course scams hunting for new victims or pump-and-dump schemes, but, don’t you think it may be too unfair to condemn the whole industry? Do you see noble actors in the NFT space?

The utility (and value) of NFT's will be created through social media platforms. For many digital representations is > physical representation and (if/when) Twitter/TikTok (discord backed away from it) roll out the ability to display flair on a social media profile that will be a turning point. We see how bananas people go over the Twitter blue verified checkmark - now think how social media will change when people have the ability to display verifiable proof of membership (early investor of Uber, Forbes 30 under 30) vs adding the words to a social media bio. All of this however could be achieved without blockchain.

What people dream to build with "web3" is quite amazing but the greed/scamming going on is sickening. The dreams for a different future remind me of the internet in the 1990s. What's fascinating here is the communities are very strong and can self-fund the discovery phase whilse searching for application. The early internet was built on a gift economy (ie hippies) yet what people seek to build now is capitalistic and full of pump and dump schemes. Perverse incentives related to money are well understood and at this time I don't quite, yet, see how the industry is going to resolve problems created by money.

Are you highlighting the same unsafe properties of NFT’s as discovered by Jonty Wareing back in march, in which he pointed out unsafe properties of the NFT token of the famous Beeple NFT artwork Crossroad as an example? In general, would you say NFT’s are safe or unsafe? Thread in detail: https://twitter.com/jonty/status/1372163423446917122

I was unfamilar with Jonthy Wareing's work - thanks for sharing. Anyone trading/speculating with NFTs should only be doing so with play money that they are willing to lose as there is lots of shady stuff and liquidity issues behind the scenes.

good morning, I'm oscar, Study to be programmer, I took a buck i had saved and invest in half a coin of solana, I have many financial problems, sometimes I have no money or to eat right, wanted to know in relation to the billion dollar, please.. Can you help me? I want to change my life, change the life of my family, have a better condition, please help me, I can not speak English, sorry if there are any mistakes. I am from brazil.

I replied back to this email with:

Don't invest in crypto. Invest in yourself.

I too have been homeless. Make wise decisions (study above) and change your path. If I'm ever in Brazil then happy to grab beers. Find me in the future when you break into software development.

You got this, Geoff

I don't have a good computer to focus on my studies, it limits me a lot

Here is a unique 3 month coupon (redacted) that's just for you. With this you will be able to study software development via powerful computers (https://www.gitpod.io) on any device in the world. Again, use this opportunity wisely and report back in 3 months. I'm happy to extend the coupon once again when progress has been made.

How can users check thoroughly that their NFT is really on the blockchain and not hosted in an unsecure Web2.0?

There's a couple tools out there such as https://checkmynft.com which essentially looks at the contract defintion. If you wish to learn how to this then Richard Gaywood has an excellent thread which walks through how to do this at https://twitter.com/PenLlawen/status/1461340111807729668

Do you see a future in web 3.0 or simply another buzzy word being exploited as it was blockchain years ago? 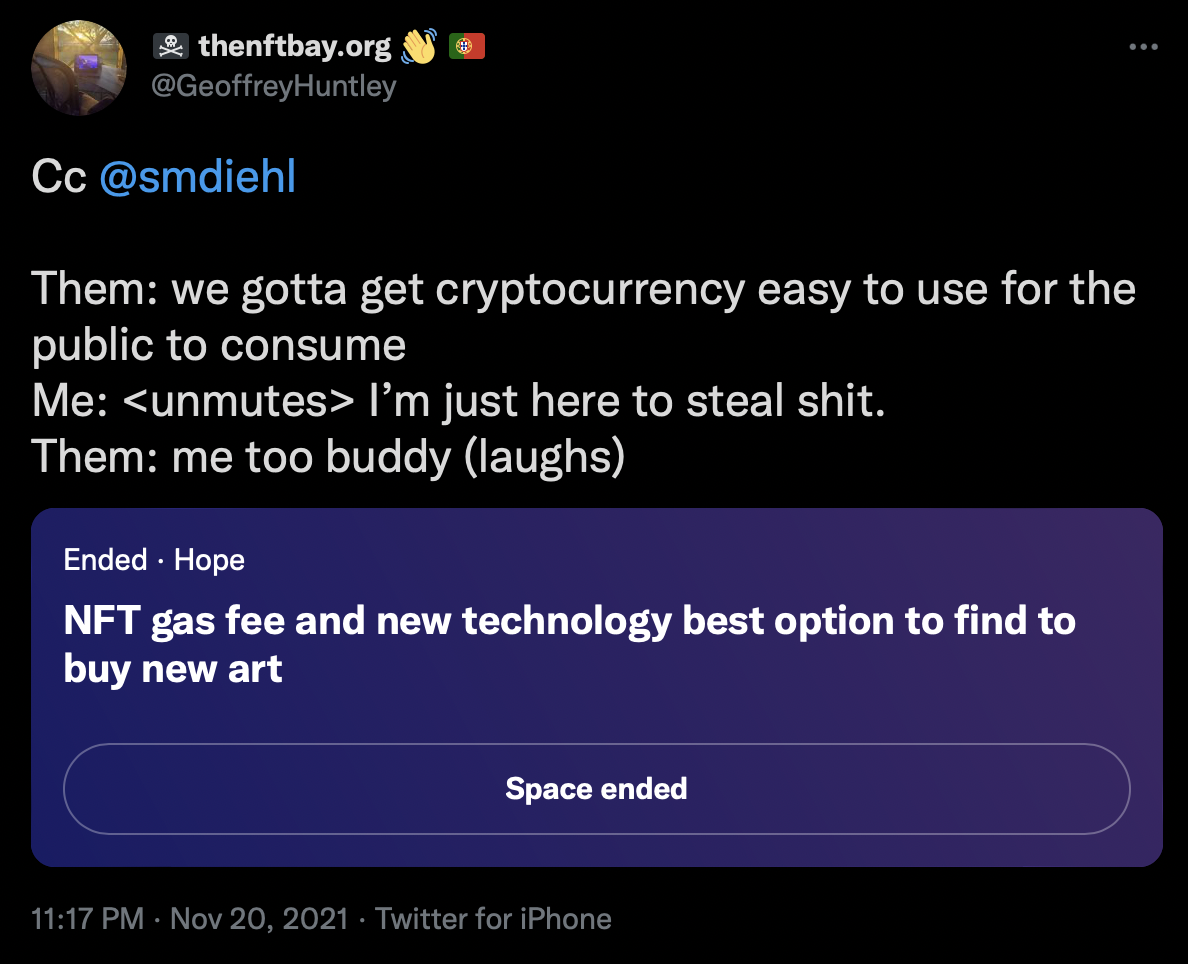