Vacancy observers are a data-fetching strategy for functional UI frameworks which doesn't rely on side effects. Instead, components are written as pure functions, indicating their remote data dependencies directly in their output using vacancies.

An observer may then detect the presence of those vacancies and take appropriate action, depending on the environment. For example:

Side Effects vs. Vacancy Observers

Here's a simplified illustration of how this compares to traditional side-effectful approaches. 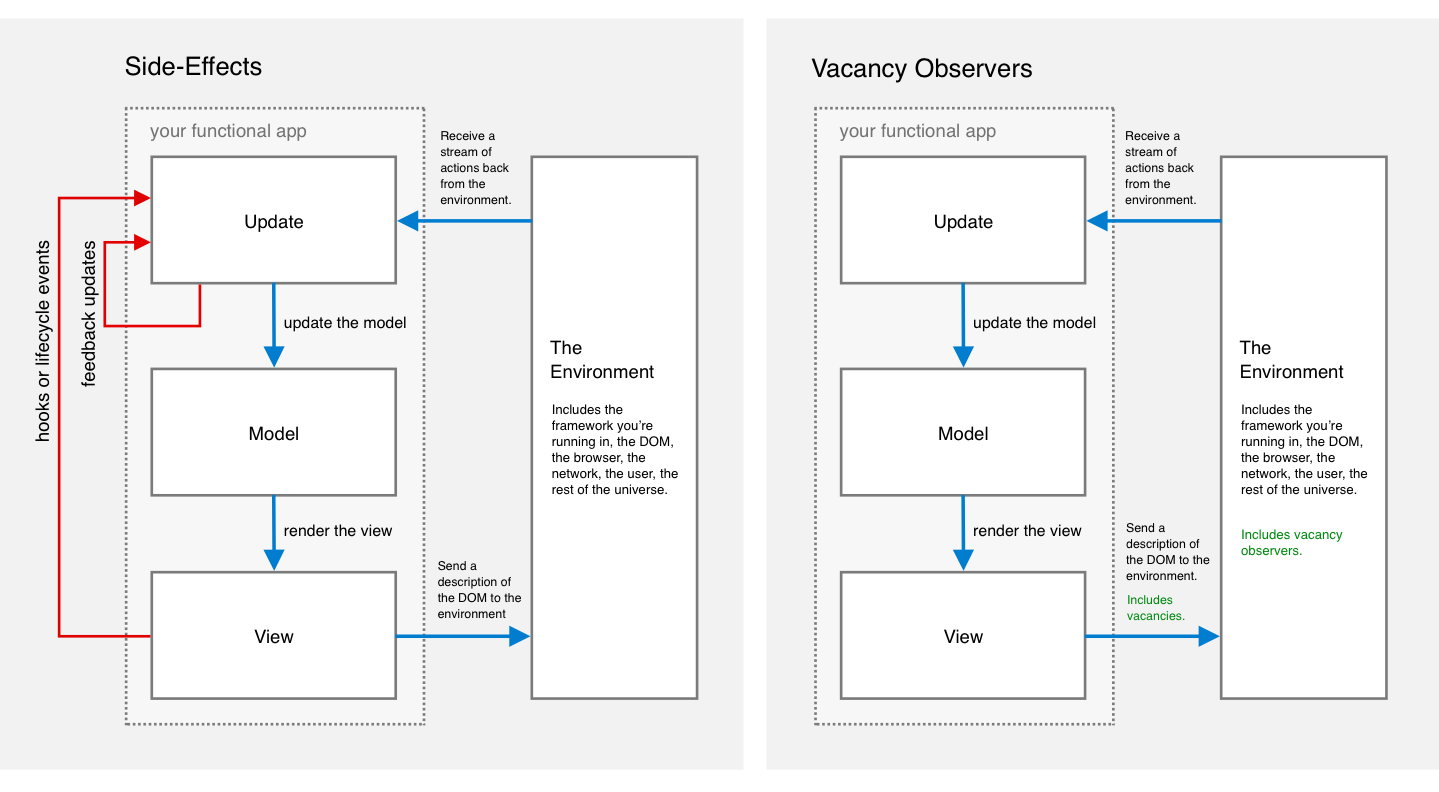 For example, a React component might depend of a piece of remotely-fetched data to be passed in as a prop. Thus, it indicates that dependency in its rendered output as a data- attribute. React then renders that into the DOM.

Elsewhere, a MutationObserver sees that vacancy and fetches whatever’s necessary to fill it, dispatching the data to Redux. As a result, the component receives its remote data dependency in its props in a future render cycle. At no point did the component trigger a side effect.

For one example, HTML's <img> element is similar in concept to a vacancy observer.

Its src attribute functions as a vacancy by indicating a remote data dependency. The observer is the browser itself, which detects the presence of the <img> and makes the necessary network requests in order to display the image. Lack of side effects just means that if you rendered the image in React (for example) you wouldn't need to trigger a fetch on the src, it just happens.

Since React first became popular, there's been an increasingly mainstream movement to use functional programming techniques in UI-building, and for good reason! Unfortunately, data fetching has been a roadblock in this area, due to the fact that something has to fork itself off of the dataflow line and perform that fetch.

Vacancy observers arose out of a simple thought experiment: what would it take to write UIs that didn't actually need to use side effects for data-fetching, and thus didn't need all that extra runtime and testing complexity? You only have one choice, really, which is to include some sort of indication of your data needs in the return values of your component functions.

The motel library provides a reference implementation. Vacancies are implemented as data-vacancy attributes, while the observer is a mutation observer. See that library's readme for more info on how it works.