This sounded to me a good opportunity to use their available data and import it in Neo4j in order to have a lot of fun at analyzing the data that fits naturally in a graph.

As I work mainly offline or behind military proxies that do not permit me to use the ReST API, I decided to go for the Github Archive available here, you can then download json files representing Github Events on a daily/hour basis.

Each file contain lines of Github Events encoded in JSON. There are a bunch of EventTypes like ForkEvent, IssueCommentEvent, ReleaseEvent, DeleteEvent, WatchEvent, and so on ...

You can find the complete list of EventTypes and Payloads here.

This maybe looks little but if like me you import all these 4 events for a period of 1 month, you'll end up with about 2 million nodes created and 4 times more relationships.

I've created a simple library in PHP that parses these data files and import the Events into the database.

Each Event is handled with a dedicated EventTypeLoader that produce the Cypher Query for the import.

The library is available here : https://github.com/kwattro/gh4j

I would like to clear up that the way events are imported are proper to my intentions of data manipulating, you can always modify the code to reflect your needs.

Also, be aware that it is not compatible with the ReST API events as the payload are totally different.

Informations specific to all Events

There is Common Payload for all Events, the User creating the event and the EventType, each Event will create a Node having the name of the event as a Neo4j label.

You can also guess when the PR is closed if it is a MERGE/CLOSE or a single CLOSE by looking at the merged_at key.

The PullRequestEventLoader will import the payload in the following schema :

Same here, ForkEvent Payload gives you some informations but not so much, for e.g. this does not give you the id of the newly created Repository (a Fork is also a repository).

So in order to have a uniqueness reference for matching/creating/retrieving forks, I decided to use html urls of the Fork/Repository as an identifier and this information is available in the payload.

As the ForkEvent, the PushEvent does not provide quite useful informations, you can still build a little schema.

This will produce the following Neo4j Graph Schema : 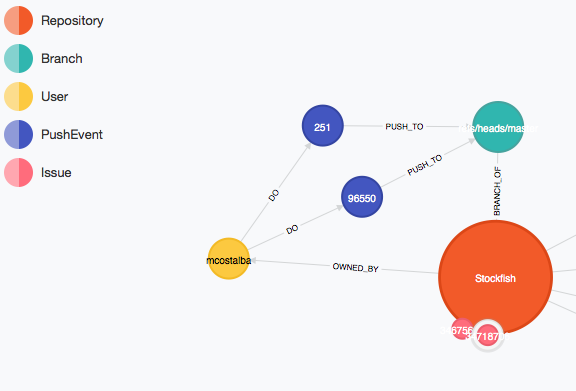 And the last one, IssueCommentEvent. There is a check in the code of the IssueCommentEventLoader that detect if the Issue on which the comment is done is related to a PullRequest, this will when true create a BOUND_TO_PR relationship from Issue to PR.

Giving up the schema :

Ok, the boring part of explaining how the data is imported is done. If you've uploaded a bit data for 1 or 2 days you can end up with already a really intersting graph.

Who did the most events ?

Which repository has been the most touched

Which repository has been the most forked

Which repository has the most merge PR's

As you can see, it is simply with Cypher as you just need to draw on a paper or whiteboard the path you want to return.

How many Forks are resulting in an Opened PR ?

You just need to analyse the nodes and connections between the ForkEvent and the PR Event and translate it into Cypher.

Here is a visual representation of the complete Fork -> PR_OPEN scheme : 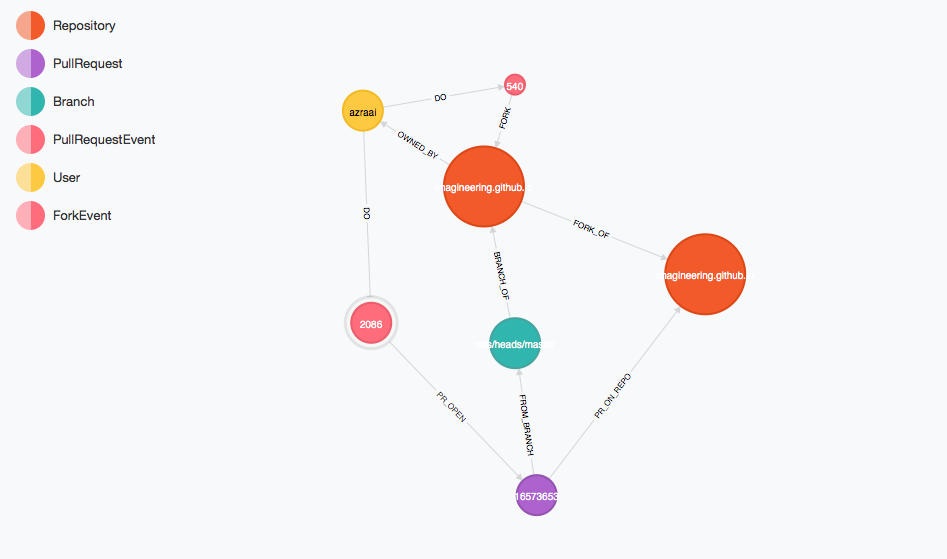 What is the average time in seconds between a Fork is done and a PR is opened?

There is not much changes with the previous query, we just use the avg function on the difference between the PR Opening time and the Fork time

We can extend the query to know the average time until the PR is merged.

What is the average time in seconds between a Fork and a PR is merged?

What is the average number of comments on a PR before the PR is merged?

Which User has the most MERGED PR's on Repositories not owned by him?

Relate together Users having Merged PR's on same repositories, could serve as Follow Recommendations Engine.