The Hitchhikers Guide To The Shelley - Chapter 1 - The Network

This chapters covers the information about the underlying P2P network of Shelley's ITN implemented in Jormungandr.

The very simple explanation of the poldercast network relating to jormungandr.

Every nodes that are joined to the Jormungandr network maintain as many views (Rings view) of the network as as many topics they're subscribed to.

These views (Rings view) are a form of rings (Topic rings) and each of the rings connects all nodes that are subscribed to that topic (and just only them). The nodes in the rings are linked to an other based on the sorted node_ids.

In jormungandr, all nodes are subscribed to the both topics, therefore each of them maintain 2 per-topic rings, and therefore the jormungandr overlay is built from these 2 topic rings (and from other nodes that are joined to the network), see an example below.

Note: In simple words: The jormungandr overlay, is a node_id (as sorted by node_ids) based circular linked list that contains all of the nodes that are joined to the network. 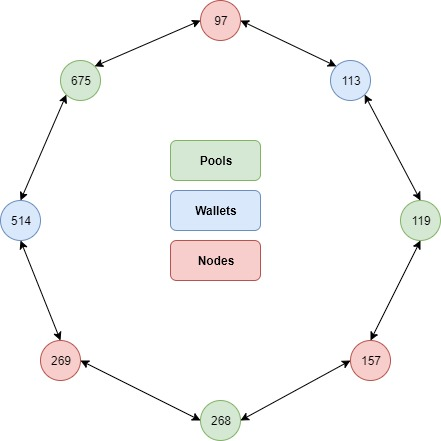 This overlay contains two rings (it's like a horizontal overlay) the overlay rings (rings that are layered on top of another ring, so like a vertical overlay, explanation later), the Blocks and Messages overlay rings.

Building overlay relies on three modules that maintain thier own view of the network, managed by separate gossiping protocol (one per each module), which gossips periodically, asyncrhonously and independently:

Brief responsibility of the modules:

Therefore, each nodes in the network maintains a view of each of the module's

Note: the three gossiping protocols are executed continuously, due to nodes departing or joining, crashing at any time (even changing thir subscription) there is no notion of final convergence. Instead, nodes engage in a constant convergence process. In jomrungandr, it's 10seconds.

Also, each modules maintains its

Imagine a very big ring /w thousand of nodes. Every node has two links, one to the next (successor) and one to the previous (precedessor) nodes. And they, just communicate to these two their direct neighbours in this layer. It's similar to the old IBM Token Ring (802.5), but the main differences is that Poldercast Rings' communication is bidirectional.

Note: It's a bit more complex, but I do not want to deep dive in now, for the sake of simplicity.

It is collecting the nodes with similar interests for

Imagine the above ring in Rings. Vicinity collects all the nodes that are interested in the specific topic e.g. in Blocks, and passing to the Ring to build it's Ring view and creating links between some random nodes that are not direct neighbours.

As the above topic ring as an example, it maintains the connections between nodes and providing random links (shortcuts) to these arbitrary nodes.

Rings's module responsibility is to discover the node's successor and precedessor of the topic t, by initially considering few existing random links to arbitrary subsrciber nodes, and periodically gossipping with them for the gradually closer t topic's subscriber ids.

The Rings module manages the ring links and tries discovering a node’s successor and predecessor for each topic in its subscription, and at quickly adapting to new successors/predecessors in dynamic networks.

So, each node maintains their ring neighbors for each topic in its subscription (ring/2 with lower and ring/2 with higher id, default=4, i.e. 2 of each) and periodically picks a node for gossipin from its Rings view. The picks based on LRU selection policy, that plays an important role in churn handling.

Then the two nodes exchange up to gossip size (10) neighbors to help each other improve their Rings views.

For example how it, probably, works in jormunganrd:

Ideally, they should just need two links, the direct ring links (precedessor's and successors), but this above helps to pick up some fail-safe ring link on sucessors/precedessors failure and/or churn and also have.

Vicinity module is responsible for feeding the Rings module with the a few neighbours (for each topic) of arbitrary ids. This feeding mechanism is based on some proximity function that are trying to discover each node's closest other nodes. This proximity function is based on the rank i.e. number of topics that two nodes share.

In other words, it's responsible fro maintaining interest-induced random links between nodes that share at least 1 topic and propagated events to arbitrary subscribers of a topic.

This links are the input to the Ring module.

For example how it, probably, works in jormunganrd:

Is a lightweight peer sampling service, providing each node with a continuous stream of neighbours chosen uniformly at random from the whole network, whihc is essential for keeping the whole overlay connected while enabling flexible overlay maintenance in failures and node churn.