This Gist contains additional information about the studies presented in "Teaching Tech to Talk: K-12 Conversational Artificial Intelligence Literacy Curriculum and Development Tools" at EAAI 2021 (focused on learning outcomes) and "'Alexa, Can I Program You?': Student Perceptions of Conversational Artificial Intelligence Before and After Programming Alexa" at IDC 2021 (focused on student perceptions of Alexa). There is also a video demo of the work.

The EAAI (learning outcome) study can be cited as follows:

The IDC (Alexa perceptions) study can be cited as follows: 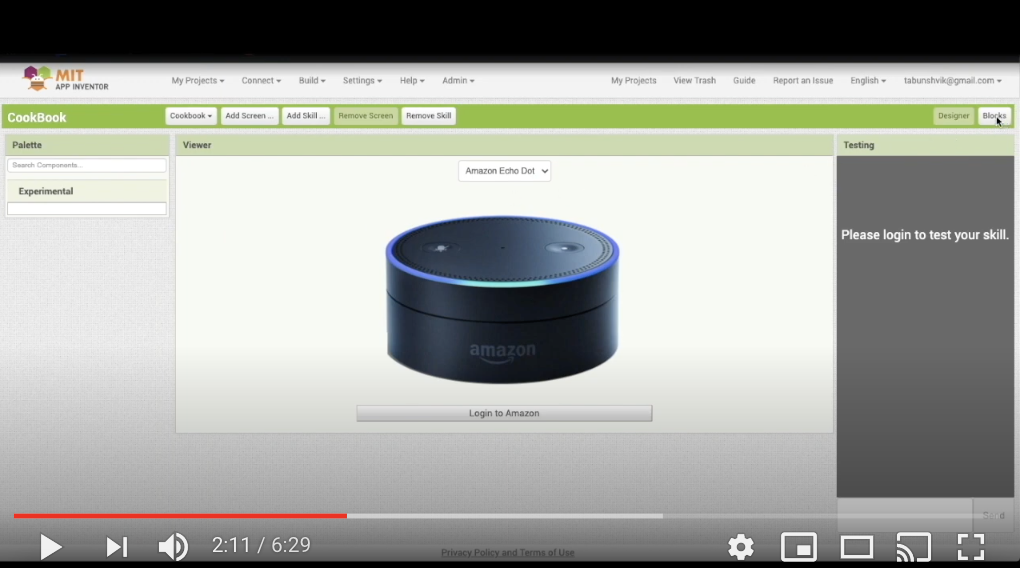 We created a sample skill to show the motivation behind the conversation AI interface and demonstrate how it may be used by students to build their own projects.

This skill is a talking cookbook: You can ask your skill what ingredients you'll need for a recipe, and you can ask for step-by-step instructions on how to cook or bake a given dish. With each new step, the skill also notifies the accompanied app to display a visual aid to the user that shows them how to do the step they're currently on. Below, you will see a more detailed explanation of how to app works and how the interface facilitates this project using block-based coding.

Figure A: The Designer page on the main App Inventor interface. Here, a user can drag in Components that they would like to include in their app, which in this case is a Label, an Image, and a CloudDB component. CloudDB is a redis server hosted by App Inventor on the cloud. Users can also upload files to use in their app, such as the different images that they would like to use to show the user how to follow different recipes.

The app side of the code stores two dictionaries with predetermined recipes that the programmer included in the project while building it: one for the steps of each recipe, and another that stores the names of the image files that demonstrate each step. Next is a CloudDB.DataChanged block that is evoked any time some data changes in the user's CLoudDB. This data will come from the skill. The app will then store the data changed in global variables within the app, and if the data changed happened to be a new step_number, then the app updates a label and image object to represent the recipe and step that the user is currently on. 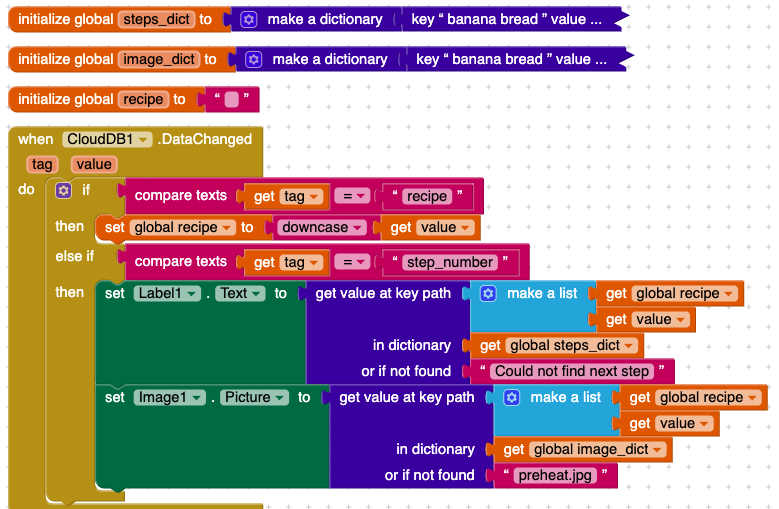 Figure B: The blocks for the MIT App Inventor app that accompanies this skill.

The skill side of the code defines the Voice User Interface for the programmers's skill, as well as the endpoint code for each intent. Here, you can see that the user has defined three intents: firstStep, nextStep, and ingredients. These intents include a slot of type Food to store information about which recipe the user is interested in. To the right are the endpoint blocks for these three intents: each when intent spoken block will be translated by the interface into a JavaScript function that Alexa can understand and execute. The ingredients intent simply finds the appropriate list of ingredients in the global ingredients_dict, translates it into a csv string, and speaks it with some extra text at the beginning to turn it into a full sentence. The firstStep intent stores the value of the recipe slot spoken by the user in a variable, sets the current step number to 1 (App Inventor uses 1-based indexing), and sends both of these values to the user's CloudDB to notify the app that it needs to update its display to the current step. Next, it finds the first step for the given recipe in the global steps_dict, and speaks it to the user. Finally, the nextStep intent is very similar to firstStep, the only difference being that it increments the current step number by 1, and does not store any information about the recipe because it assumes that it has already been stored when the user asked for the first step. 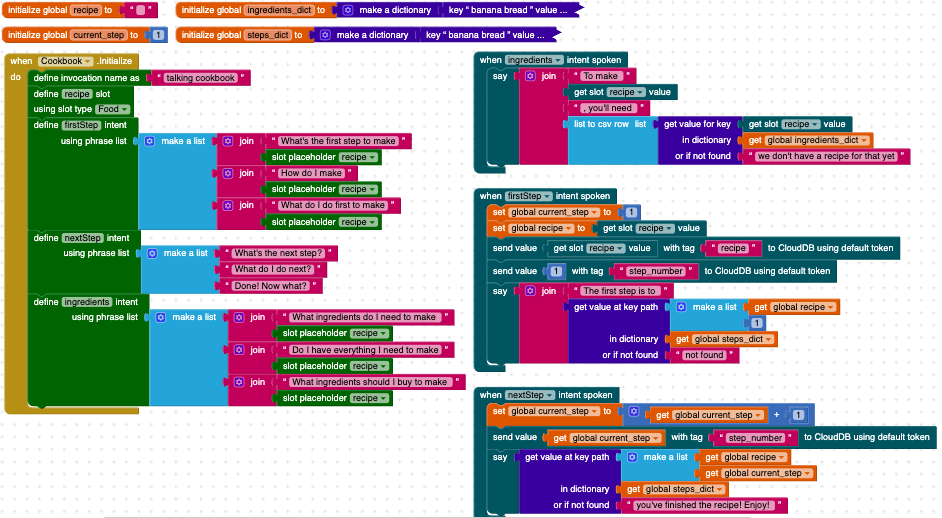 Figure C: The blocks for the Alexa skill for Sheila's Cookbook project.

Tutorial - Talk With Me

Slides - What is AI and Conversational AI?

Slides - ML Behind the Scenes and LSTM

Slides - Alexa Talks with your Phone

Through a reflexive, open-coding approach to thematic analysis, we identified codes for each of the study's questions. Representative quotations from each of the codes and histograms of the data follow.

Day 2, 3 & 4: What was the most interesting thing you did or learned in today's class?

Perception of AI Question 1: Describe in your own words what AI is.

Perception of AI Question 3: Describe in your own words how conversational agents (like a chatbot, Alexa or Google Home) decide what to say.

Day 2 Question 1 a.: In your own words, what questions might you ask your friend to figure out whether the agent is actually AI?

For context: Your friend says that there’s an AI integrated into her fridge. Apparently, the AI knows what’s in the fridge, and your friend can use it to order food that’s not already there.

Day 2 Question 1. b.: In your own words, what questions might you ask your friend to figure out whether the agent is conversational AI?

For context: Your friend says that there’s an AI integrated into her fridge. Apparently, the AI knows what’s in the fridge, and your friend can use it to order food that’s not already there.

Questions about AI, but not Conversational AI

Day 4 Question 1 b.: Why would or why wouldn’t Alexa recognize “Give me a math joke”?

For context: Let’s say you gave Alexa three phrases for an intent,

Day 4 Question 1 c.: What do you think Alexa would do if you said “Give me a math joke”?

For context: Let’s say you gave Alexa three phrases for an intent,

Some other math joke

Personalized to the user

Conversation to explain the answer

Can give the wrong answer

Time to build the agent

Post-questionnaire Question 2: Name a few decisions (2-3) you made when designing your conversational agent. What are some other decisions (1-2) other developers might think about when creating AI systems?

Post-questionnaire Question 7. If you could design the next version of Amazon Alexa, how would you change it? What features would you add? How could it be improved? (Feel free to think outside the box!)

Post-Questionnaire Question 7. What was your favorite activity and what did you enjoy about the workshops? What was helpful for learning? (As well as a question on students' final project slides.)

Easy to set up

Teacher Experience Question 1. Did the material in this course change your opinion about AI, conversational AI or teaching AI to students in any way?

Teacher Experience Question 2. Do you feel like you gained a better understanding of conversational AI through the workshops? If so, in what ways?

Better understanding of AI in general

Teacher Experience Question 3. What is something new that you bring to this course or would like to add to it?

Teacher Experience Question 4. How engaged were students in the course material? Were there particularly engaging portions of the course?

Teacher Experience Question 6. What were the most important skills and ideas that your students learned in this course?

Teacher Experience Question 7. What parts of this course would you bring to your classroom and what would you leave behind?

Teacher Background Question 1. How comfortable are you teaching computer programming and technology concepts?

Teacher Background Question 2. Would you describe yourself as tech-savvy?

Teacher Background Question 3. Have you ever taught your students about AI or Computer Science?