Custom CSS is the path to inconsistent UI — Artem Sapegin

The way to unify styles is to create a design system, that will specify colors, font sizes. These elements are called design tokens. Using limited number of design tokes enforces consistency.

Tokens should also make sense, for example when defining colors, you should define text and background colors together, in order to maintain contrast ratio and keep the text readable.

The number of tokens should be minimal to reduce number of unwanted deviation.

On the higher level we have components. But they should be configurable

With these tokens it is still hard to achieve consistency.

Why primitive tokens as components

How to build a maintainable interface

Spacing is important to build maintainable layout. Even on a small piece of interface there can be various spacings.

This approach allows you to compose complex layouts from simple and explicit levels that are easy to maintain and join together.

Composition exposes you an API very close to the actuall CSS-grid properties. It should help you to learn the approach, not just a tool.

Composition component will own spacing, and then you will be using other components to define visuals:

We can also use advanced properties from css-grid, like auto-fit or minmax to have nice responsive layouts.

Using extra props like paddingMd or gridGapLg we can add overrides for a certain viewport size.

Typescript adoption is growing in JS community accroding to the State of JS survey.

Design system is similar to Typescript. It also give you a contract. A contract for UI components, if you have a Button, you know that this is a button and works as you expect. With design system you can build UI with confidence.

There are many design system building tools, like react-styleguidist. What if we will give them a power of Typescript?

Monaco editor – the core part of VSCode. We can bring it into Styleguidist and make code examples editable with autocomplete based on our types information.

How is this built? We use transpile to convert TS to JS and then evaluate it inside of the error boundary:

Monaco editor component. It does not have ready-to-use react component so we will build one:

Monaco has an abstraction to work with file system, where we can provide a custom adapter to have auto-complete for import paths in the browser.

Monaco is an awesome library, very easy to get started, they have good getting started guide in their docs: https://github.com/Microsoft/monaco-editor/blob/master/docs/integrate-esm.md

We can create virtual modules for auto-completion via

How can we get started with a big legacy code base very quickly?

React? Does not really help. You still have many components that do not have clear relationship. Where is this component actually used?

We can add special comments to our code to annotate certain product features to simplify navigation. We can see user flows and how they are represented in different parts of the source.

We can add extra information to our chart that should help contributors to get started with the codebase.

Cons of this approach

Pros: We own the frontend and can use all modern techs and approaches (React!)

For people who are not able to use JAM stack due to some special requirements, we offer a solution. We can build react widgets and then embed them into a classic CMS.

We provide a script with configuration via data-attributes that will be picked up by React-union runtime. Initializing the root union component:

All your widgets will have a shared react context where you can store theming, localization and other config.

We have adapter for popular CMSes so our widgets can be added to pages using standard CMS mechanisms, for example drag-n-drop or Gutenberg widgets in new WordPress.

React-Union widgets use the same Redux store. If we want, we can scope our data using namespace that is injected into our widget. React-union gives you helpers to register reducers into the global store.

Releasing a library written in TypeScript on NPM — Christoffer Niska

We publish files processed via rollup. Rollup is more recommended for libraries, since it does not produce extra runtime, just builds modules together.

React Native developer menu has "Performance monitor" feature. Using this monitor we have found that our bottleneck was in the JS thread. We looked into flamechart provided by RN Dev tools (custom version of Chrome dev tools). We have found unnecessary full-renders that took ~5s of JS execution.

Possible optimization: shouldComponentUpdate. Leads to possible bugs, because it is out of sync with the state of the render method.

Optimize reconciliation: react detects changes by shallow properties compare. We can optimize it by not producing new objects if content does not change.

Sources of new instances when nothing changes:

In the modern era Javascript is also a very popular compilation target for other languages. Compiling from one language to another very high-level lang is not a good idea. We need a more low-level API. This should be solved by WebAssembly.

No. JS already plays important role in front-end. WASM is mostly built to make languages more suitable to be run in browsers.

Should we all use WASM?

WASM does not support any arbitrary JS object. Work with DOM still should be done in JS.

Rust supports WebAssembly as a first-class compilation target. They also provide bindings to Javascript to call Rust code from Javascript and Javascript code from Rust

It is very easy: shows a demo

Webpack has support for WASM. You can just import .wasm files into your javascript and call functions from there

The definition of tech debt is very vague 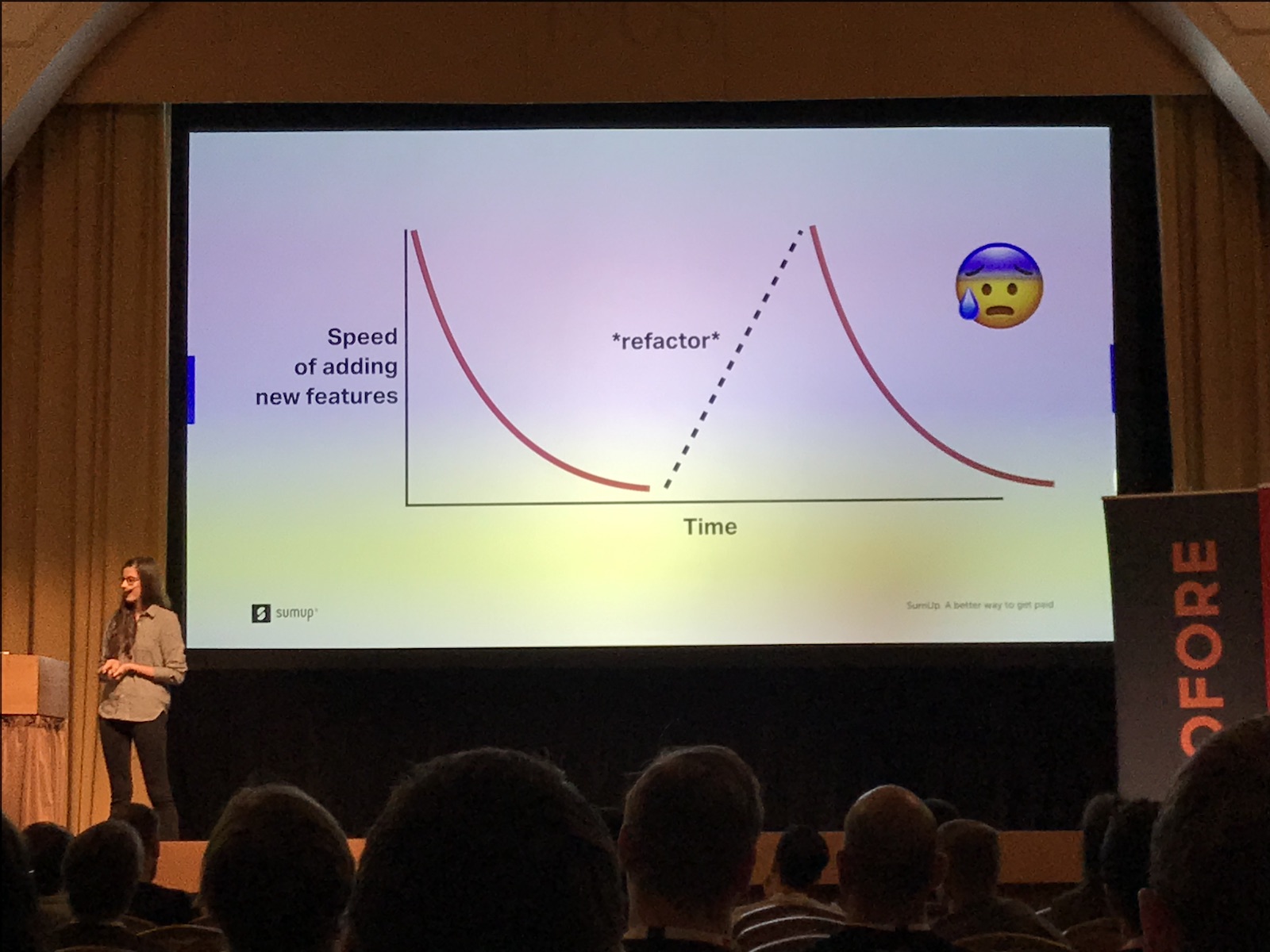 The real cost of a software is not an initial development, but the cost of maintaining it over the time.

How to write a system that does not require a rewrite

Another good set of constraints

Enables: predictable impart of changing a thing, avoidable cross-team conflicts In frontend it means that a single page should work independently, like other pages do not exist. Shared components should go into design system layer or you can copy-paste them otherwise (DRY is overrated).

Constraint: be conservative about code reuse

Code-reuse sometimes leads to brittle and over-engineered code. It also impacts the time to develop, because new requirements affect shared components if they were not truly reusable. When you have half-full and half-empty glasses, sometimes you just really need to glasses.

Not every similarly looking code should be merged for reuse. There is a forbidden dependencies tests. They check the structure of the modules and check for unwanted dependencies to ensure clean architecture.

Every time you create a function or add a feature, they all are architecture decisions that affect maintainability of your code. Make these decisions wisely and consider constraints above.

There are many technologies that people are struggling with.

Typescript – typed superset of Javascript. Or maybe not?

Redux – confusing at the first look

There is a common pattern to explain everything as "simple". We mistake familiarity for simplicity. After some time spent with a technology you are loosing tracking what is technology specific and what is a general knowledge.

Spiral of silence – people have a fear of isolation. People are afraid of saying unpopular opinion in a fear of being excluded from a community.

Increased Empathy. It is especially important in education.