For almost a year now, I've been using this "flux" architecture to organize my React applications and to work on other people's projects, and its popularity has grown quite a lot, to the point where it shows up on job listings for React and a lot of people get confused about what it is.

Why I'm tired of using and teaching flux

There are a billion explainations on the internet, so I'll skip explaining the parts. Instead, let's cut to the chase -- the main parts I hate about flux are the Dispatcher and the Store's own updating mechanism.

If you use a setup similar to the examples in facebook/flux, and you use flux.Dispatcher, you probably have this kind of flow:

No wonder there are tons of questions about flux, because seriously, what the flux is this? And if you think this is just extra information nobody cares about, guess what you have to think and worry about when you need to have all of the separate store states come together to make up your whole application state? When you have one store update that then triggers another action to update another store? Or you could also just add an event listener to that Store's emitChange so that you can update your dependent store and emit a change event too.

And so at the end of the day, all the store does is use its callbacks on the Dispatcher to receive actions, act on them, emit its own events to consume itself, and then call callbacks which call methods on the Store to update your components.

I haven't seen any flux library implement anything that doesn't look like this. It may not use flux.Dispatcher (though most do) or EventEmitter (though, a lot of them do also), but they almost always come down to this same system, and the only benefit they provide is that you don't have to provide your own Dispatcher or Store implementation (in which you consume theirs, which almost always works in the same way).

Did I mention I also hate how you're supposed to load up your application state? Most of the time, you don't want to render without having your Store's state, so you have to use getInitialState to do it. What ends up happening, inevitably, is that you end up with a method called getAppState which does return Store.getAppState() and you use that in getInitialState and your onChange handler which probably is this.setState(getAppState()) and will get called back like so in your Store. Ugh.

So instead of all that crap we get in our flux setup, let's just use RxJS. A few things you'll want to know:

A note about using ReplaySubject

Instead of doing the awkward thing of figuring out how to load up our application state and then observe our stream, I think we should just use the ReplaySubject with a buffer of 1, i.e., when we subscribe to this, we want the latest value sent to us to use it as if we are getting fresh data from the stream.

For our simple example, I'm just going to build a clicking application.

For a variety of reasons, we want to use keys to identify Intents to our Model so it can handle data changes appropriately.

Seting up our Intents

Instead of using a dispatcher, we're just going to provide a stream of user Intents and let our Model handle them as necessary. I'm just going to use a ReplaySubject since it's easy enough to use, though we will likely never need a replay.

And so you can see that when Intent.incrementCounter() is called, our subject will publish a payload.

Setting up our Model

Now comes the interesting part, where we need to subscribe to our Intents so we can handle them appropriately. This is so easy, it's boring.

And so we can see that the Model has its own ReplaySubject(1), and handled intents will make our subject publish our new application state.

Setting up our root component

So our Store was dead easy to set up. Surely, there's going to be a lot of work to set up our root component, right? Well, I really hate having to mess with component state, so I decided to just shove it all into props instead.

Model.subject is a Rx.Observable, and by using Rx.Observable.prototype.subscribe, we are able to subscribe an observer which renders our application using the appState data published to it. And because we used a ReplaySubject(1), the initializing subject.onNext(state) in our model plays back, rendering our application. This part is pretty boring too, since we didn't write much code at all.

In the end, it looks like this (after clicking the button some): 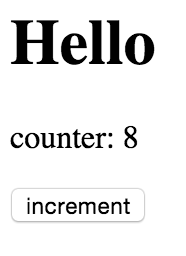 Let's look at some other demos since this was so short and boring.

What if we have multiple Models that we need to subscribe to in order to get our application state? Well, in that case, we do need another Model and its stream.

But how do we handle the logic for combining the two streams? Well, time to call Rx.Observable.combineLatest:

As we can see, we can just use RxJS to take the latest data from all three and combine them into a new Observable to feed into our Root component: 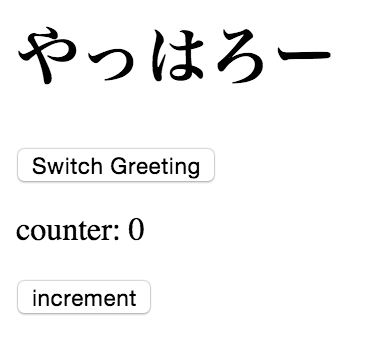 Let's do another since this one was pretty short too.

This one is pretty annoying for me currently, setting up a store that only does logical operations, and then having its emitChange trigger another store that does calculations based on it.

That filterEvens will get switched between true and false, for filtering out even values (of course, in the real world, I have a list of predicates that will go through a big list to figure out what gets rendered and gets unmounted).

Turns out, this is one of the most common operations in Rx. To write a transform that applies to each published event, we end up using Rx.Observable.prototype.map:

Again, we get a new Observable that we then subscribe to in order to render our application with the filtered data: 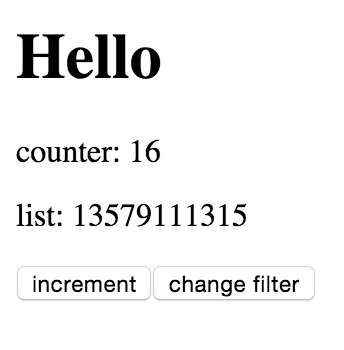 I know I probably turned some people off talking about how much I hate flux when it's honestly done a lot to change how people think about data flow in their applications. For that, flux remains quite significant to me and I think it's done quite a lot of good, but I am no longer content to use it to manage data flows in my applications. If you think otherwise, I hope you might consider taking the time to write to me on why you think I should change my practices when using flux to make it a more enjoyable and productive experience.

Otherwise, if you were intrigued by the use of RxJS and want to see the source code for this article, see the repo here: https://github.com/justinwoo/react-rxjs-flow

If you made it this far, thanks for reading!

Do you have thoughts about using a Rx.Subject for each intent rather than using the intent keys system? I did the keys-based system for this demonstration, but I'm still on the fence about whether or not I'm going to use keys to identify payloads or use separate subjects. Let me know on twitter what you think!

I pushed another branch that gets rid of the Keys-based single subject with multiple subjects that can be subscribed to here: https://github.com/justinwoo/react-rxjs-flow/tree/each-intent-subject. Seems pretty nice, thanks to @saneyuki_s for the suggestion.

A lot of this is very early rough drafts of how you might use Rx for your data modeling. A lot of the time, if you need a stream with a initial value that you use but then gets updated (like window size, etc.), you might/will probably be better off using the .startWith or .just operators instead of Subjects. Regardless, I hope you find this a little bit useful to thinking about new ways to do things ;)