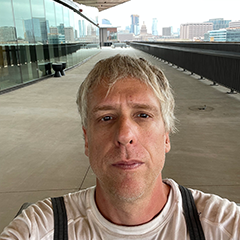 (An Enterprise Proposal, something I've been kicking around awhile, now re-iterating)

About me in this story...

I grew up in the 80s, largely in Michigan, athletic culture, laid back. We got a PC XT with monochrome (amber and black) monitor. I played Falcon. Have been obsessed with simulation since then. Really it's the only thing about computers that really excited me. Contrarywise, I thought and think AI is bullshit and hype, obscuring some genuine utility in the neural nets, viewed as maps of data terrain. Roger Penrose nailed that one, also Noam Chomksy in "Language and Thought" (Anshen Lecture Series) makes similar, and powerful in generality arguments. I was never into the web hypes, other than the utopian library of alexandria type ideas -- I remain committed to that -- I'm talking about the hijacking for corporate commmercial, oligarchical, society-parasitizing/predating interests. Commerce is good of course, and internet has been great for t

Some thoughts about returning to thinking about combined-arms warfare

Dug in, dug out, blown away with the wind...

(an idea from 2014ish, need to go through some multiple passes with the brainstorming thing)

Keystone: [ call it this or something else? This.]

You have been given a data file containing a list of known non-local metaparticles.

The format of the data file is an array of interleaved structures representing the following data for each record: