In this document we present a protocol to deliver miners shares from a decentralised mining pool. The shares are delivered with proof of ownership and once delivered to a buyer they can not be delivered to a different buyer, i.e. we prevent double spends. The buyer can further sell the shares following the same protocol it uses to buy the shares.

For the sake of this document, we assume we have a DAG of shares generated by miners and publicly visible on a peer to peer network. We also assume there is an accepted rewards distribution algorithm based on the DAG of share. See BraidPool Proposal for the current status on the proposal for these.

The shares from a decentralized mining pool are referred to as Tera Hash Coins, TH Coins or Shares interchangeably in the rest of the document.

To provide transfer of TH Coins without double spends we build on ideas of Single Use Seals, which is also being put to use in RGB and the RGB-LNP specifications.

To transfer TH Coins from miner to a market maker we use a PayJoin transaction. This enables atomic delivery of TH Coins by miners.

When delivering the shares to a buyer, the miner has to prove to the buyer the following two properties:

We describe the delivery protocol in the next sections and show how the protocol provides these properties. First we describe the structure of a TH Coin or a Share.

A share's header contains all the details required to build a DAG but for the purposes of the protocol presented here we focus on the components that help with the delivery of shares. A share header includes a 'Share Seal' that prevents a miner from double spending the share coin.

Before a miner broadcasts a share to the decentralise mining network, it can optionally add a 'Share Seal' to the share's header. This Share Seal is a bitcoin UTXO that the miner has to spend as a part of the protocol to deliver the share to a buyer. We call this a Seal, since that is terminology used in Single Use Seals. 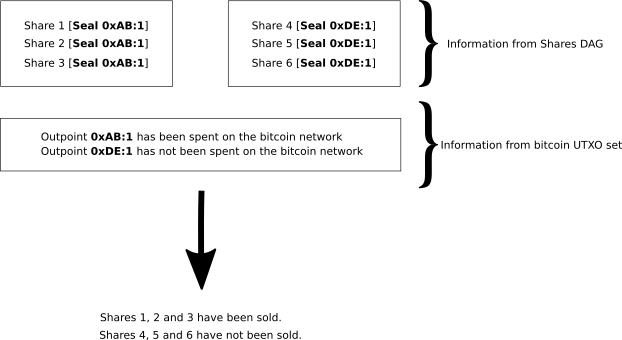 The figure above shows how we can determine that shares have been sold or not. The shares 1, 2 and 3 are sold as their Share Seal has been spent and is no longer in the bitcoin UTXO set.

When a share is found by a miner, the share is broadcast to the p2p network so that the share can be included in the DAG of shares.

Recall that making sure that other miners in the DAG have your share is how miners can make sure they get rewarded for the share when the next block is found. See BraidPool Proposal for details.

The protocol can be described as consisting of three phases:

Before a miner starts mining shares it generates a UTXO and makes sure this UTXO is not spent up to the time of selling shares to a market maker. A miner can deliver as many shares as they want with a single UTXO as long as they included the UTXO as the 'Share Seal' in the Share Header.

When a market maker sees the Share Seal UTXO_1 spent on the bitcoin blockchain it knows that shares using UTXO_1 as a Share Seal can no longer be delivered to any other market marker.

The figure below shows how a miner includes 'UTXO 1' as a Share Seal in Shares 1 to 8, and therefore is selling those shares as part of the bitcoin transaction.

The Miner also proves the ownership of shares as the miner that used UTXO_1 as a Share Seal is able to spend UTXO_1.

The above delivery protocol doesn't guarantee atomicity. A buyer can receive shares from a miner and refuse to deliver the payment for the shares.

The above sequence works to build a PayJoin transaction with the only extra details in Step 3, where the Miner must spend the Share Seal and must include the Buyer's Seal in the op_return of the output sent to the Buyer. 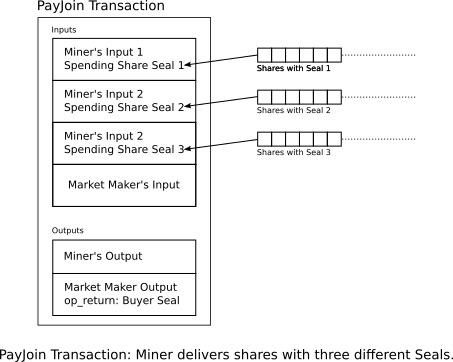 No double spend: The spending of the Share Seal marks the shares as spent. When a buyer receives the list of shares in Step 1, it can verify from the DAG of shares that they are valid. It can also check that the Share Seal UTXO hasn't already been spent.

The Miner can construct concurrent PayJoin transactions with multiple Market Makers, but only one of the transactions will be accepted on the Bitcoin network.

If we want to support the ability for buyers to sell TH Coins to other parties, we can support that by extending the Seal analogy. Once the Market Maker has owner of shares by virtue of the data in the op_return of the PayJoin output, we can extend the protocol easily enough to recognise this ownership and then transfer ownership to a secondary buyer in a new PayJoin transaction.

The RGB protocol builds on Seals to provide off chain assets and we could use RGB to build the decentralised mining pool's shares delivery mechanism. However, RGB is not yet ready for production use and it might be a few years before we can use it.

There is a question on how the system might scale if each miner has to broadcast a bitcoin transaction to deliver shares. There's two responses to it:

We can switch away from using op_return and instead use the "sign-to-contract" commitments to transfer ownership of seals from Miner to Market Maker. These types of commitments are also used by RGB to record transfer of asset ownerships. However, we can use op_return an MVP of BraidPool and then switch to more advanced commitement systems as users demands.

In this document we outlined a protocol for Miners to deliver TH Coins to a Market Maker. The protocol builds on the idea of Single Use Seals and doesn't require a new blockchain to manage and track TH Coins. We believe that enabling an economy of TH Coins right on top of the Bitcoin blockchain reinforces the utility of Bitcoin, while providing a much needed tool for miners and market makers alike.