This guide is slightly opinionated, as it is influenced by my own playstyle as well as the opinions of people I play with on "how to play the game". Therefore DEF is usually not prioritized, though I will try to provide decent alternatives which provide more defense without sacrificing too much in the offensive department.

Most of the sets listed here will force you to diversify your armor-proficiencies, as there is no set-combination listed here which is of only one armor-type.

Credits go to NaygetivReign for providing the original Sword Vella gear guide and also for teaching me the game.

How to go about gearing up

Whenever you get to a new tier of gear you need to first look at your weapon. Most of the time you will want to upgrade this as soon as possible (exception is when you reach 70 and 80). Then you go about getting the armor pieces and finally the accessories.

Your priority before reaching the level where the new gear will be available is to save gold and spend AP on core-abilities while saving up enough AP to get the relevant equipment masteries once you reach the next tier of gear.

Up to level 60 you can use anything for equipent, upgrade weapon periodically but armor is not much of a priority before then. At level 70 you will want to get a weapon and then scrolls for the weapon before proceeding with armorpieces.

Recommended: The White Shark + Swift is a cheap set which gives the most STR and is also a very good choice for continuing with a level 70 set. It has a bit less armor and requires proficiencies in Plate, Heavy and Light armor.

Recommended DEF: Full Apocryphal set; has good STR, one light piece and lots of plate. With scrolls this can hit 8-9k DEF if you really need it.

Glass Cannon: Apocryphal + Champion Leather; four light pieces, put Well-Balanced and Enthusiastic on all of them and you have the best end-game set in terms of STR/ATT/BAL/SPD, surpassing even level 80 armor. But this comes at the cost of almost all of your DEF.

A comment on Everlasting Scale; only get it for the looks, the stats are surpassed by the cheaper Nighthawk + Apocryphal combination in both STR and DEF.

Here it really starts to get expensive. To upgrade from the previous tier of armor you need at least somewhere around 50kk to actually get an improvement. Recommended is to skip this part until you have gotten your hands on a scrolled end-game weapon and decent accessories (maybe scrolled), the armors for 70-80 work completely fine in end game PvE and PvP. An upgrade here is just to improve quality of life, and is not a mandatory upgrade in any way.

Your choice of weapon also factors in as it will restrict your armor-type choices as you might need Well-Balanced + Enthusiastics to compensate for a low BAL (which is usually the case if you are using Dual Blades over Twin Swords, but also if you choose Noblesse Twin Swords). But there is no reason to go for a full plate/heavy set, as that will definitely ruin your attack speed, balance and/or critical chance while only giving you something like 20-30% damage reduction.

I will take my Vella as an example with my accessories and weapon, to give an idea of what the armor allows. The gear will be entered into this gear simulator, scrolls added to get the highest overall power and then enhanced to +10, that is where they will be compared. No infusions will be used. But the scrolls really compensate a lot for what you lack in terms of ATT/BAL/SPD/DEF, so the differences between the sets might not be the same for you as it depends a lot on the accessory scrolls.

As of this writing, my Vella has +10 Relentless Maelstrom Skeleton Twin Swords, 2 Thunder Rings, Emerald Belt, Ruler's Brooch and a Shield Badge. The armor is the White Shark + Apocryphal shown above for Levels 70 - 80. I will be adding an artifact somewhat soon, so that is also taken into account.

For the overall power I have chosen Kraken head as the target, as it has both high DEF and high crit resist. The damage to a target with lower DEF and crit resist will be influenced more by speed than ATT and crit.

As you can see, the differences between these sets once they are fully scrolled are not that great in terms of overall power, which means that your weapon will most likely affect the combinations more than the actual set itself (besides Apocryphal + Champion Leather). So it all comes down to a question of taste regarding playstyle, stats and looks.

And just for fun I entered my current set and added scrolls on it, which is not an end-game set:

Comparing the overall power between a fully scrolled version of my current set with Apocryphal + Champion Leather glass-cannon build gives about 9% more DPS (not actual DPS, does not take pauses to recharge stamina and to avoid attacks into account, nor does it account for the attack-speed break).

So upgrading from level 70 armor to endgame is a very expensive upgrade for at most 10% DPS, most of the sets above only give about 5-7% more DPS. Compare that to going from +10 to +11 on your weapon which is pretty much a guaranteed increase of 10% or more DPS.

In my opinion a twin sword wielding Vella needs balance, speed, crit, attack and range, in that order. Balance is slightly more important than crit, mainly because twin sword Vella's bread and butter move, second smash + Gusty Blade can only crit on the first parts, while Gusty Blade is incapable of critting.

The unimportance of range come from my own opinion that Vella is supposed to be glued to the boss as long as she is not recouperating stamina. Then range does not matter that much, as every attack will hit anyway. As for dodges, neither Wind Step nor Cross Cut is affected by range, which means that the only move where Vella has a use for range is her 4th smash; Menacing Gale and Deadly Storm which both can move her quite a bit. 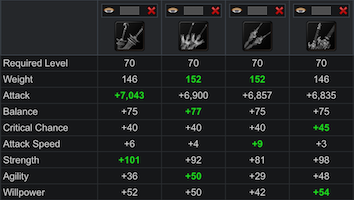 Benediction is not a bad choice either, but the +5 crit on the Infinity Twin Sword increases the damage more against most enemies.

A +10 scrolled level 70 twin sword should be more than enough to clear level 80 raids without much of a problem, giving you around 15k+ ATT. Though the higher stats on level 80 weapons make them worth getting as as they make level 80 raids a bit easier to both join and clear. 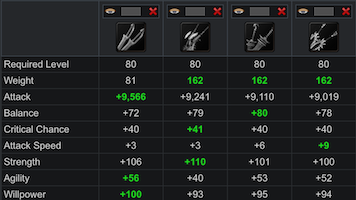 Heremon Twin Swords or Demain are not bad either, they have lower speed than Armageddon but gives extra ATT and/or critical.

For speed you should consider either Armageddon Twin Swords or Skeleton Twin Swords, with the trade being 200 ATT and 2 balance from the Armageddon compared to 1 extra speed on the Skeletons.

Avoid Noblesse Twin Swords because of their low balance and low attack speed. The balance is so much lower that it will take away the possibility of an extra Fast enchantment and will require lots of Enthusiastics and/or The Dead to make up for the lost balance (Using 2x The Dead instead of 2x Crescent Moonlight's will completely negate the extra ATT which Noblesse Twin Swords possess while not really compensating for the balance loss). 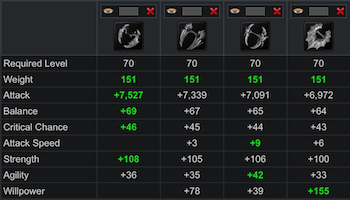 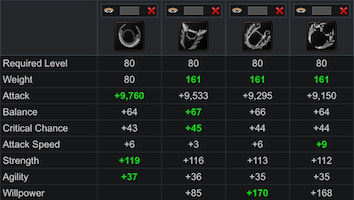 Recommended: Heremon Dual Blades or Prayer; well-rounded choices which also boost the duration of the Cold Heart buff (Heremons give a bit more ATT, BAL and crit, while Prayer gives more speed and a tiny boost to Cold Heart).

Even though the Moonlight Sapphire Brooch looks tempting with its 41 STR the two negatives on it (-1 speed, -1 crit) does not make it good. To actually outweigh these drawbacks you will have to enchant using two very pricey enchant-scrolls: Starlight and Incorruptible.

Do not use any scrolls before level 70. After you have reached level 70 your priority should be a weapon and then scrolls for your weapon. Armor scrolls and accessory scrolls should be considered as a whole before you start to apply scrolls to armor, though Well-Balanced and Enthusiastic are always good choices for armor.

Relentless is the hands down best prefix-scroll for twin swords, +4 speed, +5 balance and +3 crit chance. If you really want extra speed it is recommended to choose a different weapon instead of swapping the Relentless to a Leopard's.

The suffix is determined by how much balance and ATT you have. If you have really high ATT already (18k+), then a Valor can be the better choice as it allows for more attack speed stacking.

Dual Blades rely on attack speed to quickly stack the Cold Heart buff, and the speed also helps a bit during cold heart. They also have low balance, which means that they benefit slightly more from balance-increasing enchantments.

This is pretty straightforward, the scrolls listed here are the only real stat-enhancing scrolls you can get for armor. Take note of the different bonuses they give depending on armor type, light gives speed, balance and ATT while heavy and plate give DEF, HP and crit resist.

The chestpiece should always use a Master enchant for suffix (-BAL, +crit. +crit resist) because Vella is lacking in critical chance compared to Lann because the latter has a crit-increasing buff.

And if you can't get your hands on a Berserker scroll yet (or don't have any accessory you plan on keeping), put a Zeal scroll on the boots, the extra stamina regen helps.

The exact scrolls used on your accessories will be determined by your weapon, your armor and what scrolls they have, as the accessory scrolls can improve some stats which the weapon and armor are lacking.

For example, if you have high balance (over 90, which is the cap) then you add a Fast to convert some balance to attack speed. If your balance is low, you add The Dead instead which will increase your balance and reduce your STR and HP.