This is a proposal to supplement / replace the current SigOps (signature opcodes) counting in bitcoin, with a more sensible limit that is based on actual execution of signature checking opcodes. I will call this new metric "SigChecks". (please, let's avoid "real SigOps" or "new SigOps")

It is assumed the reader is familiarity with the NULLFAIL rule and the Schnorr multisig upgrade. Readers need not know anything about SigOps counting or limitations except that they are terrible.

During script execution, SigChecks are accumulated as follows:

(*) Implementations may use the undefined nature of old/invalid SigChecks to simplify handling. However it is recommended that the definitions provided here are used precisely as they can also gauge worst-case CPU consumption for pre-NULLFAIL scripts.

It is proposed that for a given transaction input, the number of SigChecks accumulated during script execution (scriptSig, scriptPubKey, and (if P2SH) redeemScript) is to be limited according to the length of the scriptSig, L:

See the rationale section for the reasoning behind making a per-input limit, and the reason for this particular formula.

Note that since transaction inputs have a minimum size of 41 bytes (36 byte outpoint, 1-3 byte varint for scriptSig length, 4 byte sequence number), this means the maximum density achievable is 1/36.6666 sigchecks per byte which occurs at L = 69 (three SigChecks) and txin_len = 110.

In terms of implementation, a per-input limit is easy to implement since the test can be done in VerifyScript, immediately after EvalScript has finished counting up SigChecks.

This per-input limit is proposed to be a RELAY RULE, i.e., it does not apply during block validation. The limit is to be checked only under the set of standard script flags.

At consensus layer, the existing per-input parallel checking system (used in ConnectBlock) makes it difficult to implement any kind of per-transaction limit, and so any consensus limits on transaction sigChecks are not recommended.

If the per-transaction or per-input rules are only adopted at the standardness layer, then an additional rule is needed at the consensus layer in order to limit the CPU usage that can be induced by a block.

Note that any block constraint (sigops or sigchecks) that varies with size creates an block assembly optimization problem where one resource (blocksize) is traded off against another (sigops/sigchecks).Therefore, it is proposed that the number of SigChecks be limited based on the maximum block size:

(Such a "flat" limit does not create significant DoS risk relative to a varying limit, since attackers can always pad blocks with large data transactions.)

In terms of implementation, the block limit is delicate to implement due to the script caching system:

Currently, there are the following rules on SigOps:

It is proposed that all of these SigOps rules shall be deactivated simultaneously when the SigChecks rules come into force.

Why SigChecks=0 for null signatures

This rule doesn't seem to take away any capabilities, but it also may seem like an unnecessary complication. My motivation for this is that I'd like to encourage script authors to write their scripts in the form:

The second form is malleable using the scriptSig argument to OP_IF, whereas in the first form the scriptSig must have either NULL or a valid signature from Alice's key and thus cannot be so easily malleated by third parties. The SigChecks=0 rule for false-returning opcodes means that the superior form (first script) doesn't have to pay an additional SigCheck in order to avoid malleability. In addition, there are many historical cases of using OP_CHECKxSIG opcodes in a return-False manner, and invariably these have quite short scriptSigs so they would get hit by a SigChecks rule that counts NULL signatures.

Standard use cases must be supported

The standardness limits need to support all currently standard use cases:

The historical usage of SigChecks reflects the above understanding; see the Historical patterns section below.

In the Historical patterns section below, it can be seen that the proposed rule is quite good in that it would only have affected six historical inputs, and even for these they would remain fully spendable just using Schnorr signatures.

It's also possible to consider a per-transaction limit, by dividing the total number of sigchecks in a transaction's executed scripts, by the total transaction bytesize. It's important to note however that a transaction consolidating many 1-of-3 bare multisigs into one output will necessarily have a density limited by the per-input rule above, and if the transaction density limit is more strict then this has the effect of limiting the number of 1-of-3 bare multisignatures that can be consolidated at once using ECDSA and possibly entirely forbidding M-of-N P2SH multisigs with high N to be spent with ECDSA. This would require such multisig wallets to either use padding (with OP_RETURN or creating additional useless outputs that will never be spent), or to disable support for ECDSA (i.e., disabling hardware wallet support) and use only Schnorr sigs.

For example, a minimum tx density of of 1/50 SigChecks/byte would impose the following restrictions on consolidations (let's say the consolidation is outputting to a single P2PKH, giving the transaction an extra overhead of 44 bytes):

Historically, thousands of transactions have been made with an overall density of just under 1/38 SigCheck/byte. These were large consolidations of 1-of-3 bare multisignatures. If the transaction density limit is set to 38, then for consolidating we would support:

Historically, only two transactions have been made with a density more than 1/38; again, today they could be spent with low density using Schnorr sigs or padding.

I've implemented the SigChecks counting mechanism and used it to crawl the entire BCH blockchain up to block 585795 (June 2019). 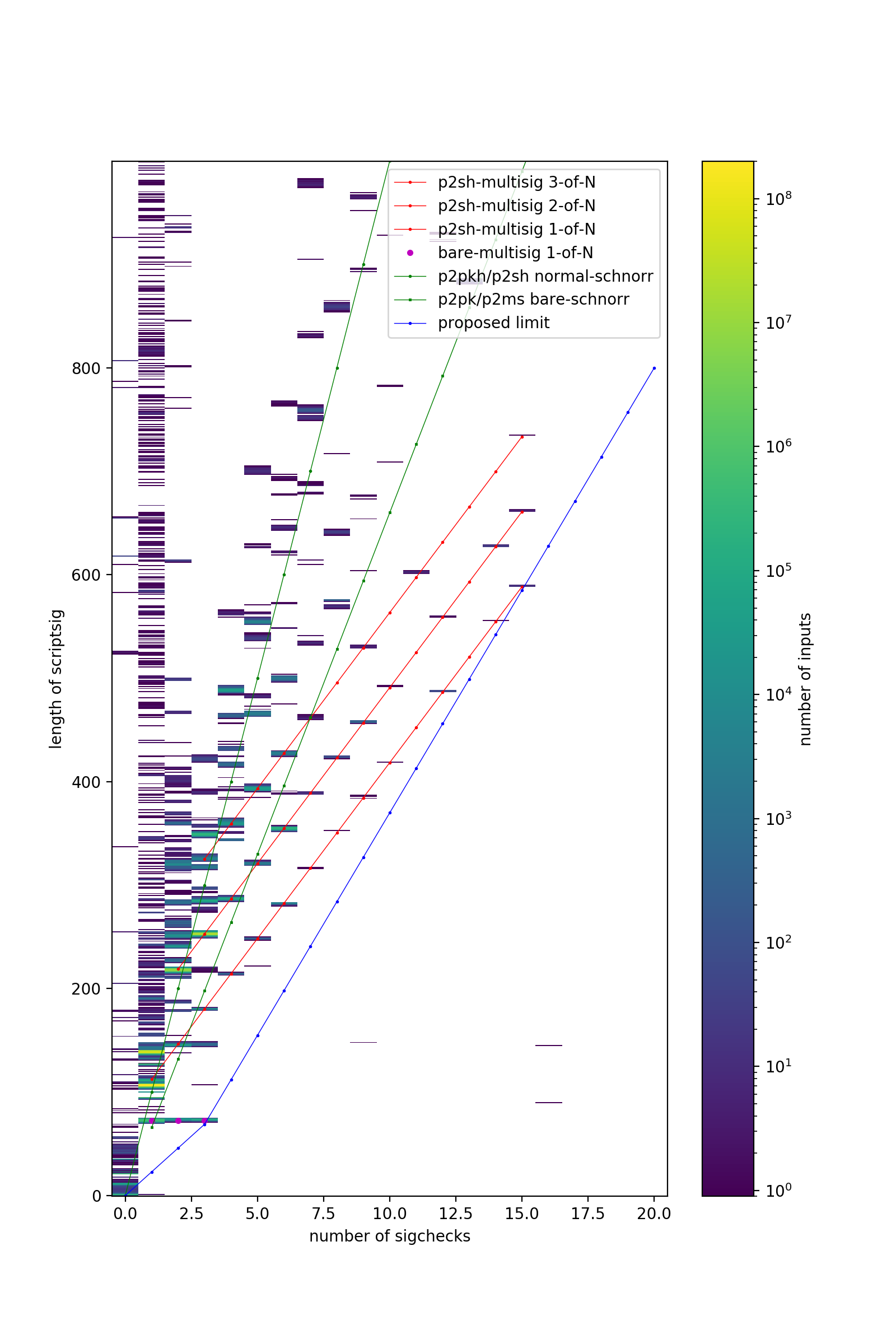 There are a total of six historical inputs that violated the proposed SigChecks rule. Note that all six would remain fully spendable even with the per-input limit, just the owners would need to choose the new OP_CHECKMULTISIG mechanics (bitfield in dummy element):

I've also compiled per-transaction density statistics from the same data set (267129100 non-coinbase transactions). Note that 5 million transactions were too low density to include in the plot (more than 300 bytes per SigCheck). 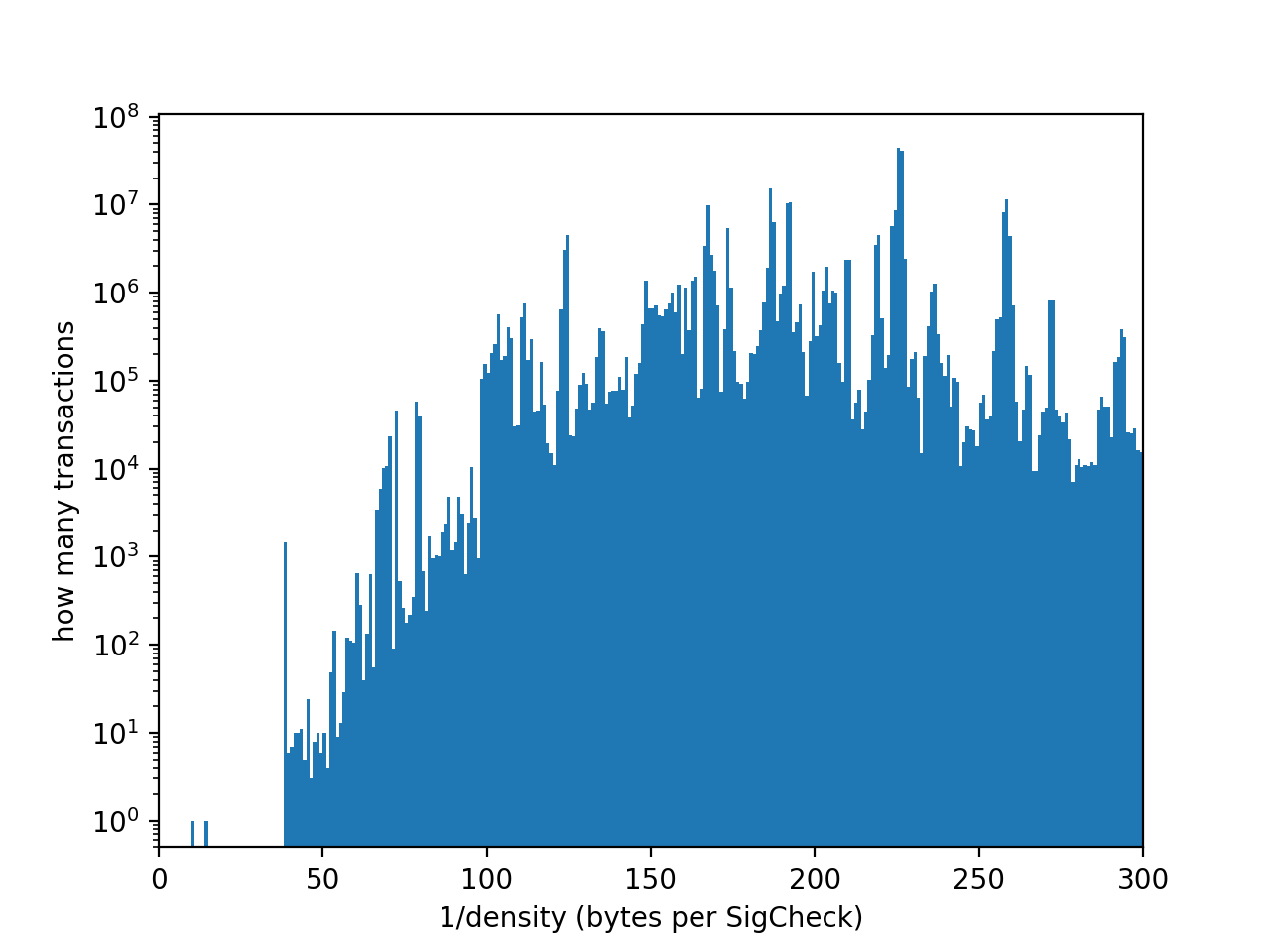 Likewise I've looked at blocks. The following plot shows distribution of block densities, excluding the coinbase transaction (which was not logged into the dataset). Note that 93575 blocks are off-plot since either they had no SigChecks or the density was too low. The highest density blocks (at just under ~ 1/38 SigChecks/byte) were #515557, #515558, and #515583 (packed full of 1-of-3 bare multisig consolidations). 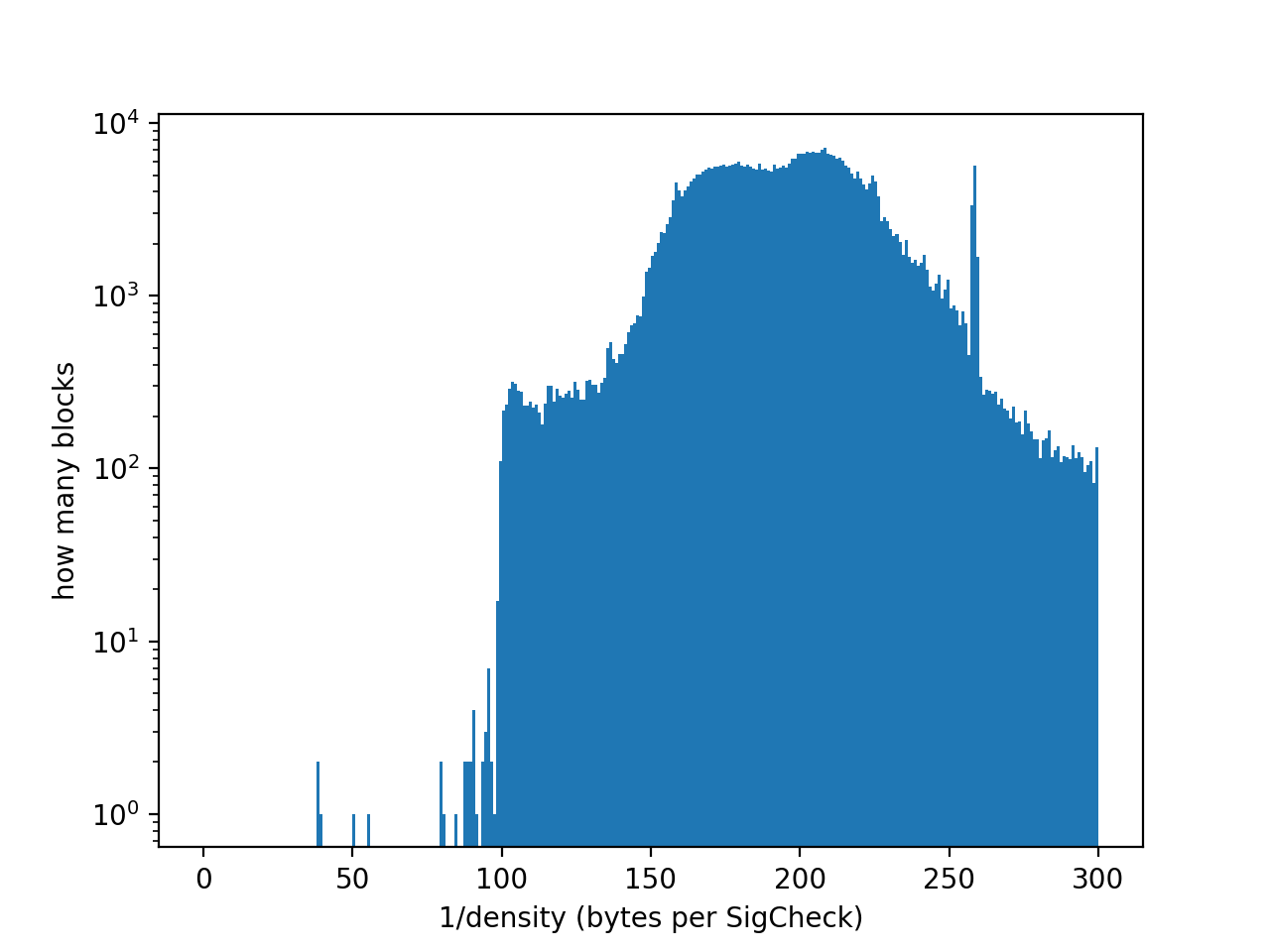 Since the block-level limit (100 bytes per sigcheck) is more sparse than the densest standard tx, this means that standard blocks can fill to the sigchecks limit before they fill up to the bytesize limit. With blocks that are largely unfilled this is not a big deal, however, in case of congestion it is best if the transaction priority takes into account sigchecks count, for high-sigchecks transactions. This can be incorporated using a 'vbytes' system, like implemented in Bitcoin Core.

(The use of vbytes is also helpful in making a simple block assembler, which only examines vbytes.) In principle the minimum fee rate calculation could be modified to use this vbytes, but that change in standardness rules is not recommended for this upgrade.