Instructions: solve the levels in ascending order, and send your code and data at guillemette@drivy.com when you’re done. We love SQL tricks, but we also value your ease to write code. You can use any langage you like as long as you have a strategy to deploy and maintain this code.

Goal: Provide the BI team a report of the occupancy rate of the fleet per city.

For a certain half-day, we define the occupancy rate as the nb of rented cars / nb of available cars.

For a half day T, a car is considered available by default. This default state can be changed to:

Each unavailability is a period defined by a start datetime and end datetime. Level of detail is half a day (AM/PM).

Rentals also are periods defined by a start datetime and end datetime with a level of detail of half a day.

Cars have a created_at datetime: they do not exist on the website before this date. 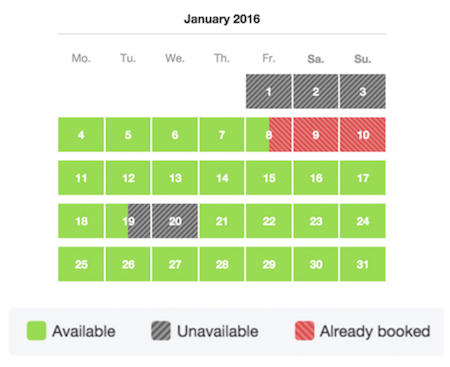 Compute the state of each car for each half day in 2015. State can be available , rented or unavailable. As a simplification you can consider that the cars with a NULL created_at field were created in 2014.

Compute the occupancy rate per week per city

We now have the data needed by the BI team and would like to automate a weekly reporting. Describe in a few lines how you would automate calculations and automatically send an extract every week.