I always knew about Stack Overflow. Some of my friends were on it from the start; they thought it made them cool, but I wasn't going to give in to peer pressure. I did that with acid washed jeans in the 80's, and still had the emotional scars. Once in a while, I'd Google for some programming help - simple things usually - and there'd I'd be, looking at another Stack Overflow answer, letting it help me.

Finally, I gave in. I remember it like it was just 3.5 years ago. I asked my first question. And then, I waited. It turned out that nobody could answer my question. But it's a cruel world out there, so maybe it was simply that nobody cared. Whatever. I didn't just sit, waiting - I figured the problem out myself. Knowing the horrible risk I was taking, I returned to the dark basement of the internet that is Stack Overflow... and posted my first answer. Yes, it was on my own question! I know that! Don't you think I know that!? But that wasn't enough. Minutes later, I was mastur-answering again, and again, an hour after that!

But that was only the beginning.

I came to spend a lot of time answering questions on Stack Overflow. So much time, that I suspect that someone in my family wrote this.

Eventually, answering didn't give me the rush that I'd come to crave. So I started editing other people's posts. Just a little, at the start. No big deal. Corrected some spelling, restructured a few sentences, that sort of thing. Everyone does it - I bet you've even done it!

Before long, I was queuing up with the other junkies, doing reviews at any hour of the night. That introduced me to harder stuff - it was where I first learned the sweet oblivion of voting to close. You see - until then, I thought that every question that had been posted was OK. Inside my head, a little voice kept saying that couldn't be the case, but if bad questions weren't OK, surely they'd get deleted, right? My dabbling with editing had made the world just a little better... but suddenly, with my new little friend... I could do something other than simply give in to feelings of helplessness! I could vote... to delete all teh things!

Even that started carefully. On May 24, 2013, around 9am, I had my first hit. Then later the same day, two more in quick succession. That was enough - I saw the spiral of addiction starting to pull me down, so I quit. Cold turkey.

But then, four days later, I was back in the queue for three more hits. Then the next day, it was fourteen! Before long, I was hitting the queue hard. I continued that way for a couple of years. I met a few other people in my travels, and got used to seeing names like "rene" and "Undo" next to mine on question close notices.

Eventually, I needed more - and learned about Tag Burnination. I learned that one-person burnination could be done, but was lonely. The type of organization that it takes for effective burnination naturally spawns cult-like groups of people repeating the same rituals together, day after day after day... finally, in July 2015, I met some gurus of one of those cults - some would say the very best of those shadowy groups. They went by the cryptic names "NathanOliver" and "Durron597", and hailed from a place called "SOCVR", and they drew me in to the circle by a simple burnination post.

Once they accepted me as one of their own, I was at peace. I could ask questions in a "chat room" about how the site worked. I learned so much more than was written in the help and FAQ pages. There, the word "plop" was used as a greeting - not just onomatopoeia. I learned about the dark magic of the Roomba, and was initiated into the ritual of downvoting questions and answers so they would disappear; a ritual that survives only as horrible memories and whispered rumours today.

The time when that ritual was stopped became known as The Day, and I was there, taking my lumps with my bretheren and sisteren. With them, I arose from the ashes like a... I was going to say phoenix, but really, more like a slightly disheveled raven would be more accurate. Or maybe a condor? Are they dark-coloured? I know they eat dead things, which is kind of like going after bad posts. Just let me check Wikipedia... Yeah, yeah - a condor sounds good. We arose like a... oh, never mind the allegory, it's gotten out of hand. We listened, we learned, we adapted, and got stronger.

I suffered withdrawal for a while after SOCVR ceased organized burnination activities. But after a while I found I could think more clearly, and invested more time in coaching newbies to make their first posts better, and participated in more group discussion in SOCVR about the how, when and what-to-do related to community moderation.

And now, I feel that all that history has prepared me to serve as a Room Owner in SOCVR. I'm generally level-headed, contributing regularly to discussions in the room, offering advice, and just as importantly asking for and taking it graciously. I'm tolerant of people's differences, but believe that social norms need to be respected to maintain working relationships and productivity. I like to have fun as well, and I enjoy the word-play, poetry, and memes that are a regular part of the day in SOCVR! 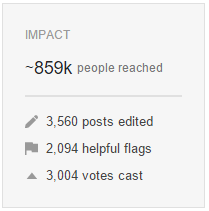 Outside of Stack Overflow, I'm a senior member of a software development team, with 25+ years of professional experience in programming, management, and education. I coach sports teams, mentor robotics students, and volunteer in leadership roles in my community. That provides me, and by extension, the SOCVR team, with a wealth of experience that can help keep us productively grooming the site.

Thanks for indulging me!