On a shared hosting service like dreamhost, how do you get your twitter bot up and running? Problems:

I'm still figuring this stuff out myself, so nothing is clear as it should be. Hope this page will be a resource that will improve over time.

where should I put my script?

Python's virtualenv lets you make your own private python where you can install modules without root access. http://docs.python-guide.org/en/latest/dev/virtualenvs/

You need shell access to get everything set up, but once it's set up, you can edit your actual script over ftp or with Coda or whatever you like.

See dreamhostpython.sh-session below for an actual shell session where I made a virtualenv and installed tweepy. Here's commentary on that session.

The command virtualenv mynewbot will make a new python virtual environment in a new directory called mynewbot. Then cd mynewbot to enter that directory, and source bin/activate to tell python you want to use this virtualenv.

The first thing I tried to do in my new virtualenv was install tweepy, the python twitter module - but it failed because dreamhost supplies an ancient version of pip, the python module installer. Luckily, you can upgrade pip inside the virtualenv with the command pip install --upgrade pip

To test your script, you'll probably want to run it from the dreamhost shell, like in my transcript below, but later you'll want to make it run autonomously, probably from a scheduled cron job. Issues:

Here's a screenshot from the dreamhost control panel, under goodies / crontab, for running the example test.sh: 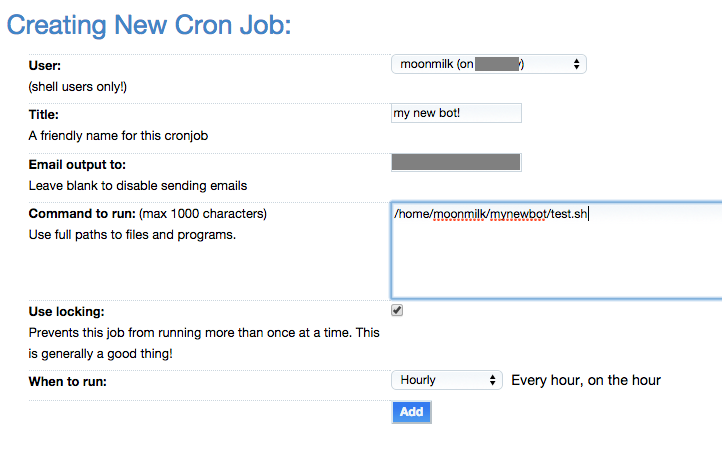