A few days ago I used GitHub Actions on a project of mine for the first time. Overall the outcome was very positive, but there was also some work involved. Hopefully, this post can help you do the same at a lower cost!

Create a .github/workflows directory at the root of your project:

and, in that directory, create one or more YAML file with the name of your choice.

In my case I created two files: 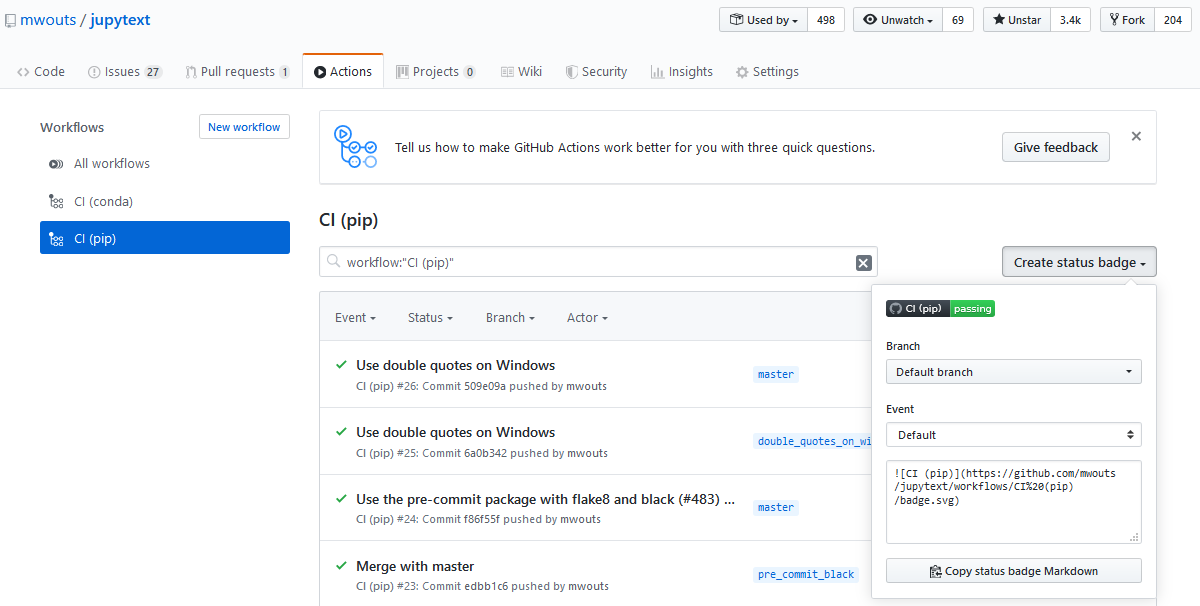 Trigger on push or pull_request events?

With the on field, you choose which events should trigger an action. I initially tried on: [push, pull_request], but I soon had the feeling that too many builds were triggered. Now I use on: [push] and that seems to be enough. With this, contributors receive an email when one of their commits breaks the CI, so they can fix the issue before opening a pull request. And with on: [push] already, you get status updates in the pull request: 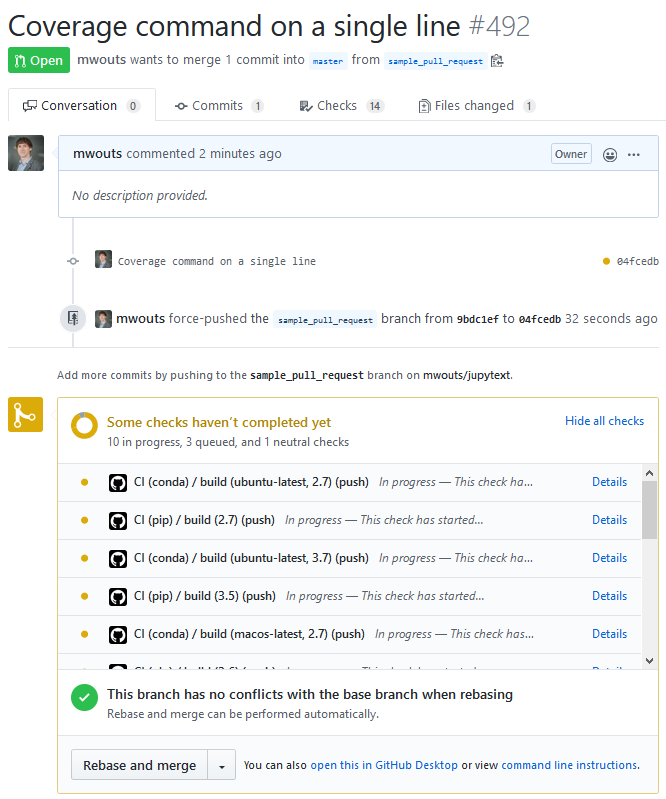 And, a few minutes later: 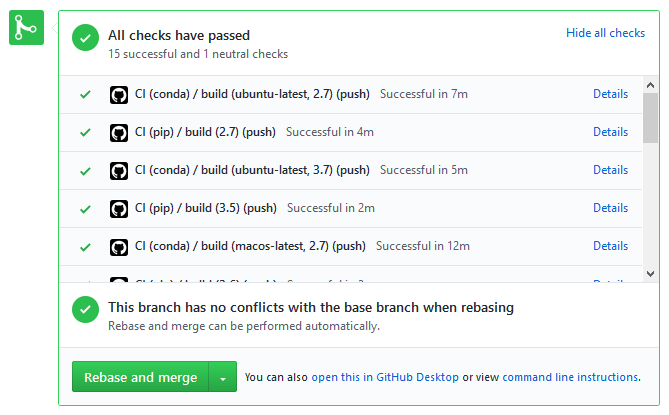 Python code is portable, but in practice, I prefer to test my code on various platforms.

In my project, I want to test

Note that I don't need to test the full matrix (30 jobs). If I test all the Python versions with pip and Linux, and Python 2.7 and 3.7 with conda on all the possible OS (11 jobs), then I can already be confident that my program is going to work almost everywhere.

Let's start with pip, which is super easy to set up. Here is an extract of my continuous-integration-pip.yml file, that shows:

Now we head on to conda. This extract of my continuous-integration-conda.yml file shows:

Before running any test, it is a good idea to make sure that all the code is valid, which I do with flake8.

The corresponding step in my continuous-integration-pip.yml file is

In the continuous-integration-conda.yml, an additional shell parameter was required. I first tried shell: pwsh (PowerShell), and it worked, so I am now using

I had initially an issue with the flake8 step. The error was:

My understanding is that /home/runner/work/_temp/98d1db20-f0af-4eba-af95-cb39421c77b0.sh is a temporary script that contains the commands for that step. So when we are told that the script throws this error: line 3: syntax error near unexpected token `(', we should look at the third line of the run property of that step. In my command, that was all Python files should follow PEP8 (except some notebooks, see setup.cfg), and indeed it was missing a comment char!

Once we are positive that the code is syntactically correct, we want to know whether all the unit tests pass. The corresponding step is:

Note that I use coverage run --source=. -m py.test and not just pytest because I also want to know the code coverage. Also, for the conda file, we need to add a shell: pwsh property, otherwise, the coverage or pytest command is not found.

It's good to have the coverage computed in the CI, but it is even better to have a coverage update on pull requests, and a coverage badge in the README. For this, I use codecov. I prefer to upload the coverage only for the conda CI as it lets me test a larger fraction of the optional features. The coverage upload step is the last one in continuous-integration-conda.yml:

With this, I get a coverage badge

which I can add to my README, detailed coverage statistics and charts at codecov.io, as well as coverage reports in pull requests: 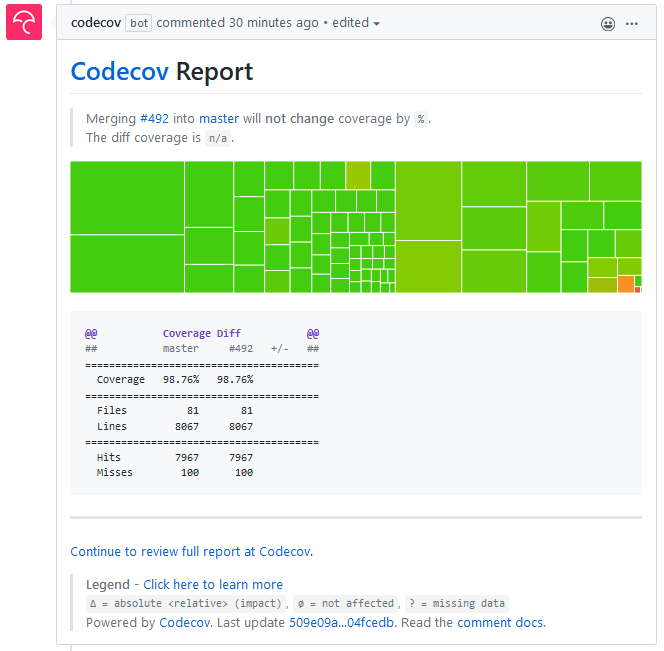 One feature that surprised me at first, but makes sense, is the automated job cancellation. When one job in the CI fails, all the other jobs that are still running or pending are canceled.

Here is an example of this on my project - a problem occurs with the Windows build, and that triggers the cancellation of the remaining Windows and Mac OS jobs: 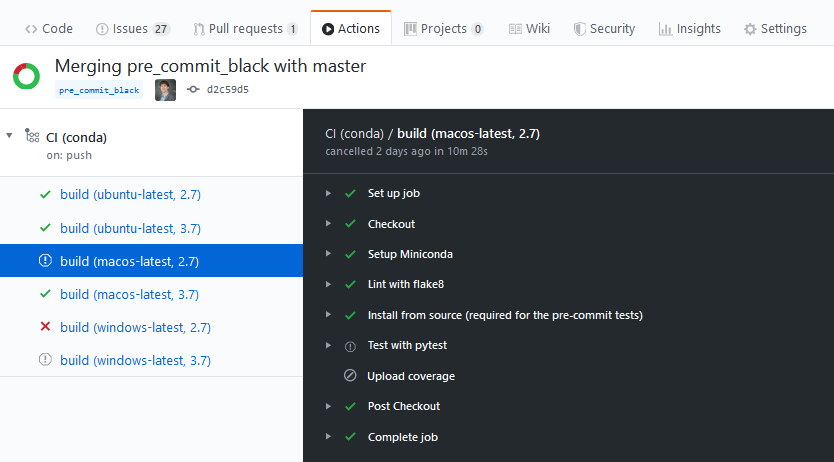 Before discovering GitHub Actions, I was using Travis-CI. And I loved it! I have used Travis-CI on many projects, including this fancy one where we test... the README itself!

Now I will conclude with a brief comparison between the two.

Thanks for reading this! If you want to read more, have a look at my other posts on Medium, at my open source projects on GitHub, or follow me on Twitter. Also, if you have experience with GitHub Actions in other contexts, if you know e.g. how to publish documentation online, please let us know with a comment here, or feel free to open an issue or make a pull request on this repo!