What is Cassandra DB?

Cassandra is written in Java and was open-sourced by Facebook in July 2008. This original version of Cassandra was written primarily by an ex-employee from Amazon and one from Microsoft. It was strongly influenced by Dynamo, Amazon’s pioneering distributed key/value database. Cassandra implements a Dynamo-style replication model with no single point of failure, but adds a more powerful “column family” data model.

Cassandra has become so popular because of its outstanding technical features. It isdurable, seamlessly scalable, and tuneably consistent. It performs blazingly fast writes, can store hundreds of terabytes of data, and is decentralized and symmetrical so there’sno single point of failure. It is highly available and offers a schema-free data model

Where Can I use Cassandra DB?

How can we speed up current RDBMS?

Now we have the problem of data replication and consistency during regular usage and in failover scenarios. So we need to update the configuration of the database management system. This might mean optimizing the channels the database uses to write to the underlying filesystem. We turn off logging or journaling, which frequently is not adesirable (or, depending on your situation, legal) option.

Phase 1 - Each server that needs to commit data writes its data records to the log. If a server is unsuccessful, it responds with a failure message. If successful, the server replies with an OK message.

The main problem is that you need to lock resources on all nodes.

The idea here is that you split the data so that instead of hosting all of it on a single server or replicating all of the data on all of the servers in a cluster, you divide up portions of the data horizontally and host them each separately.

It seems clear that in order to shard, you need to find a good key by which to order your records. For example, you could divide your customer records across 26 machines,one for each letter of the alphabet, with each hosting only the records for customers whose last names start with that particular letter.

The main problem that it’s hard to split data equally.

The Cassandra database is a shared-nothing architecture, as it has no central controller and no notion of master/slave; all of its nodes are the same.

Cassandra does partition across nodes (because if you can’t split it you can’t scale it). All of the data for a Cassandra cluster is divided up onto “the ring” and each node on the ring is responsible for one or more key ranges. You have control over the Partitioner (e.g. Random, Ordered) and how many nodes on the ring a key/column should be replicated to based on your requirements.

Cassandra is distributed, which means that it is capable of running on multiple machines while appearing to users as a unified whole.
The fact that Cassandra is decentralized means that there is no single point of failure. All of the nodes in a Cassandra cluster function exactly the same.

Elastic scalability refers to a special property of horizontal scalability. It means that your cluster can seamlessly scale up and scale back down.

Cassandra is highly available and fault tolerant. You can replace failed nodes in the cluster with no downtime, and you can replicate data to multiple data centers to offer improved local performance and prevent downtime if one data center experiences a catastrophe such as fire or flood

Consistency essentially means that a read always returns the most recently written value.

The consistency level is a setting that clients must specify on every operation and that allows you to decide how many replicas in the cluster must acknowledge a write operation or respond to a read operation in order to be considered successful. That’s thepart where Cassandra has pushed the decision for determining consistency out to theclient. 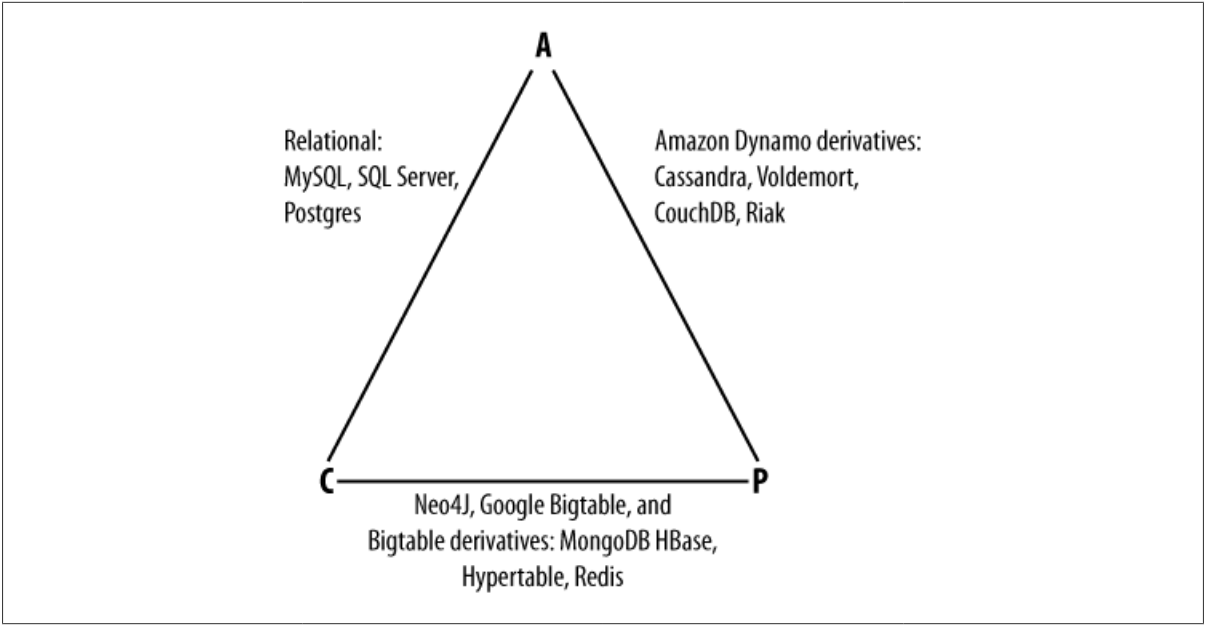 The database contains tables. Tables have names and contain one or more columns, which also have names. When we add data to a table, we specify a value for every column defined; if we don’t have a value for a particular column, we use null. This new entry adds a row to the table, which we can later read if we know the row’s unique identifier (primary key), or by using a SQL statement that expresses some criteria that row might meet. If we want to update values in the table, we can update all of the rows or just some of them, depending on the filter we use in a “where” clause of our SQL statement.

Cassandra stores data in other way. So we need something that will group some of the column values together in a distinctly addressable group. We need a key to reference a group of columns that should be treated together as a set. We need rows. Then, if we get a single row, we can get all of the name/value pairs for a single entity at once, or just get the values for the names we’re interested in. We could call these name/value pairs columns. We could call each separate entity that holds some set of columns rows. And the unique identifier for each row could be called a row key.

Instead of storing null for those values we don’t know, which would waste space, we just won’t store that column at all for that row. So now we have a sparse, multidimensional array structure that looks like this.

These aren’t the Columns you’re looking for. . .

Columns are immutable in order to prevent multithreading issues.
Columns have the timestamp, which records the last time the column was updated. This is not an automatic metadata property, how-ever; clients have to provide the timestamp along with the value when they perform writes. You cannot query by the timestamp; it is used purely for conflict resolution on the server side.

Column family has two attributes: a name and a comparator. The comparator value indicates how columns will be sorted when they are returned to you in a query—according to long, byte, UTF8,or other ordering.

So while it’s not incorrect to call it column-oriented, or columnar, it might be easier to understand the model if you think of rows as containers for columns. This is also why some people refer to Cassandra column families as similar to a four-dimensional hash: [Keyspace][ColumnFamily][Key][Column]

Cluster is a ring.

Cassandra database is specifically designed to be distributed over several machines operating together that appear as a single instance to the end user. So the outermost structure in Cassandra is the cluster, sometimes called thering, because Cassandra assigns data to nodes in the cluster by arranging them in a ring.

A node holds a replica for different ranges of data. If the first node goes down, a replica can respond to queries. The peer-to-peer protocol allows the data to replicate across nodes in a manner transparent to the user, and the replication factor is the number of machines in your cluster that will receive copies of the same data

The replica placement refers to how the replicas will be placed in the ring.
There are different strategies that ship with Cassandra for determining which nodes will get copies of which keys.

There are a few additional parameters that you can define for each column family.

Columns have another aspect to their definition. In Cassandra, you specify how column names will be compared for sort order when results are returned to the client. Columns are sorted by the “Compare With” type defined on their enclosing column family, andyou can choose from the following:

Each column family is stored on disk in its own separate file. So to optimize performance, it’s important to keep columns that you are likely to query together in the same column family, and a super column can be helpful for this.

Here we see some more of the richness of the data model. When using regular columns,as we saw earlier, Cassandra looks like a four-dimensional hashtable. But for supercolumns, it becomes more like a five-dimensional hash: [Keyspace][ColumnFamily][Key][SuperColumn][SubColumn]

There is an important consideration when modeling with super columns: Cassandra does not index subcolumns, so when you load a super column into memory, all of its columns are loaded as well. This limitation was discovered by Ryan King, the Cassandra lead at Twitter. It might be fixed in a future release, but the change is pending an update to the underlying storage file (the SSTable).

You can use a composite key of your own design to help you with queries. A composite key might be something like <userid:lastupdate>. This could just be something that you consider when modeling, and then check back on later when you come to a hardware sizing exercise. But if your data model anticipates more than several thousand subcolumns, you might want to take a different approach and not use super columns.

The alternative involves creating a composite key. Instead of representing columns within a super column, the composite key approach means that you use a regular column family with regular columns, and then employ a custom delimiter in your key name and parse it on client retrieval.