Kyle Simpson (@getify) wrote a very thoughtful post decrying optimize-js, which is a tool I wrote that exploits known optimizations in JavaScript engines to make JS bundles parse faster (especially minified bundles, due to what could be reasonably described as a bug in Uglify).

Kyle lays out a good case, but I tend to disagree with nearly all his points. So here's my rebuttal.

Yay, right!?!? Right? Look how clever we are, outsmarting the browser at its own game. Humans 1, Computers 0.

Yes, we absolutely can outsmart the browser. optimize-js barely scratches the surface of the optimizations you can make, once you realize that:

Right now the optimize-js algorithm is pretty simple: paren-wrap all true IIFEs (whatever their form), and also wrap functions-passed-to-functions (because this catches module definitions like AMD/UMD, Browserify, etc.). However you could imagine further optimizations, such as:

The possibilities go on and on, once you realize you've got the full AST to work with, and all the time in the world to apply transformations to it.

So sure, in its current implementation, optimize-js is gonna have a few false positives. But that's not an argument against the approach itself; it's an argument to improve it.

Over time, JS engines will start to realize that most code is being parsed immediately, and not much JITing is happening. They'll realize the heuristics need to change, to get back to a better balance.

This has happened since time immemorial. For instance, Chakra is already optimizing for weirdo Uglify patterns because that's what we see out there in the wild.

If Uglify were to remove the !function(){}()-style IIFEs, it would immediately negate the hard-won optimizations Chakra has implemented for Uglify (namely to check for ! before function) and Chakra would have to try to find new optimizations. It's a cat-and-mouse game.

This is a major plank of Kyle's argument against optimize-js, and it's the part I find least persuasive. I'll make my case by way of analogy:

Ugh, all these JavaScript minifiers are teaching developers the wrong patterns! Soon they'll start naming all their variables e and t, because they have some vague notion it's "faster."

Gzip is a blight on our industry! Developers are going to start thinking it's okay to repeat the same boilerplate code over and over again, because hey, "gzip will take care of it, right?"

I never intended optimize-js as anything other than a compiler step, and in fact my hope is that it can provide optimizations that folks wouldn't be able to implement themselves (e.g. the lazy-module example above). We've been optimizing JavaScript for browser delivery since we first started minifying/gzipping; I see optimize-js as part of the same time-honored tradition.

As for Kyle's arguments about !important and translateZ(), I find that comparison pretty strained because, again, I consider optimize-js a compiler step, not an authoring concern. If we had had better compilers back in the day, then arguably we could have done the "cache the length of an array in a for-loop" sort of stuff in a compiler as well, where it's easier to remove once engines improve and the optimization is no longer needed.

It's just a flesh wound

Stop doing silly stuff for the sake of saving a few milliseconds.

I work on the performance team for Microsoft Edge. A big part of my job is meeting with webdev teams (internal and external) and analyzing their website to determine why it's running so slow.

100% of the time (and that is not an exaggeration) their biggest problem with performance is that they are running too much JavaScript on initial load. This is the thing that's absolutely killing performance on the web these days, and especially the mobile web: we're shipping megabytes of JavaScript on initial page load, slowing down the time-to-first-interaction (and often time-to-first-paint sadly) and making the overall experience of the web suck. 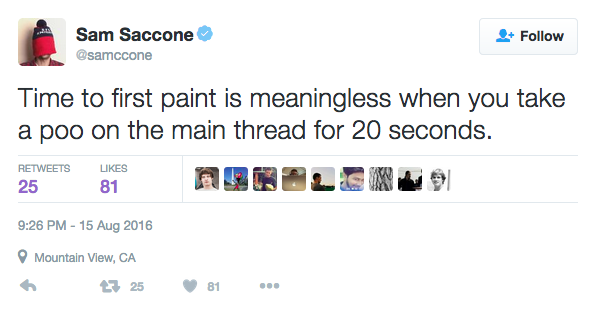 I wish Sam were exaggerating about the "20 seconds" thing. I've seen even worse.

There are lots of potential solutions to this problem (code splitting, PRPL, not writing so much damn JavaScript), and I don't claim any one of them to be the silver bullet. But if I can get Ember to load in 1 millisecond instead of 70 (on desktop!) or an 8MB JavaScript file to parse 30% faster, then that's not money I'm going to leave on the table.