Recently, I have been working on the openshift-auto-upi project, which automates UPI deployments of OpenShift. I was looking for a way to configure OpenShift nodes with static IP addresses. After several failed attempts, I found a working approach that can be easily automated. If you prefer using static IPs over the default DHCP provisioning, please read on as I share my approach with you.

Current OpenShift installation methods assume that network configuration of OpenShift nodes is done via DHCP. If you are not interested in using DHCP, official installation guides won't help you any further. After searching on the Internet, I found several approaches that accomplish static IP configuration:

The coreos-iso-maker approach appealed to me as it allows for full automation of the installation process. The one thing that I was less fond of though, was using the bare metal installation process on virtualization platforms like vSphere or RHEV. What's the problem? While bare metal installation works for vSphere and RHEV, the problem is that it doesn't leverage the capabilities of these platforms to their full extent. For example, when installing on vSphere, you upload the CoreOS machine image into the vSphere datastore only once. From there, the machine image is accessible to hypervisors while heavily leveraging memory sharing and caching to preserve hardware resources. In contrast, if you deploy OpenShift on vSphere using the bare metal installation method, you will end up with independent machine images. The optimizations to preserve hardware resources are no longer possible.

So, how can we achieve static IPs while leveraging the existing installation methods? The approach is in a nutshell:

In the following sections, I am going to walk you through the steps outlined above. We will boot an OpenShift CoreOS image on vSphere using static IP configuration. Note that I used a RHEL8 machine to run the commands in this blog post.

Let's start off with obtaining an OpenShift CoreOS image. Visit the OpenShift 4 image repo and download an image that you want to use for OpenShift deployment. I am going to be installing OpenShift 4.3 on vSphere, so I downloaded the latest VMware image for OpenShift 4.3 called rhcos-4.3.8-x86_64-vmware.x86_64.ova

The OVA file format is a tar archive that contains an XML descriptor desc.ovf and a virtual machine disk image disk.vmdk. You can untar the OVA file with:

Next, convert the VMware disk image to a raw binary image:

The previous command creates a file disk.raw in the current working directory. This file is a raw binary image of the virtual machine disk. We can explore it using the fdisk command:

You can now inspect the GRUB bootloader script used by the Red Hat CoreOS OpenShift image. In the following sample output, I am showing only the end part of the script which we will discuss further. This part is responsible for the initial network configuration:

GRUB is a very powerul bootloader that can be configured in many ways. You can refer to the GNU GRUB Manual for further information on GRUB configuration.

In this section, we will create a bootable ISO image that will include a customized GRUB script. First, create the required directory structure:

Next, copy the original GRUB script found on the OpenShift image to the ISO image:

After we copied the GRUB script out of the original OpenShift image, we can unmount the OpenShift disk partition. It won't be needed anymore:

We are now ready to customize the GRUB configuration:

This is the network configuration from the original grub.cfg script:

In order to provision the ens192 network interface with a static IP, I changed the above line to read:

Based on the above network settings, dracut will generate a network configuration file /etc/sysconfig/network-scripts/ifcfg-ens192 that will look as follows:

The above configuration uses dracut to statically configure a network interface. You can refer to dracut.cmdline man page for a complete list of dracut kernel command line options.

After we've finished off the changes to the GRUB script, we can include it on a bootable ISO image. As the original Red Hat CoreOS image is capable of booting on machines with BIOS as well as EFI firmware, we are going to create an ISO image that supports both firmwares as well.

Install xorriso and mtools rpms that are used by grub2-mkrescue while creating the ISO image:

An ISO image staticip.iso of about 13 MB in size should be sitting in your working directory now.

In order to boot a Red Hat CoreOS virtual machine using the custom ISO image, you can follow these steps:

After the virtual machine has started booting, you can switch to the machine console. When the GRUB menu appears on the screen, press 'e' to display the details of the currently selected item. Verify that your network parameters have been included in the kernel command-line: 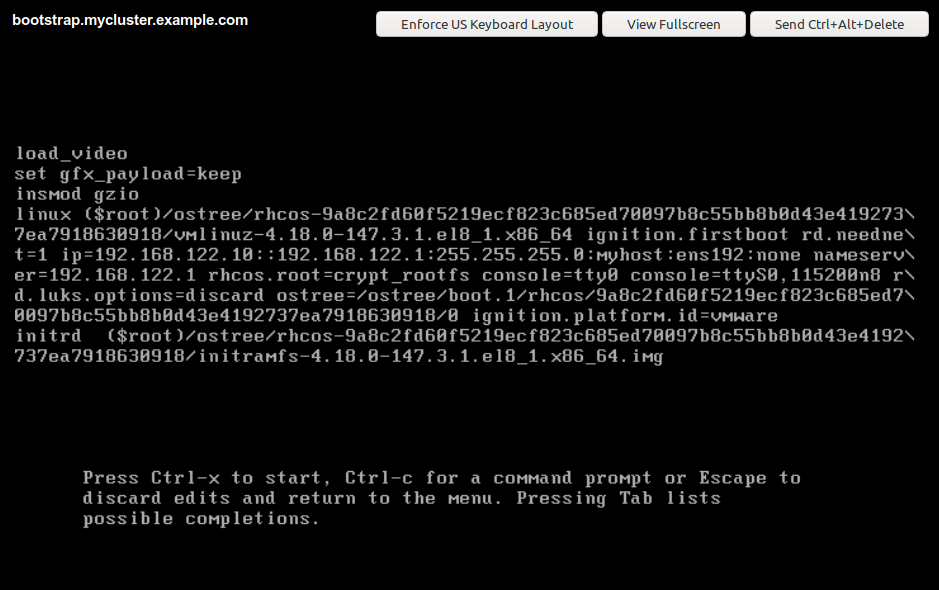 After the machine boots up successfully and the ignition tool completes the first-boot setup, you can configure the virtual machine to go back to booting from the original Red Hat CoreOS disk image. You can change the device boot order and place the first hard-drive back on top. Alternatively, you can disconnect the CD-ROM drive from the virtual machine altogether.

In this blog post, we reviewed existing approaches to configure OpenShift nodes with static IP addresses. An alternative approach was demonstrated, which allows for using the existing OpenShift installation methods and introduces only minimum modifications.

The openshift-auto-upi is hosted on GitHub. If you are interested in installing OpenShift on bare metal, libvirt, RHEV, or vSphere using static IPs, I recommend that you check out openshift-auto-upi. The static IP configuration described in this blog will be implemented in one of the future releases of this project.