This is a copy of the post from the locked issue https://github.com/cl-library-docs/common-lisp-libraries/issues/3#issuecomment-732563750 made available as a separate gist for clarity and posterity. 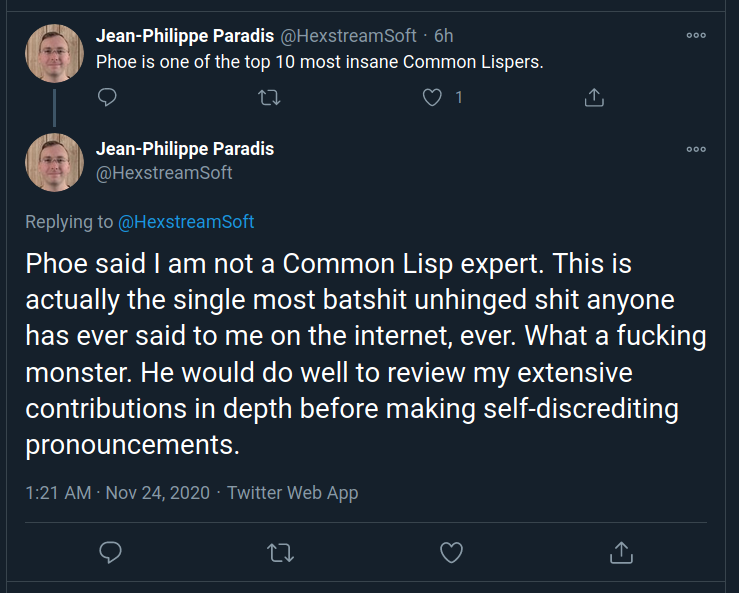 Allow me to review your claims of having a huge positive impact on the Common Lisp community. My review is based on your CV, the current Quicklisp dist, and your public GitHub activity. I assume that your next tweet will link to this post as a proof that I have done exactly what you've asked of me, and so your fans can get to know the AFAIK first public analysis and independent piece of research into Hexstream's impact on the Common Lisp community.

Once again, I am doing this in my free time, since I consider this analysis to be important for the Common Lisp community as a whole.

You have been self-employed for fifteen years with no commercial success and no money earned until April 2020, when, according to a tweet of yours, you got your first GitHub Sponsors donation. Therefore, looking from the financial point of view, you have been unemployed for almost 15 years and this state of matters only changed seven months ago. Your above claims of having five years of commercial experience are therefore made void by your own words, as commercial experience implies commerce, which in turn implies some kind of currency exchange.

You have deleted the old code that you have created by proclaiming your projects unworthy of your attention; I have no reason to doubt your instinct on this and I will therefore consider this code unessential and therefore not contributing to your impact on the Common Lisp community.

You have 30+ micro-libraries on Quicklisp that are mentioned as "my newer, suitably engineered, documented, actually worthwhile projects" on your CV page, which contradicts your claim from up above that this library is old and almost unmaintained. These libraries, if we exclude their associated test systems, are used by no other Quicklisp projects whatsoever, which means that these libraries have no public impact whatsoever among Lisp programmers who push their own code to Quicklisp.

The below code snippet should allow anyone to reproduce my findings using the standard Quicklisp dist as well as verify individual steps of this computation for correctness.

The issue/PR information of the aforementioned Common Lisp repositories (7 meaningful issues in total) shows very little information that can prove real-world usage of these libraries.

This leaves us with three issues in total.

This information alone is not statistically significant enough to state that there is some actual production use of these libraries.

You have created a list of annotated Common Lisp symbols with your personal notes, examples, and tips, which is in a mostly incomplete state, but has some nice notes.

You have created a rendering CLOS MOP specification that has several usability issues, mostly related to the presentation layer; the series of arrows and anchors in the corner is non-intuitive, a bit ugly, and has no way of being turned off. I suspect that this work would have been welcome into the ecosystem if not for the insistence, entitlement, and aggression with which you attempted to push it into the Common Lisp ecosystem and the later vulgarity that was thrown at some members of the Common Lisp community in retaliation for your contribution not being accepted due to the aforementioned aggression.

You have created a useful format cheatsheet that I consider to be your most important work so far since it duplicates no other known Lisp resource; I am not aware of any other, or better, tabular format reference. Still, it has suffered the same fate as above - an example of a fine resource sinking because of your aggressive personality and your blaming of the consequences of your own violence on Xach and the Common Lisp Mafia.

You have created a list of Common Lisp programmers that you still have not removed me from despite my repeated and explicit requests to do so, which is a strict net negative due to it basically erasing whatever trust I may have towards you as a member of the Common Lisp community.

I am explicitly skipping the EZ-Planck and TypeMatrix 2030 projects since these are mechanical keyboard projects and we are evaluating your impact on the Common Lisp community.

You have 12 (11 official + 1 re-authored) commits in Lisp-related GitHub repositories that do not belong to you. I am explicitly skipping non-Lisp repositories since these are off-topic to evaluating your impact on the Common Lisp community.

Out of these 12 commits, 6 are related to adding crowdfunding links to the respective repositories, 5 are related to promoting your own work or groups you administer (HexStreamSoft, CLOS MOP, Keybase chat, updating tarballs on Quicklisp), and one is a typo fix.

You have opened 16 pull requests on Lisp-related repositories that you do not own. Counting out the 12 pull requests from above which were merged, this means that 4 of those are still open or have been closed:

2 of those PRs are related to adding crowdfunding links to the respective repositories, while 2 are rerelated to promoting your work (CLOS MOP).

You have opened 40 issues on https://github.com/quicklisp/quicklisp-projects in order to maintain your libraries in the main Quicklisp dist, and commented on 23 issues made by others in this repository.

You have opened 3 issues on https://github.com/quicklisp/quicklisp-client related to various improvements in the Quicklisp client, and commented on 6 issues made by others in this repository.

You have opened 11 issues on https://github.com/ultralisp/ultralisp related to various improvements in Ultralisp, and commented on 12 issues made by others in this repository.

I am not willing to analyze the contents of your issues or comments because I am too tired of reading your countless rants or to try and make any sense in them. If anyone else feels like having a go at it, please, go ahead; GitHub history is public.

And there is you, with an amount of code equivalent to a single utility library of size comparable to perhaps Alexandria, except with zero of the popularity of Alexandria; a format cheatsheet that has a very nice idea but is a week's worth of net HTML work to redo from scratch; a MOP reference that is a duplicate of an already existing reference; absolutely zero interest in any codebase that is not of your own making; and, sadly but also most importantly of them all, a social apparatus that voids all of this merit by making their author impossible to tolerate.

You seem to abhor all foreign codebases. This stands out because your commits and pull requests, as few as they are, are only related to adding crowdfunding links and insistently promoting your work, with the exception of one pull request that is not even technical because it fixes a typo in a documentation file. This means that your expertise with codebases from other authors is an absolute and complete nil, and this is still before counting your unwillingness to work on them or even read their code whatsoever. This, in turn, means that your expertise with existing, real-life Common Lisp projects (which are naturally written by other people over various spans of time) is not just a nil, it's a net negative. A newbie will likely do better than you because of their lack of prejudice towards codebases written by other people or that follow different style guidelines.

At this point calling you a Common Lisp expert would be a slap in the face to all the various people I have mentioned three paragraphs above.

(Two paragraphs removed; they were getting personal, which is unnecessary in this context.)